Singer Jordan Smith electrified the judges and audience alike with a powerhouse voice that crowned him “The Voice” Season 9 champion in 2015.

That same year, Smith became the “best-selling artist in the history of The Voice,” but he refuses to take credit for his wild successes. He’s always made an effort to put God center stage, both through singing worship songs to the masses and speaking openly about his Christian faith.

Smith recently shared that he’s “returning” his gift back to God through the release of his first Christian single and album.

“It’s really special for me to take this moment and say back to the Lord, ‘let everything I am declare your glory, to help tell your story, the story of your Gospel,'” he told the Christian Post. “Let everything I am point the world back to You.”

After signing a deal with Provident Label Group/Sony Music, the 27-year-old has dropped the highly anticipated Christian single, “Great You Are.”

Since the beginning, Smith’s faith has been the “DNA of his music,” even when competing in the pop mainstream music area; but now, he’s ready to share his passion for Jesus in a bolder way.

“When we wrote this song…I knew it was special,” said Smith. “But I didn’t take a moment and stop and think about how special it was for me as an artist and the journey that I’ve been on since ‘The Voice.’”

“The song itself just says, ‘Everything I am I lay it down here at your feet, and I’m returning this to you,’” he explained of the new single.

“It’s really special for me to be able to have the moment to return my gift to the Lord and to point the glory back to Him,” the Kentucky songwriter continued. “We are all just that; we’re just reflections of God’s love to the world.”

Smith wrote “Great You Are” in conjunction with Matt Armstrong and Jeff Soika. The riveting lyrics were inspired by Luke 19:40, in which Jesus declares the rocks will cry out and praise Him if people refuse to do so. 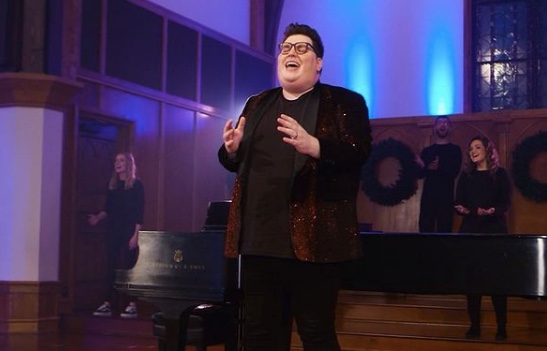 The Christian artist explained that the last year trademarked by the COVID pandemic has been a time of increased distraction, fear, and anxiety—both in his own life, and for society at large.

With ramped up chaos and uncertainty, Smith has felt even more compelled to keep his eyes fixed on God:

“The last year, year-and-a-half, it’s been so easy to be distracted by the waves, by the things that are going on, by the political climate. It’s just easy to get sucked in and become so fearful and worried,” said Smith. “Anxiety is at an all-time high. Even in my own life, I find myself feeling anxious and concerned about things that are happening. I’m feeling a bit out of control because I don’t have control over everything that’s going on. I’m kind of a control freak, so that’s an issue for me.”

Though we may ride a wave of emotions, along with hills and valleys, Smith asserts that God is unwavering through it all:

“He’s always faithful, He’s constant, He’s good, and He loves us unconditionally. It’s important to stop and remind ourselves of just how good He is and how faithful He is in our lives. Whenever we lay down all of those heartbreaks, all of those trials, all of those, even blessings, down to Him, it’s just refreshing. It brings new life to our spirit, and I hope that that’s what the song can do for people.”

The powerhouse vocalist prays that his new album will help the world experience the presence of the Holy Spirit.

“I have constantly tried to create moments in music where people can experience the Holy Spirit, and the closeness of God, even if maybe they don’t know that’s what they’re feeling,” expressed Smith.

“I just want people to feel that I know the power of the feeling of the Holy Spirit whenever God is at work in your life, and He reminds you that He loves you, and He wants the best for you,” he added. “I want as many people as possible to be able to experience that feeling and that connection with Him.”

Watch the video below for Jordan Smith’s full interview on how he’s using his gift to glorify God: