Home Family & Parenting The ‘Goodbye’ That Changed Everything

It’s something I’ve heard probably a thousand times. But this time, it was different. This time the words were felt, not just heard.

They came from a little boy on Willow’s first day of preschool. That was a hard day for me. From my perspective, I had just put my small, fragile, beautiful 3 year old daughter in the middle of scary, unfamiliar place, full of judgmental children. It took everything in me to walk out of that classroom without her. Honestly, the only reason I did is because Willow wanted to stay. In fact, she was so excited she didn’t even say goodbye.

I spent the next 3 hours crying, worrying that she was being picked on. Her classmates might not know she has Down syndrome, but surely they can see Willow’s differences. She’s half their size, after all. She doesn’t talk, either. Then there’s her walking. Ugh. She’s 3, in a classroom of 3 and 4 year old’s, and she doesn’t walk. She doesn’t even crawl. She scoots. On her bottom. Surely, they’d laugh at that. How could she not stand out?

It became very clear, the minute I arrived to pick Willow up. She most definitely stood out. But it wasn’t because of her differences.

“Oh, she is such a sweetheart!”

“I just want to stick her in my pocket and take her home with me!”

Those were the comments from her teachers. I guess I expected that. But, what about her peers? What did they think? Did I dare ask?

“She just had so much fun, today! She’s right where she belongs.” One of her teachers said. I still didn’t understand, as I scooped up Willow to take her home. And then I heard it, as I walked out the door.

It came from the locker area. It was a little boy, one of Willow’s classmates. Or I guess I should say, her friend.

That little boy’s enthusiastic goodbye passed straight through my ears, down into my heart. And then I looked at Willow’s face. She was smiling. She had a good time at school. More importantly, she had made a friend. Or, I guess I should say, friends.

Willow was so excited as we pulled into the school parking lot that following week. She was grinning ear to ear.

“Willow!” I heard from the minivan next to us. It was a different boy this time. Another friend.

“Willow needs that to help her walk” I heard the little boy tell his mom. He was pointing to the fancy gold walker I was pulling out of the back of our van.

His words were just so matter of fact. They carried no emotion, no judgement. They were just a 3 year old’s observations.

Seeing all her friends standing next to their lockers, Willow quickly looked for her walker. She climbed into it and walked right up to the classroom door, eager to get started on the day. 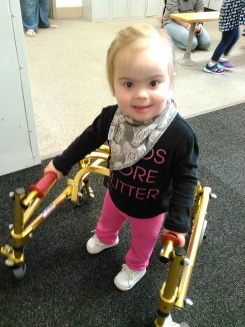 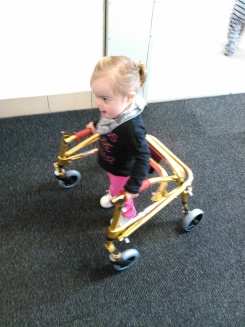 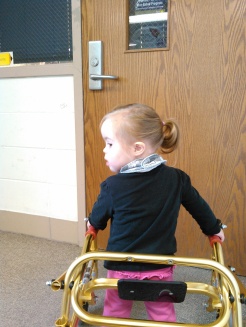 The minute the door opened, she was off. Her friends right beside her. And then it hit me. This is inclusion.

All my fears, all my emotions about sending Willow off into this world stem from my childhood, when inclusion didn’t really exist. I don’t have any memories of children with special needs in my classes growing up, because most were put in separate classrooms. I may not have seen them, but I certainly heard about them, mostly in the form of jokes. The R-word was real popular in my day, as well.

Willow’s differences don’t separate her from her classmates. They also aren’t the main reason she stands out. No, that’s her personality. She’s spunky and lovable.

Sure, her classmates notice her differences, but they aren’t afraid of them, because they’ve been given the chance to know Willow, to play with her, to become her friend. She’s their classmate, their friend, all thanks to inclusion.

That goodbye I heard on the first day of school? It would have never happened without inclusion. That goodbye is proof that the new generation, Willow’s generation, is different. Better. Beautiful.

That goodbye gave me hope. It warmed my heart. And it showed me what this world is becoming, that acceptance is growing and that love is winning.

6 Tips For Surviving a COVID-19 Summer With Your Kids