Actually, it’s the only one I watch. It isn’t my fault that I’m not as cultured as I could be – I have three children and house that hasn’t been clean for nearly six years.

I feel like I should start off by confessing that I was guilty of calling it “DownTOWN” Abbey before I actually started watching. What a classless yank I was.

Watching Downton causes me to covet all sorts of things. A simpler time. Taking leisurely strolls. Intricate hair braids and gowns with impeccable beadwork. Routine alcohol consumption throughout the day that is not only normal behavior, but expected.

Still, I do appreciate not having to wear a corset ever, and having indoor air conditioning.

As the fan favorite and critical darling British soap prepares to air its final episodes in the states, I figured I would give it a proper, middle-class send off as only an American housewife could do.

Here are a few ways I wish my life was like Downton Abbey:

1.) Breakfast in bed for the wives/mothers:

I should think it was quite obvious why this would be appealing.

Here is how I see this playing out in my head:

Mom is awoken by…nothing. The sound of silence greets her as she wakes up entirely on her own volition, and not to the screech of an alarm clock or to the sound of children’s feet, pattering about upstairs.

There is no child silently standing by her side of the bed with their hand on their hip, leaning in to to whisper though a cloud of morning breath that they cannot find their other sock.

Instead, the view is of golden sunlight, slicing through the curtains.

But wait – it gets better.

Her ladies maid (!!!) brings her a simple tray. Hot coffee with milk and sugar. Nothing extravagant to eat. Perhaps a simple bowl of Apple Jacks for while she reads the morning post, i.e. Facebook.

She enjoys her resplendent meal in complete privacy, until she is ready to dress and come down and greet the world.

This is more par for the course around here….ignore the shower curtain in the background…. 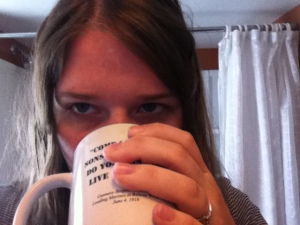 You get the idea.

It isn’t that I don’t care for driving.

It’s the million and one questions about everything WHILE I’m driving that sometimes make it a painful endeavor to the highest degree.

I don’t want to be asked repeatedly to listen to Rudolph the Red Nosed Reindeer – in March. I don’t want to report back to three people why I decided to turn left instead of right. I don’t want to facilitate handing out snacks while I should otherwise be keeping my eyes on the road, trying not to die.

Instead, I sometimes wish that I could have a chauffeur.

I could climb in the back and be expected to do nothing more than simply go along for the ride. Of course I tell myself that I would thoroughly enjoy my children’s company and the scenery, but the truth of the matter is that within six minutes of riding smoothly in the back of a car I would  totally fall asleep.

This is actually my ride around here…

My Old Faithful. Don’t worry, it only looks clean because it recently rained. You should see the inside. It looks like a Ritz Cracker factory exploded.

Perspective gives you many things in life.

For example, instead of viewing it like I would just be callously sending my children away, I’m looking at having a nanny more from this angle:  I love my children, but sometimes they drive me batty. SO, why not let someone with a plucky British accent take care of them for a few hours a day while mommy gets her Netflix on??

It would be nice to empty the dishwasher in peace instead of having to spend five minutes fishing out the graham crackers that my toddler decided to put in the utensil bin. It would be nice to go to the grocery store and actually be able to use both hands to steer the cart instead of having one hand on the baby so she doesn’t climb out of her seat.

The list of things I could do with a few hours of time to myself is endless. It’s win-win.

I actually have two amazing grandmothers. But I do NOT have a Dowager Countess. And I want one. Like right now.

In times of crises, Granny Violet is never short on ideas or scheming, but chooses her battles wisely and with care. And I can assure you, I have yet to meet someone who has a life without the occasional crisis. Forget the Avengers – Call the ultimate matriarch when trouble comes knocking.

Can’t stand that always perfect, sunshine mom at your playdate group, who makes you feel bad that you use ketchup as a base to make your beef stew? Call Granny. Have a pesky PTA parent who won’t leave you alone with their constant attempts to wrangle you into planning the next family fun night at the school? Call Granny.

She can handle any issue with aplomb before you can say “plum pudding.”

I once hired someone to clean our house. It was the first and only time I have ever done so, and I still beat myself up incessantly about it for over a week afterwards.

I felt like we should have spent $50 on something much more useful instead. I felt lazy. I felt….all of the things.

I had just had a baby, my third c-section, and getting down to scrub was not on my agenda. Totally lazy, right??

The baby isn’t a newborn anymore and instead I have three individuals yowling at me from time to time about Goldfish crackers. Which means getting down to scrub is STILL not on my agenda.

Now I realize – who WOULDN’T pay someone to clean their house for them? I mean, honestly. Which of us, if we had the means to do so, wouldn’t pay someone a reasonable sum to take care of the day to day things so that we didn’t have to?

Tell me which one of you would be upset if someone broke into your house….and folded your laundry?? I would let Donald Trump come into my house if he had a toilet brush and was insistent that he was ready to scrub my porcelain throne.

Listen, my standards are low. The other day,  I spent fifteen minutes eating jelly out of the jar with a spoon.

I clearly don’t ask for much at the end of the day. So is it asking too much for me to live on a thousand acre estate in the English countryside with a full staff on hand?

….I guess I’ll settle for Netflix and imaginary tea parties with my children

Confessions of A Working Mother

I Have Not Run Out of Time With My Children