Home Family & Parenting These Ten Boy Mom “Musts” Will Crack You Up and Make You...

This baby factory only makes boys, apparently: if you could see my uterus, it’s probably blue. And has a beard. I’m sure if you’re a boy mom, you can relate.

This fact was a little bit of a cosmic joke, because prior to birthing a domain full of dudes (four, to be exact), I was a total girl’s girl. Makeup, exfoliation, perfume, cute shoes. Fruity drinks instead of whiskey shots. Risk breaking a nail? No thank you. Bugs and worms: eww.

But being the mother of a male in other words a boy mom – whether one or many – changes you. It doesn’t mean you have to give up your girly ways (in fact, it’s probably more necessary than ever to preserve at least some of them), but parenting someone of the opposite sex can bring challenges that you’ve just got to adapt to.

So if you’re pregnant with a baby boy, or know someone who is, or have a very young boy that’s still more babyish than boyish, I’ve compiled a list of helpful prerequisites to being a boy mom. You’re welcome. 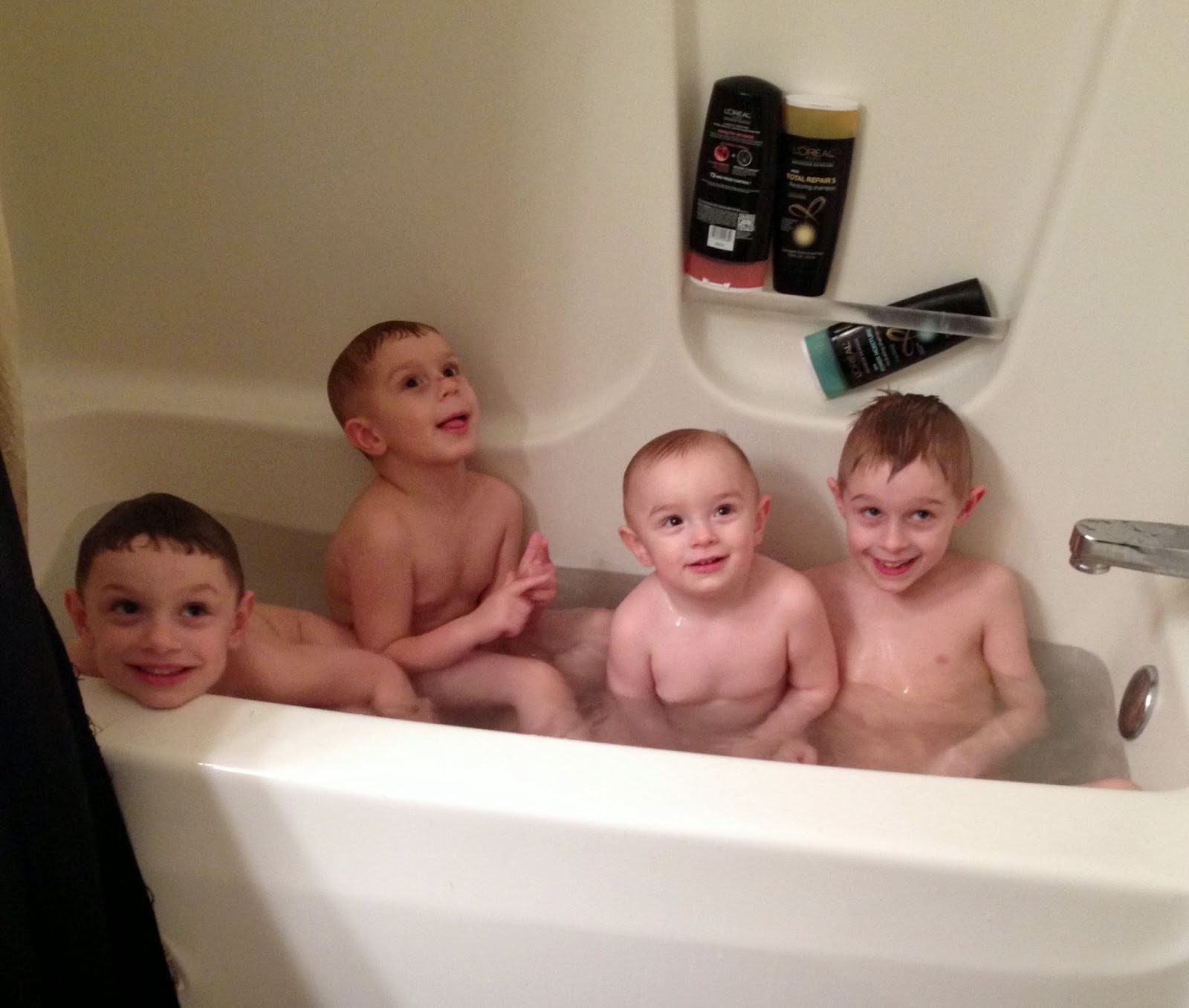 And by “bath time” I don’t mean you yourself sitting there in a candle-lit bathroom with an inflatable pillow and a tub full of luxurious rose-scented suds. I mean you must love giving baths, because boys require a lot of them. You must be prepared for drenching splashes, a wet-dog smell, a soaked floor, and tons of dirty towels. Same when they get old enough to take a shower by themselves – except then, there’s the added “bonus” of the wet-dog smell lingering after they’re done, even though the body wash is disappearing like they’re eating it. Unless you stand at the door and remind them twenty times to use soap … everywhere!

#2: You must think farts are funny. By the grace of God, I was born with this toilet-humor-loving trait, so I have had a pretty easy time dealing with this aspect. Boys think farts are funny: period. And the way you handle that can determine your stress level. If you laugh with them, you’ll all benefit. If you try to get them to stop laughing about it, it will only make things worse. Just stress that there are appropriate times and places to let one rip (i.e., not during the silent part of church or while eating at a restaurant) and you’ll be good to go. Even if you personally don’t find farts humorous (in which case I’m wondering why you’re on my blog), you have to learn to tolerate those who do. Because there’ll be a lot of that going on.

#3: You must be prepared for constant – CONSTANT – battle with the toilet. From the time I found out I was expecting my first boy, I was dead-set on one thing: teaching him to use the toilet properly. You know, putting the seat down and stuff. Common courtesy. I have always been a straight-up dictator diligent with my sons when it comes to that, because one of my fears is that they grow up to be men who don’t put the seat down. Ick. But despite my best efforts, there’s always something. One remembers to put the seat down but not to flush. One remembers to flush but doesn’t close the lid. One leaves toilet paper in weird places, like hanging out of the bowl or on the floor (WTF?). And they all sprinkle when they tinkle. I am forever reminding them to aim! Flush! Put the seat down! Close the lid! And then to add insult to injury, I have to clean it. It’s seriously exhausting to keep a clean toilet when there’s a boy (or a few) using it.

#4: You must rethink your standards of “safety.” 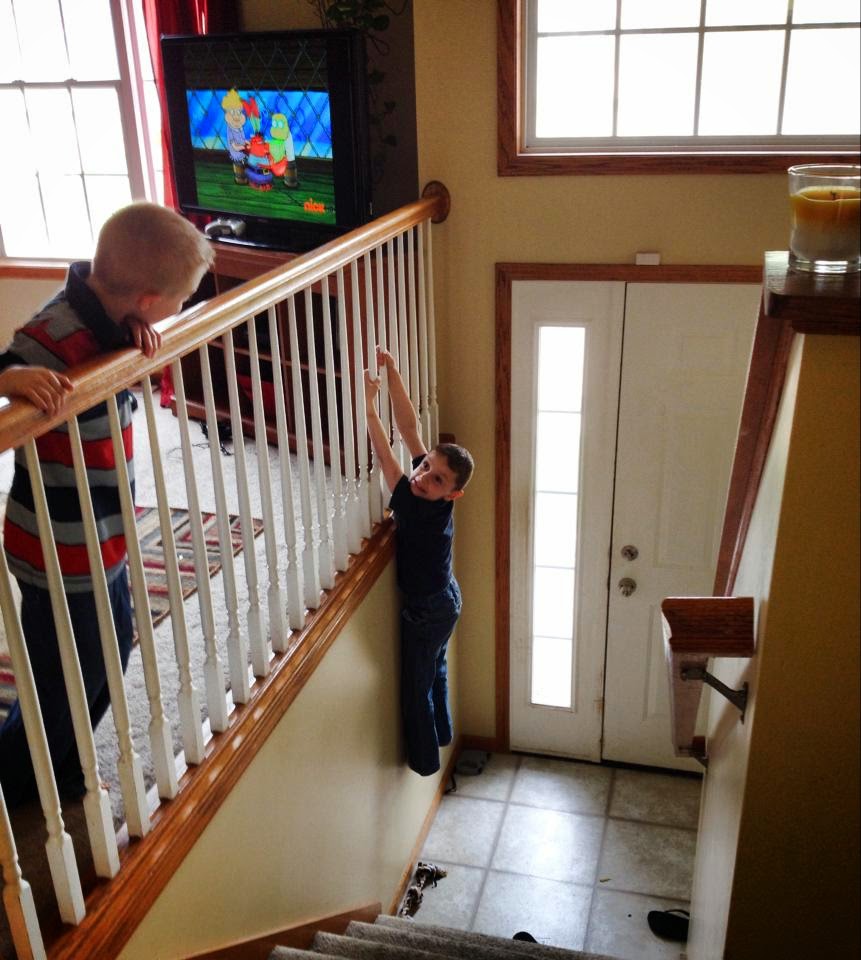 Okay, nobody call child protective services on me – I’m not talking about letting your kids ride without a car seat or letting them play with a lighter. But think about the mom you know (and we all know at least one) who sterilizes her kid’s pacifiers and bottles religiously. The mom who hovers endlessly and gasps loudly when her precious snowflake takes a teensy-weensy tumble. You know that mom? Yeah. You can’t be that mom when you have a boy, because boys are just rough. They jump off of things and slide down things and climb up things and roll and tumble and tackle and leap and pounce and run. ALL THE TIME. They taste dirt and kitty litter and glue and hardened gum from beneath park benches and restaurant tables just out of curiosity (I mean, one of my boys ate candy that had been peed on). They try to ride their bikes, scooters, and skateboards faster than everyone else … and try to out-jump everyone else on trampolines. And if you’ve got multiple boys? Fuhgeddaboutit. They do all that plus wrestle, and occasionally get into full-blown knock-down drag-out fights.

Just stock up on Band-Aids and look the other way for a little bit. For your own sanity.

#5: You must not be surprised at drama if you’re a boy mom. I wish I had a dollar for every time someone told me, “Oh, you’re so lucky – boys are way less dramatic than girls.” … Really? Because my boys are as dramatic as they come. There is plenty of stomping, eye rolling, sobbing, shouting, door slamming, and general sassiness going on around this piece. I don’t know why everybody thinks boys are naturally easy-going, respectful, agreeable creatures. It must be because my sons’ dramatic outbursts are over “legit” things … like me not letting them use my good earphones, or getting relegated to “Player 2” on the XBox. Right? Recently, my eight-year-old “hated this house and all his brothers” after a burping contest escalated. And after tripping over his shoelace, my Kindergartner flattened himself out on the floor and wailed, complete with tears, “This world is too dangerous for someone like meeeeeee!”

Don’t ever let someone tell you that you’re lucky because boys aren’t dramatic. Seriously. They have no idea.

#6: You must be prepared for messes if you’re a boy mom. 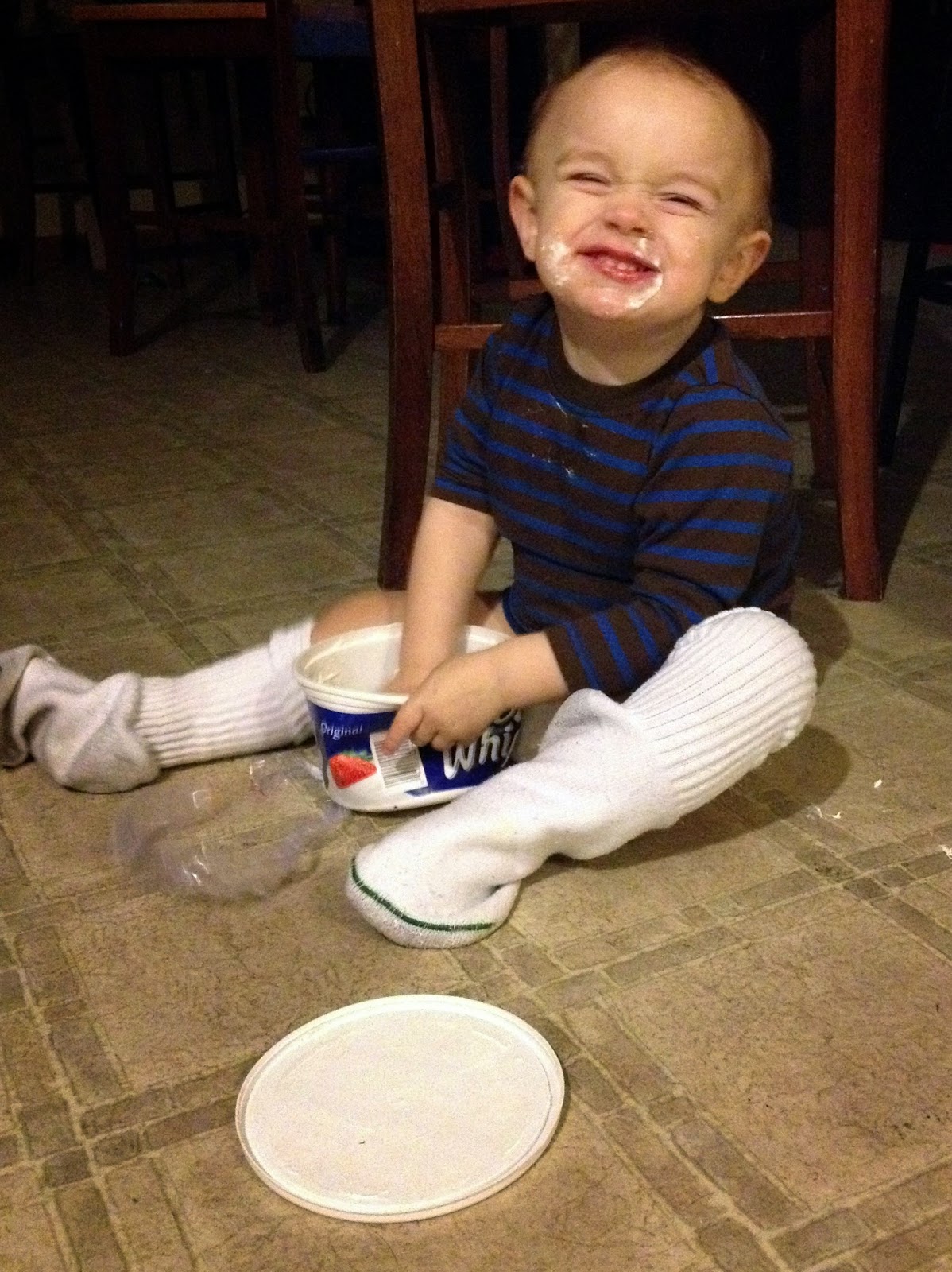 Sometimes I go slightly insane at the condition of my house. But unless you can afford to hire a full-time housekeeper, messes are just something you’ll have to deal with. And I’m not talking about just clutter from toys. No matter how often you yell and threaten tell them, boys are just not that conscientious about tracking in mud, or grass clippings, or getting toothpaste all over the place, or spilling milk and then maaaaybe half-assed wiping it up with, say, the corner of the tablecloth. (And the boys’ toilet? See #3.) Boys will also wipe boogers on walls and carpets and slop food all over the place like pigs at a trough. This isn’t due to lack of coaching; trust me, I feel like I spend 75% of my waking moments preaching about keeping things neat and tidy. (I spend the other 25% cleaning up the messes that result when my preaching goes in one ear and out the other.) All of this intensifies with multiple boys and/or a visit from multiple friends. Which brings us to the next prerequisite of being a boy mom …

#7: You must have a lot of food on hand at all times. I was so fooled by this one. Because when your kids are really little they eat virtually nothing, and you think, “I sure am glad my kids aren’t big eaters!” And then they get to this stage where – holy crap – did he just inhale those scrambled eggs? My tiny, twiglike eight-year-old will annihilate a man-sized portion of breakfast and complain that he’s still hungry. And they always. Want. To snack. My refrigerator opens every five minutes when the kids are home. (And in between those five-minute spans, they’re raiding the cabinets.) We spend enough at the grocery store every month to make me feel faint in the checkout line, and we still run out. These little eating machines are like a pack of hungry locusts – and when one has something, they ALL want their own. I can’t wait until they’re all teenagers!*

*Note the sarcasm. I can totally wait. I need time to find a few more jobs and take out a second mortgage so we can almost afford the grocery bill.

#8: You must be prepared to go through LOTS. And LOTS. Of JEANS. I have written several blog posts about this very subject because seriously? Four boys later and I am still utterly astonished at how fast they can ruin a seemingly-sturdy pair. Denim is supposed to be this rugged fabric, and it may work for lumberjacks, but it’s no match for the crawling, scraping, staining, and scooting of little boys. I find this ironic, though, because …

#9: You must be cool with nudity when you’re a boy mom. 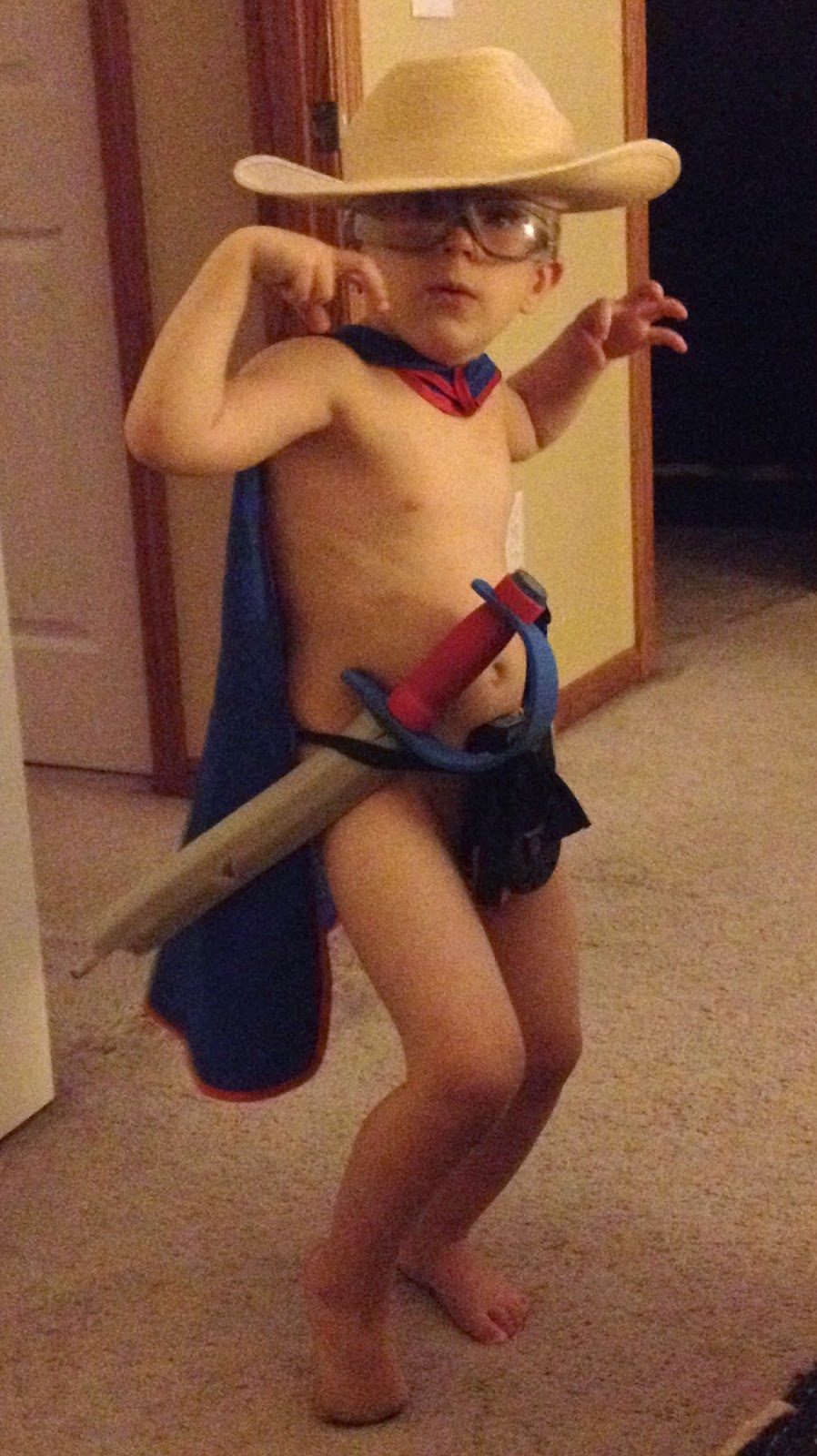 I don’t know how my boys go through so many pairs of jeans because, hell, it isn’t like they wear them at home. In fact, it isn’t like they wear anything at home. In my experience, from the time they are physically able to remove their own clothing, they will. My boys start stripping down the instant they get home from school. Sometimes they lounge around in their underwear, and sometimes they forego the underwear altogether. Which brings us to my very last piece of advice …

#10: When you’re a boy mom…you must get used to “The Grab.” I’m talking about the penis. The wiener. The tallywhacker. The wee-wee, the pee-pee, the goods, whatever term you use. They are going to grab it every chance they get (see #9 for an approximate estimation of just how many chances they get). Your adorable infant son will reach down to grab his as soon as you take his diaper off, and in my nine years of experience mothering boys, it doesn’t stop after that. They’ll pull on it, stretch it, flick it, anywhere, any time they can get access to it. They’ll do it in the bathtub and while watching TV. I have literally been forced to utter the phrase “Stop wrapping your penis around your fork.” They do it in a way someone might, say, bite their nails or twiddle their thumbs: automatically, absentmindedly, innocently, frequently. After a while, you won’t even notice.

… You’ll probably be too busy cleaning up messes or shopping for new jeans.

The Best Way to Practice Self Care is to Care Less