Home Family & Parenting This is What I Wish You Would Do When My Special Needs...

I am the mother of that child who is far too old to be “behaving” like that.

I am the mother of that child no one wants to play with, who no one invites anywhere, who no one offers to sit with…

I know it’s hard not to stare. I do. I also know you don’t mean to stare. Maybe it’s like watching a social experiment or something.

Mother and three sons enter store. One son starts screaming as soon as he spots people. The middle son takes the baby son and pushes the buggy away, clearly embarrassed. The mother doesn’t scold screaming son, oh no, she does not. You wonder why. You go through all the things you would do while staring at the unfolding  scene.

Mother bends down to son and starts gently rocking him. You think he might have autism. Mother gets kicked in her stomach. She falls. Son starts crying, trying to punch her while she tells him over and over, “It’s OK.” By now there are a good few in the audience, so you don’t feel uncomfortable. You think maybe he’s “bold” or spoiled. Now he’s screaming, “I kick you. FUG OFF,” while banging his fists together. You stare, mouth open.

Her other sons are by the door, one in a buggy and the other asking, “Are you OK, Mom?” There are tears in his eyes. The mother smiles, she actually smiles! She tells her son to stay right there like a good boy.

Mother looks back at the “bold” boy who is now a little calmer. He’s still kicking her but asking for sweets! She gives him sweets! Well, that caused you to have a chat with the stranger beside you who also can’t believe the mother didn’t march that “brat” right out of the store.

Mother sits down and laughs with said boy as they both eat a sweet. She nods for her other two boys to join them, which they do. You can’t believe what you’re seeing. And you’re still staring.

I do know that scene would be hard to ignore. It would stop me in my tracks, too.

Here’s something anyone could do if a scene like that should unfold. Ask the other children if they’re OK. My middle guy gets so embarrassed and hates the crowds watching and whispering. He’s asked me, “Mom, why don’t they ever help? Why do they just stare and whisper?”

I’ve told him, “They just don’t know what to do. They don’t know Ethan (my son) or us, so they’re afraid to help.”

To stare or not to stare… It’s simple, really: don’t.

Don’t stare. You’re sending such bad messages to not only my children but to your children and other children watching your reaction.

If you’re too afraid to offer help, keep on walking. I beg you. But if you want to help, go see if my other boys are OK. Stay with them until I have Ethan calm. Or if I’m alone while he’s having a meltdown, maybe have a look around and move objects that may harm him, me or even you if he’s lashing out. Or if I had to drop bags to run after him, maybe you could pick up the bags.

I wish someone would ask me, “Can I help you?” I’ve never been asked that and I do know why, but once in a while, I would love someone to ask me that instead of pointing and staring.

I am the mother of that child you’re staring at. 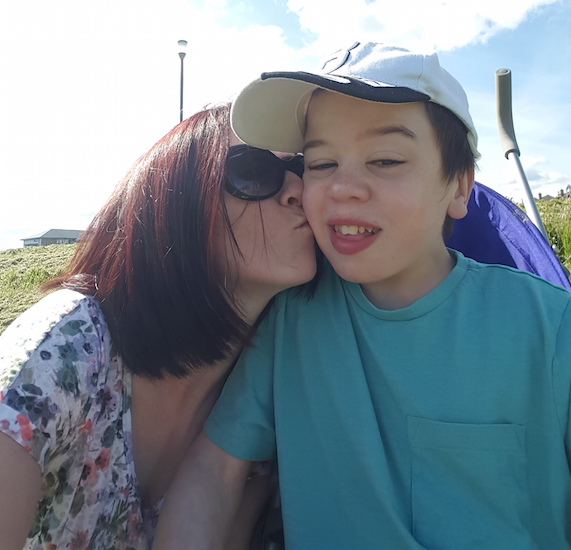