Nearly 40 children are now safe after a major sex trafficking bust in Georgia that included the arrest of 9 suspects.

With the help of other agencies, U.S. Marshals Fugitive Hunters spent two weeks searching for the missing children in central and northern Georgia.

During the extensive search, children were found in Fulton, Forsyth, Clayton, and Gwinnett counties, among several others.

The Service Director of U.S. Marshals, Donald Washington, feared that the kids they found were all “already or potential victims” of human trafficking and exploitation.

“These missing children were considered to be some of the most at-risk and challenging recovery cases in the area, based on indications of high-risk factors such as victimization of child sex trafficking, child exploitation, sexual abuse, physical abuse, and medical or mental health conditions,” authorities explained. “Other children were located at the request of law enforcement to ensure their wellbeing.”

Thankfully, the nine suspects are currently being detained behind bars, as prosecutors begin to tackle the cases and healthcare and social workers tend to over three dozen traumatized children.

“One missing child is worth thousands, in my mind, of fugitives that we go out and get,” said Washington.

Governor Brian P. Kemp praised the efforts of the authorities and special investigation teams responsible for the huge rescue.

“@GAFirstLady and I applaud the work of law enforcement in “Operation Not Forgotten,” Kemp tweeted. “We’ll continue to work around the clock to bring an end to human trafficking and ensure the perpetrators of this evil industry know they have no place in our state.” 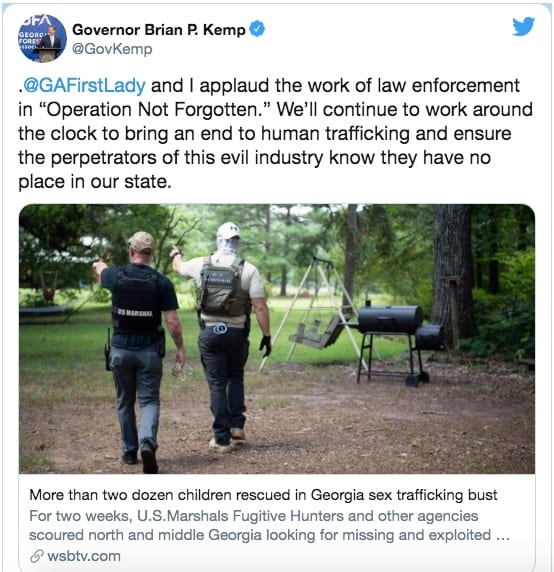 According to Attorney General Chris Carr, authorities will measure their success on “how many lives that we have saved and that will have a new and fresh start.”

Many cities across the United States have similar sex trafficking operations ongoing, but thus far, few have been completed.

Sis, You Won’t Find Happiness in a Calendar Date