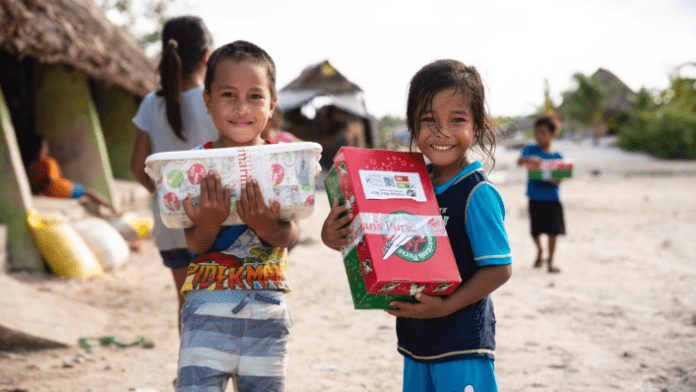 The Freedom From Religion Foundation, which advocates for atheists, agnostics, and non-theists, has persuaded a Kansas school district to discontinue their participation in Samaritan’s Purse’s ‘Operation Christmas Child’ because of the program’s strong Christian beliefs.

According to The Freedom From Religion Foundation’s website, after a school’s staff member reached out to the atheistic watchdog organization, they filed a complaint with the school’s Superintendent Tony Helfrich.

The complaint stated that the staff member reported multiple “egregious constitutional violations” that have occurred at Liberty Middle School in Pratt, Kansas. The Freedom From Religion Foundation’s attorney, Christopher Line, cited that “Vice Principal Ron Hill has been using his position to promote and endorse his personal religious beliefs to students.”

“Our complainant reports that on See You at the Pole Day, Mr. Hill announced the event over the intercom, personally invited students to the event, and then led students in prayer. We understand that Mr. Hill also includes religious messages and bible quotes in his official District communications, and that recently during morning announcements he said, “we need to remember to give all the glory to God, whether others agree with it or not, and I don’t care if I offend anyone by saying that.” We understand that bible verses or references to God and Jesus are often included in the morning announcements. Mr. Hill has also reportedly played Christian music during class and made religious statements to students, including telling a group of students that ‘God is sad when you don’t tuck in your shirts. You are disrespecting God.’”

“We write to ensure that the District takes immediate action to cease promoting and endorsing Christianity in its schools,” the complaint states. It claims that Principal Ryan Creadick directed Liberty Middle School’s staff to participate in Samaritan’s Purse’s ‘shoebox ministry,’ and that “the district must ensure that it’s staff members, Vice Principal Hill, and Principal Creadick will no longer promote or endorse religion to students.”

Attorney Line also said to the district that staff must be instructed that they cannot participate in, promote, or endorse religious events such as “See You at the Pole,” playing Christian music while students are present during school hours, and making religious comments to students (referring to Vice Principal Hill’s Bible quotes and announcements).

Superintendent Helfrich responded to Attorney Line’s complaint letter saying, “Regarding our students’ participation in the “Operation Christmas Child,” we are discontinuing that effort upon learning that its mission is more sectarian in nature than we realized.”

The Freedom From Religion Foundation said the “complaint proved to be a teachable moment for the school district” and that they were “pleased it was able to educate the school district about the true purpose of Samaritan’s Purse.”

This isn’t the first time that Samaritan’s Purse has been under attack for its religious affiliation and outspoken biblical stances and convictions. Earlier this year, Samaritan’s Purse set up an emergency field hospital in New York City during April’s peak COVID-19 outbreak. The Christian organization was blasted in an article by the Gothamist that referred to Samaritan’s Purse’s leader Franklin Graham as a “virulently anti-LGBTQ and Islamaphobic preacher” (due to his faith).

New York City council speaker Corey Johnson tweeted at the time “This is very disturbing. We need reassurances from the city and from Mt. Sinai that Samaritan’s Purse and its volunteers will be monitored, and that the LGBTQ community will not be discriminated against in any way. This is a crisis, but our values remain.”

Previous articleWhen You Have Teenagers, You Still Need the Village
Next articleBefore I Had You, I Didn’t Know