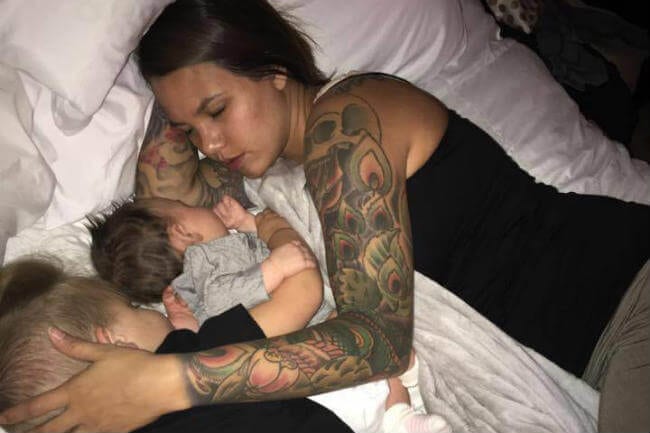 Co-sleeping is a must in some “parenting styles,” but for some parents it’s a must just to make it through the hazy days of parenting a teeny baby. It’s not for everyone, and it should be done safely, but regardless of how you feel about it personally, the truth is that co-sleeping is usually more about baby wanting to be near MAMA than anyone or anything else.

Dad David Brinkley recently took to Facebook to combat opposition to co-sleeping from an unlikely source: dads who don’t like their wife-time being taken up by sleeping kiddos in the bed. Citing a recent phone conversation where he heard his wife’s friend telling her that her husband “would never let me do that” and would “hate that” in regards to co-sleeping, Brinkley decided to let other dads know exactly how HE feels about his wife co-sleeping with their kids—and his powerful words just might make you cry!

Brinkley sets the scene by saying:

“My wife is a best friend kind of woman. She has hours upon hours of long conversations with her friends ALL the time and occasionally I get to hear little pieces. Recently she was talking to a friend and they were talking about this thing called “co-sleeping” and I heard the other person ask ‘doesn’t your husband hate that? My husband would never let me do that.'”

He says the conversation left him unsettled, so he decided to speak out. He goes on, “This blew my mind and has bothered me for days. So I just decided to come out as a man and set a few things straight. I do NOT hate any part of what makes my wife the mother that she is. I would NEVER degrade or disregard anything that she feels like doing for my children.

Do I have to squeeze into a small corner of the bed sometimes? Yeah? But my God how beautiful does she look holding my children? Making them feel loved and safe? The thing is that our wives only experience these little seasons in motherhood for a short time. They carry our babies, they birth them, they nurture them and maybe while they are little they let them crawl into our beds and snuggle.”

(Yeah, THAT’s where I had to get my tissues out!!)

Brinkley goes on to say that there’s an even more time-sensitive reason he won’t deny his wife or kids the co-sleeping experience,  because “eventually our babies get bigger they grow up they get “too cool” for snuggles so why would we as men want to steal a single second of this time from them? Being mothers is part of their identity and what’s a year or 3 out of decades of life spent together? I just want to say that I am proud of the decisions my wife makes as a mom and I support every single one of them. I would never want to rob her of this time she has or these seasons that are in reality too short to not enjoy. Please respect your wives as mothers.”

I don’t know about you, but I LOVED hearing this affirmation of motherhood from a loving husband and dad. He truly GETS it—that once you become a mom, it’s a part of your identity you can’t tear away. And yes, that part of your identity gets less intense with time, so why not jump in and indulge it while they’re little? You’ve only got one chance, after all.

Thanks, David, for your sweet words. They definitely inspired my mom-heart…especially since my 6-year-old still sneaks into my bed every night!

Previous articleDear Other Parents of Children With Special Needs: This Is Why I Don’t Know What to Say to You
Next article‘Choose Her’ — Blogger Writes Powerful Letter About What Mothers Really Want from Their Husbands