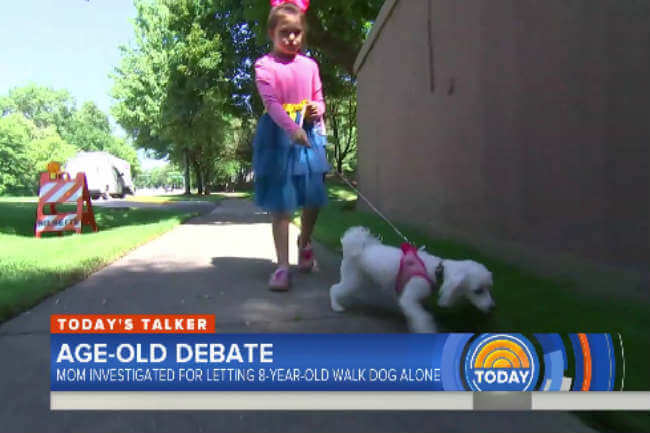 Give Me a BREAK: Mom Investigated for Letting 8-Year-Old Walk Dog Alone

It’s Monday, and I’m fired up. Like, I’m more than a LITTLE hot around the collar, mamas. You know why? Mom shaming. Mom judgment. Everyone knowing how to parent our kids better than we do. I’m SO tired of living in a society where moms. can’t. win. EVER.

So, what’s started my Monday rant? I’ll tell you. This morning I opened up the Internetz on my laptop to be greeted with this story on TODAY.com: “Mom gets called by social services after 8-year-old child walked dog alone.” Yes, that’s right. A suburban mom got social services called on her for letting her eight-and-a-half-year-old walk the dog around the block for five minutes in her suburban neighborhood. But, it gets better! The headline only tells half the story. Before the nosy neightbor called social services, she called the POLICE. This mom had the cops knocking at her door first, and then, when she thought her ordeal was over, social services came knocking two days later.

This is more than just mom shaming. This borders on harassment, in my opinion.

Corey Wilden, a 48-year-old mom of two from Wilmette, Illinois, explained what happened in an interview with the TODAY show. She had asked her daughter to walk the dog—a great way to teach a child responsibility—and then, she got the shock of her life.

“She was gone for about five minutes and the next thing I know the police were at the door,” Widen told Kristen Dahlgren on TODAY.

The police found nothing to pursue. The “concerned neighbor” that called had reported that a five-year-old was out alone, not an eight-year-old. Wilden thought the issue was closed, so she was surprised and more than irritated when social services came calling two days later—because the same neighbor had felt the need to call them as well.

Social services also found no wrongdoing, but told NBC Chicago that they have to investigate every call. Nothing like a little mom shaming to waste taxpayer money and social services’ valuable time. So unnecessary!

Wilden’s story has raised the oft-discussed topic of “what age is appropriate to leave a child alone?” That, of course, depends on the situation. But I’d say an eight-year-old walking a dog on a leash on her own street in a safe suburban neighborhood is probably a-ok, and that her mom is probably trying to give her some responsibility so that she can be a great adult one day. It seems an easy assumption for me to make, so why did Wilden’s neighbor make the complete opposite assumption?

The TODAY Show also interviewed Anne Marie Albano, a professor of clinical psychology at Columbia University, on the topic of what age kids can spend small amounts of time unsupervised. She seems to be with Wilden on this one, saying, “The main thing that we have to bear in mind is that we are training our kids from early on to be independent adults. Picking out their own clothes by age 4, walking the dog by age 8 or 9, these are appropriate things for them to do in a safe place around your home or neighborhood.”

I couldn’t agree more! I live on a very busy main street, so if I had a dog, I might wait a little longer to let my kids walk it, but the decision would be based on their maturity and safety acumen as well as age. If I lived in a low-traffic suburban neighborhood like the one I grew up in, age eight would be totally appropriate for dog walking. The bottom line is, parents know what their children can handle, and a child walking a dog leisurely around the block, clearly not in distress, is not something to waste your breath and lots of peoples time reporting to the authorities.

The laws about leaving children unsupervised vary from state to state, but just this past April, Utah passed a “free range parenting” law which prevent parents from being prosecuted for letting their kids roam and play away from home.

They had to pass a law for that?? That’s what we did alllll day, every summer and weekend when I was a kid! Roam around the neighborhood and come home when we were hungry! It’s called “playing.” Yeee-ikes.

Look, I realize that there are an unfortunate number of crappy parents in the world, and I do believe if you see obvious neglect, that you should say something.  However, if you think mom shaming and imposing your parenting opinions on another mom who simply parents differently than you do is helpful, you are very, very wrong.

Let’s all stop the mom shaming and support each other! Just because someone parents differently than you doesn’t mean they are endangering their child—or that they’re even wrong. God made you to be your kids’ mom, and me to be mine. So let’s do the very best we can at knocking that gig out of the park, and at building others up to do so as well!

Previous articleMama, You Need Rest, Too
Next articleBack to School: Mastering the Art of a Personal Pep Rally