3 Godly Ways to Resolve Arguments With Your Husband

We argued the entire car ride. It was such a silly argument that I don’t even remember what it was about but I do remember how I felt.

I was SO mad–not the kind of mad where you give a little stink eye and get over it two seconds later. I’m talking about the kind of mad that makes you want to pull the car over and walk the rest of the way.

We were on our way to small group (of all places) but the feelings of bitter resentment between us made me not want to go. I remember thinking to myself, “What is wrong with us?! How can we even claim to be a Godly couple? This is so stupid.”

Isn’t that crazy? It’s like tossing gasoline on a fire.

I’m sure you know what I’m talking about. I’m sure you’ve been a little irritated when he forgot to pick up his underwear off the floor, which then frustrated you and led you to make a snarky comment under your breath, which of course he heard and challenged, which then unfolded into a complex lovely little origami design that no one really understands, otherwise known as an argument.

You don’t start off really angry–just frustrated. But the frustration builds and then suddenly you’re angry and then you get angrier at the fact that you’re angry.

And maybe you’re left asking the same question I find myself asking,

“WHAT IS WRONG WITH US?”

So, what do we do in situations like this? How do we bring it back to earth when our emotions make us want to either explode or shut down instead of handle said situations with dignity and strength?

It can be difficult to be kind and calm when our emotions are involved. But instead of shutting down or exploding, it may be better to take positive action that brings God right into the angry moments and help shut down the enemy’s schemes to divide and destroy.

The last time my husband and I got in an argument, I noticed my blood starting to boil. After a few minutes, I noticed my Bible was in my purse, near my feet. As we drove on in awkward silence, I thought about opening it and just reading 1 Corinthians 13:4-8 out loud. I brushed off the thought for a few minutes until I couldn’t resist Holy Spirit’s stubborn nudges anymore.

So, I tried it. I began to just read the Word in the midst of a moment that didn’t feel so Godly. I had barely read three verses when I felt the mood lighten and the atmosphere shift. He looked over at me, cracked a half smile, and took my hand.

By the time I finished the passage, we were able to calmly and rationally solve the problem.

I know it may feel unnatural to read the Bible when you’re angry but God is a living God–He’s not confined to quiet time or when you’ve got it all together. You’ve gotta rely on His Word when you come unraveled. It’s alive and active, sharper than any two edge sword. It can tear any wall the enemy tries to build between you.

It’ll likely be awkward and uncomfortable at first. Do it, anyway.

2. Say What You Love About Your Husband Out Loud

I don’t know about you but when I’m angry or upset with my husband, I’m not thinking about his great qualities. Instead, I’m magnifying his flaws. Sometimes I catch myself thinking about everything that I see wrong with him, instead of just the one thing that initially frustrated me.

If I let my anger fester, I don’t only focus on the fact that I don’t agree with his point of view and/or can’t understand where he’s coming from, but I tend to start thinking about all the things he’s done wrong before and all the little flaws I want to “fix.”

When I do that, I no longer see him as a whole person nor as a son of God. In my heart, I strip him of his true identity and my emotions begin to cloud my vision of who he really is.

This can be dangerous if it’s not addressed intentionally. One thing I’m learning to do is SPEAK or WRITE out the things I love about him and the gifts God has given him…while I’m still angry.

For example, if I share with him how I feel about a certain issue and he disagrees or defends himself, I immediately feel myself getting angry. I mean, what wife doesn’t want her husband to understand her?

Sometimes it turns into a little back and forth argument which can end one of two ways: awkward silence or intentional affirmation.

Even if I don’t agree with my husband, I can choose to affirm the qualities I know he has. For example, if I shared with my husband that I feel like he needs to help around the house more and he responded with the argument that he works full time and doesn’t have time, that would hurt me. I may even say, “Hey, I work, too, but I pull my weight.”

Then, he may get defensive and my mind might start going. I would likely begin thinking about all the times I had to pick up after him, jumping to the conclusion that he’s just lazy. Suddenly, all I see is laziness when I look at him–even if he’s not really lazy at all. Maybe he had a few moments of forgetfulness but those moments don’t shift his whole identity to be a lazy person–and I have to remind myself of that.

When I notice that happening, I have to vocalize affirmations in order to shut out the enemy’s lies.

I may say something like, “I know that you a are mature and responsible man. I know that you are a strong man of God and a good husband. I’m frustrated with a few recent situations but I know that’s not who you are and I only share my feelings with you because I know what you’re capable of and can do better.”

This helps brings down his defense shields and also calms my heart and reminds me to see him as a whole, instead of hyper focusing on his mistakes. Try it next time!

This is a new one I’m trying and it’s something you have to be careful with so as not to seem as though you’re ignoring your husband or mocking him in the middle of an argument.

Recently, Matt and I were in a heated argument and I could feel myself about to say something I’d really regret. So, I just folded my hands and covered my mouth and started praying instead of saying what I really wanted to say.

While it was done with good intentions, my husband thought I was trying to make a statement with it and it upset him.

I’ve now learned that when we can’t come to an agreement or the argument is getting really heated, it’s best to invite him to pray WITH me. It’s far more effective to take his hand and say, “Okay, okay, okay, hang on. This is going nowhere can we just pray and calm down? Then we can talk again,” then to just start praying alone.

When you share with him what you’re about to do as well as invite him to join you, it shows him respect and allows both of you surrender to God instead of trying to get the other to surrender to you.

Turning to prayer allows us to channel all the ugly words we may have said into loving and intentional words of prayer. Doing this will help you take a break, avoid letting your emotions take over the argument, get your priorities back in line, and finish the discussion in a more peaceful, humble, and Godly manner.

Like you, it breaks my heart when my husband and I argue. I hate being at odds with him. I hate feeling like we aren’t as happy as we should be because that makes me believe the lie that we aren’t as Godly as we should be. I feel like we don’t measure up to all the other seemingly perfect, Godly couples I see on the internet or at church.

So, breathe. And try out one of these ideas the next time you find yourself at odds with your husband. Because this isn’t about perfection but unity.

Remember, the enemy seeks to plot, steal, and kill (John 10:10). Take this seriously: the enemy WANTS to destroy your marriage. Giving your husband the silent treatment or screaming at him gives the enemy the power he’s dying to have in your marriage.

Don’t overlook little arguments but understand that they are part of the enemy’s schemes to divide and destroy a good, Godly thing. Identify them. Call them out for what they are. Don’t brush it under the rug. Take Godly action even when it’s hard.

Because your marriage is not so much a mural as it is a mosaic. Every piece you add–good or bad–counts. So, build it beautiful.

Click the image below to download this lock screen as a daily reminder to build it beautiful! 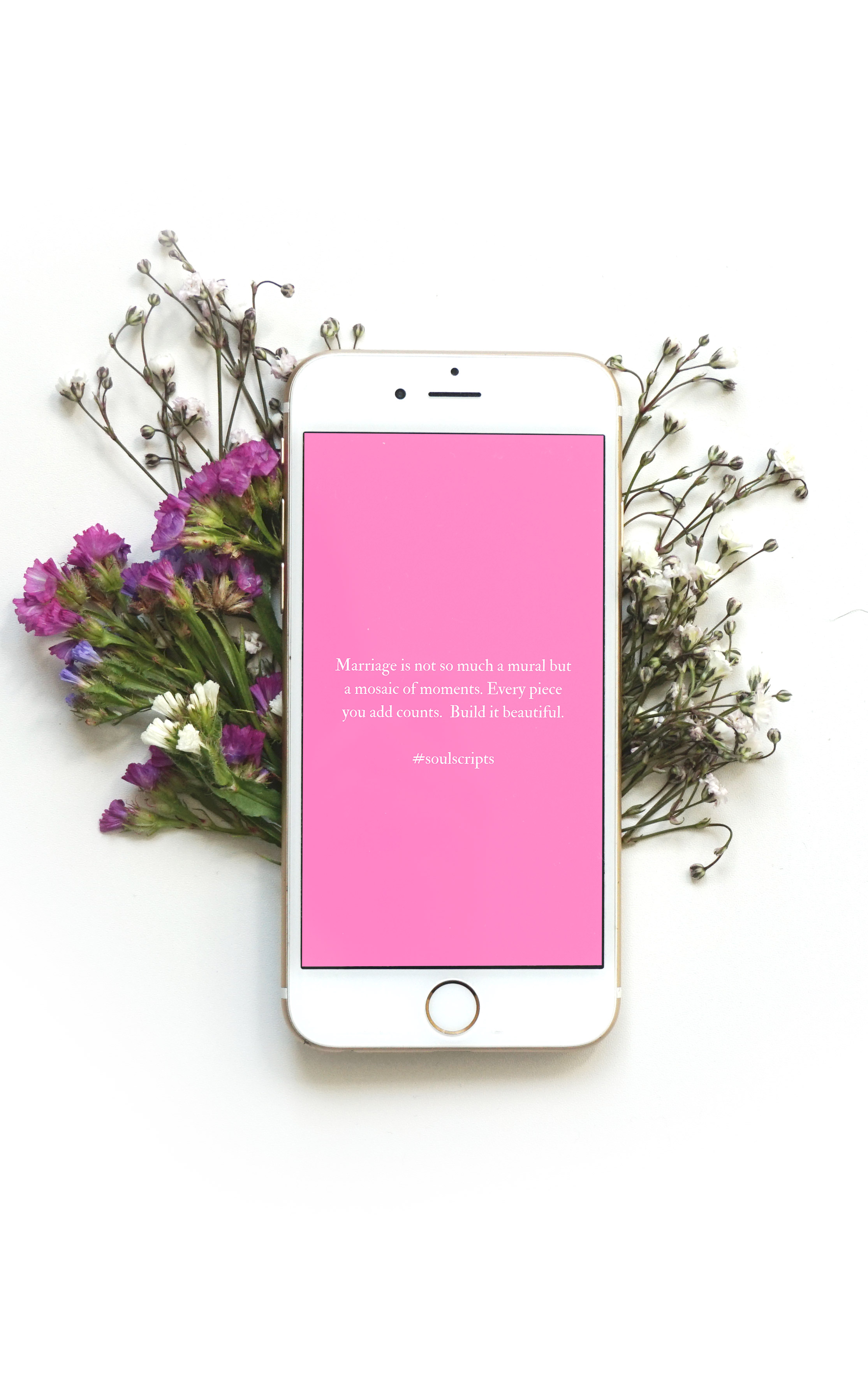 This article originally appeared at blog.thesoulscripts.com, published with permission.

Jordan Lee Dooleyhttp://soulscripts.com
Jordan Lee is the creative voice behind the blog, The SoulScripts. She is passionate about seeing women set free by the love of Christ and works to bring them to that through sharing real, raw, and relatable stories and anecdotes with a creative spin. She launched her site in 2015 on a simple premise — to get real, to sort through the lies women believe, and to encourage readers in Truth while offering touches of comic relief along the way. She especially loves to keep it real by speaking openly into real-life struggles and offer encouragement through storytelling because she believes that our stories are the most unifying thing we have. The messy, broken, and imperfect parts of life are the threads that weave us together, reminding us that we are truly not alone. She understands the reality that we all have imperfections, brokenness, and pieces of our lives we’d rather not show. She recently published her first book, WholeheARTed: A Coloring Book Devotional, released this past spring. It is available for purchase via Amazon, Barnes and Noble, Lifeway, and more. When she isn’t writing, you can find her with a coffee in hand as she dives into the Word, jogging through town, and traveling the globe with her husband. You can get to know her more on Facebook, Twitter,or Instagram.