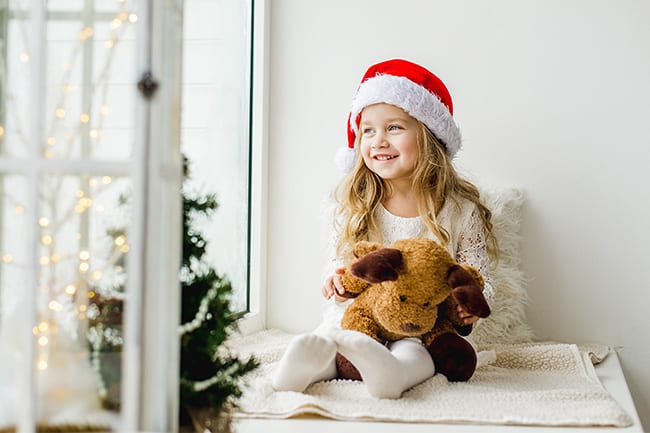 The Case for Keeping Santa Claus in Christmas

Santa Claus and Jesus seem to be in a perpetual competition for the Christmas spotlight. When you ask a child who Christmas is about you, never know which of the two contenders will win the battle.

As Christian parents, we worry because our children often seem to be more focused on Santa Claus than they are on Jesus. We worry because they seem more interested in what toys they are going to get than on the spiritual significance of what we are celebrating. We worry that Christmas has been taken over by consumerism, and we wonder if Santa Claus is the culprit. While I agree that it is important to vigilantly resist the pull of consumerism that certainly threatens to hijack the holiday, I’d like to take a minute to advocate on behalf of Jolly Old Saint Nick.

Before we completely throw him under the bus, let’s consider what Santa Claus brings to the Christmas table.

The month of December is a time of joyful anticipation for children because they believe that on the night of the 24th this jolly old elf is going to slide down their chimneys and leave them all sorts of good things. The weeks before Christmas are filled with excited conversation about what Santa is going to bring, who is going to sneak into the living room to see him, and whether he’ll eat the cookies and give Rudolf the carrots. The anticipation, the hope, is almost as magical as the event itself. There are few things in life as powerful as hope—the joyful anticipation of something wonderful that is going to happen very soon transforms our present reality.

Santa Claus exists in a world of wonder. How in the world does he get down the chimney? And how does he get back up? There is so much we don’t know about Santa Claus, and we are left to ask and ponder and wonder. Children can talk for hours, imagining a million different scenarios to explain how he gets to all of the children in the world on that one night, how he carries all of those toys, and how in the world a bunch of reindeer can make a sleigh fly! The mystery of Santa Claus fills a child’s imaginations with mystery and awe and wonder.

If there is one thing we know about Santa Claus it is that he brings good gifts to children. And while popular Christmas songs might lead us to believe otherwise, Santa Claus does not distinguish between “naughty” and “nice” children. When the relatives gather on Christmas Day, the question to children is never “did you make the cut?” Rather, the question is “what did Santa bring?” The children actually do nothing to earn these gifts. They may write letters. They may be “extra good.” But the reason for the gifts is the character of Santa himself—he is a giver of good gifts. On Christmas morning, children are simply invited to receive and celebrate.

The writer of Hebrews defines faith as “confidence in what we hope for and assurance about what we do not see.” When children believe in Santa Claus they understand what it means to believe in something, in someone, they can’t see. They don’t see Santa Claus come down their chimneys and leave gifts around the tree, but they believe because the story is compelling and the evidence is strong. As they get older and wiser, many children suspend their growing disbelief so that they can continue to enjoy the fantasy. Even adults enter into the world of Santa Claus, believing and rejoicing along with the children. While our cynical sides may feel troubled by all of this make-believe nonsense, many have argued that imagination, fairy tales, and fantasy are an important, if not vital, component of human life.

Albert Einstein is quoted as saying, “When I examine myself and my methods of thought, I come to the conclusion that the gift of fantasy has meant more to me than any talent for abstract, positive thinking.”

G.K. Chesterton explained, “Exactly what the fairy tale does is this: it accustoms [the child] for a series of clear pictures to the idea that … there is something in the universe more mystical than darkness, and stronger than strong fear.”

And J.R.R. Tolkien said this: “Fantasy remains a human right: we make in our measure and in our derivative mode, because we are made: and not only made, but made in the image and likeness of a Maker.”

Even as we revel in the fun, we still worry. What will happen when a child learns “the truth” about Santa Claus? We worry that their hopes and dreams will be dashed. We even worry that they may lose faith in God and other important things unseen. But perhaps “the truth” a child must learn is not that Santa Claus “isn’t real.” Perhaps the truth is that Santa Claus is very real, but instead of a physical person he is a beautiful metaphor that illustrates the power of hope, wonder, grace, and faith.

When Santa Claus takes his place on the shelf next to the millions of other myths enjoyed by children across the globe throughout history, the true Christmas story remains. The story about the God of the universe becoming a baby in a manger does not become less true as we age. On the contrary, this story becomes more true and real and powerful with each passing year. Through Santa Claus we see divine truth through a glass, darkly. Through Jesus, we see divine truth face-to-face.

This piece originally appeared at mosaicsite.org, published with permission.

Previous articleYour Holiday To-Don’t List: Finding Your Balance During the Holiday Season
Next articleLittle Girl in Missouri Receives the Best Gift — A New Liver and a New Kidney

Amy Bost Henegarhttp://mosaicsite.com
Amy Bost Henegar is a minister for the Manhattan Church of Christ in New York City. She is a graduate of Pepperdine University and Fuller Theological Seminary, and recently completed a Doctor of Ministry degree at New York Theological Seminary. She spent the first part of her ministry in hospital chaplaincy and has been in congregational ministry since the early 2000s. She is one of the leaders of the Community of Women Ministers, a group that provides support and friendship for Church of Christ women pursuing vocational ministry.