When Your Kid is the Biggest Loser

The day my daughter came home from 5th grade and announced she’d earned a spot to compete in the conference spelling bee, I was shocked—not because she wasn’t smart enough. In fact, I briefly envisioned her spelling a seven-syllable word to win the Scripps National Spelling Bee on TV (What English-teacher mom wouldn’t love that?)

No, I was surprised because she was terribly shy and avoided competition. She feared failure, and if there was a chance she would fail, she wouldn’t try. So I was really proud. This would be a big step for her, standing on a stage with students representing the area middle schools, stepping up to a microphone in front of a big audience, positioning herself to be judged. I was sure this would be a milestone in her young life. And it was. Was it ever.

It all started with the multi-page list of 1,000 words that sat in the middle of our kitchen table, which soon became our battleground. She had zero interest in studying. I divided the list into manageable parts that she could master each day. She wouldn’t look at it. I read words aloud and forced her to practice. She spit out letters quickly, misspelling even the easiest words she already knew. “Slow down. Slow down,” I’d tell her. I suggested she write the words if she didn’t want my help. Her attempts were thoughtless and illegible.

After a few days of her disinterest, I asked if she was sure she wanted to compete. She said yes. When I asked why she wouldn’t study, she said she would. I explained if she weren’t going to take the spelling bee seriously, she should drop out and let the alternate take her place. I feared her fear of failure was defeating her.

As competition day drew closer, she seemed a little more interested in preparing. She made it through the list, marking off the words she knew and reviewing the words she didn’t. While it was an effort, it wasn’t a winning effort, but that was her choice. Then her fear began to surface. “What if I’m the first one to spell a word wrong?” she finally confided. I assured her she wouldn’t be, that the easiest words would be first and she was a good speller. Still, she repeated multiple times, “I hope I’m not the first one out.”

When we arrived at the host school, my daughter joined the other contestants on the stage. She was so tiny and cute in her favorite outfit—a red plaid skirt, a white blouse with a black tie, and a plaid beret. And I was so proud. I was pretty confident we wouldn’t take home the spelling bee champion, but that didn’t matter. My daughter was in an auditorium, absolutely petrified, forcing her shy self to do all the things that were most uncomfortable to her. That was more important than a trophy. She glanced at me and her dad often, and we’d smile and nod, trying to bolster her courage.

Then the moderator explained the rules to the children and prepared them for a trial run. When it was my daughter’s turn, she stepped up to the mic and received her practice word: puddle. Easy enough. But then she asked questions I never heard her ask before: “Can you repeat the word? Can you use the word in a sentence?” She still looked terrified, but she took control of the moment. Then she quickly spelled p-u-d-d-l-e. Slow down. I tried to push my brainwaves through the audience and into her hard little head.

Round 1 began. Words were pronounced and spelled and parents clapped as children stepped across the stage to wait for the end of the round. Finally it was my daughter’s turn. She approached the mic and looked at the pronouncer. 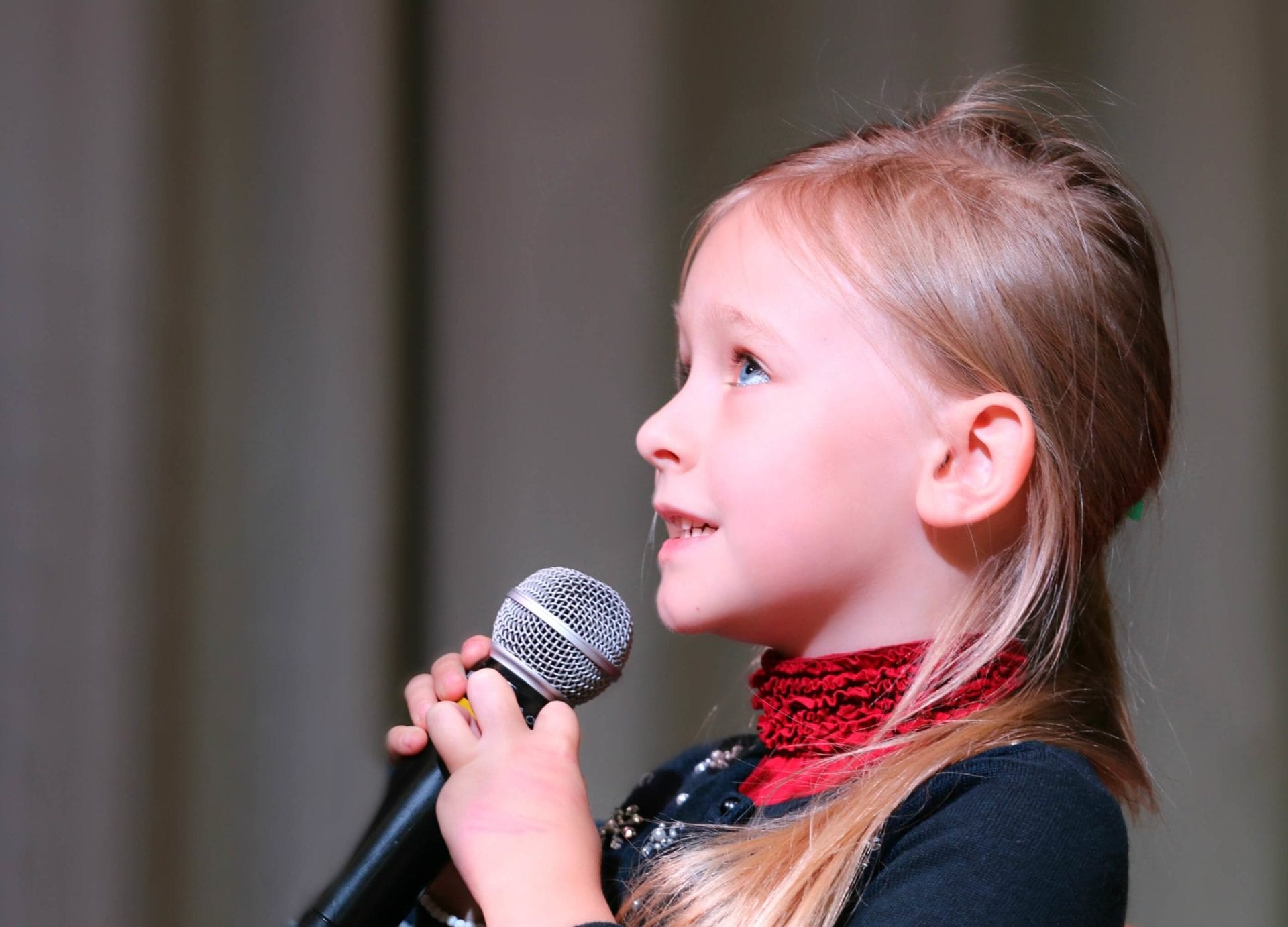 Relief washed over me. I could see it on my daughter’s face, too. Easy-peasy.

Lightning fast she rattled off h-a-p-p-y-n-e-s-s. She smiled.

My daughter exited the stage and took a seat in the area reserved for students who were eliminated. She sat there, surrounded by empty chairs, alone, the first one to spell a word wrong—her biggest fear.

She is not a crier. When she was little and would get hurt, she’d struggle to hold everything in. I would whisk her away from the crowd to a private place and tell her, “It’s okay. You can cry.” Sometimes she refused; sometimes she sobbed. But as she sat alone in loser’s row, I knew it took every ounce of her to hold back her tears of humiliation. As the spelling bee continued, Hubby kept looking at her and whispering to me, “This is awful.” He was feeling it, too.

After the last two contestants battled it out, we congratulated them and found our daughter who struggled to hold a composed smile. We left the auditorium, and the closer we got to the car, the harder her quiet tears fell. When we were a safe distance from others, I pulled her to me and let her muffle her sobs in my shirt.

I wanted to say, “It’s okay…” but it wasn’t okay. She needed to feel what she was feeling. I wanted to say, “I told you so.” But I couldn’t say that either. This wasn’t about Mom being right. We’d discuss it…but the car ride home wasn’t the time. I would let a day or two pass before I launched into the mom lecture titled “Now What Did You Learn from This?”

But my lecture plans were cancelled.

That night as I tucked her into bed, she was still fighting tears. I pushed hair off her forehead and kissed her nose and said, “I’m sorry, Sissy.” Because I was. It’s tough to learn tough lessons. She looked up at me with big green eyes full of tears and squeaked out, “I don’t think I tried hard enough.”

I didn’t say a word…although I wanted to. But there was nothing to say. She got it.

I wanted to assure her that she did try hard enough—because I’m Mom and I wanted to ease the yuckiness she felt—but I couldn’t tell her a lie.

I wanted to downplay it, make it feel smaller for her. It was just a spelling bee. Did it matter? The lesson mattered.

Instead, I reassured her I love her and always would—no matter how big the win or how big the loss—because her value isn’t based on either.

To this day, we don’t speak about the spelling bee. It doesn’t matter that years have passed and she’s a college girl now on scholarship. But occasionally when her Daddy wants to pester her, he’ll ask, “Can you spell happiness?” I dodge because an object will likely fly in his direction.

It’s a lesson that still hurts. But the most important ones usually do.

This post originally appeared at KarenSargentBooks.com, published with permission.

Previous articleAn Open Letter to New York — Sincerely, a Former Teen Mom
Next articleTo The Momma Sitting in the Dark With Tears Streaming Down Your Face: You’re Not Alone

Karen Sargenthttp://www.karensargentblog.com
Forever a champion of moms of all ages at all stages, Karen Sargent blogs at The MOM Journey where moms aren't perfect and that's perfectly okay. Her first novel, Waiting For Butterflies, was named 2017 IAN Book of the Year and received the Foreword Reviews Gold for Christian Fiction. Her writing is inspired by her momlife, which includes raising one husband, two daughters, and hundreds of high school students. Visit Karen at KarenSargentBooks.com.