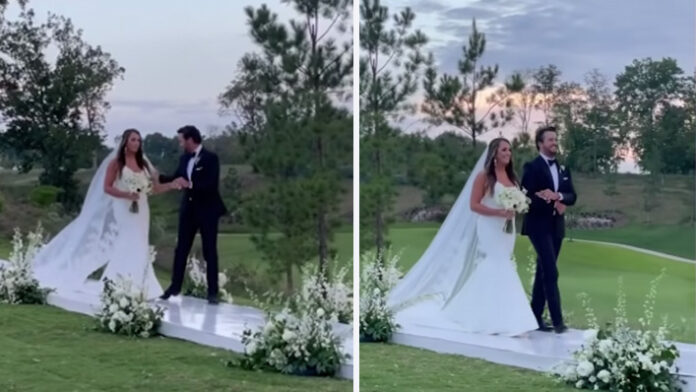 Luke Bryan is one proud uncle! On September 5, the American Idol Judge walked his niece, Jordan Cheshire, down the aisle as she married long-time love, Clint Eudy, in an intimate wedding ceremony in Tennessee.

Jordan, 26, is the oldest of three children of Luke’s late sister Kelly and late brother-in-law Lee. In 2007, Kelly was at home with her young son when she passed away suddenly at the age of 39. Seven years later Lee died of a heart attack. He was 46-years old.

Ever since their deaths, Luke and his wife Caroline have been parental figures to the three kids, and even decided to raise their nephew Til, who was just 13 when his father died.

So it was only fitting that Luke be the one to fill in for Lee on Jordan’s wedding day and walk her down the aisle.

The country singer rubbed his niece’s hand as they began to walk down the floral-lined aisle, Luke beaming with pride. But fans can’t get enough of the moment when the 46-year-old pauses to sweetly fix Jordan’s veil.

At the end of the aisle sat two seats covered in flowers, in remembrance of Jordan’s parents. It was just one of the ways the couple honored her parents throughout their special day.

Later on during the reception, Luke also shared a dance with his niece to Phil Collins’ “You’ll Be In My Heart.” The sweet moment was captured on camera as Bryan snuggled Jordan close and patted her on the back before fixing her hair.

See more footage from Jordan’s big day in the video below:

This ‘Slow Down’ Video Has 17 Million Mamas Weeping — Breathtaking!