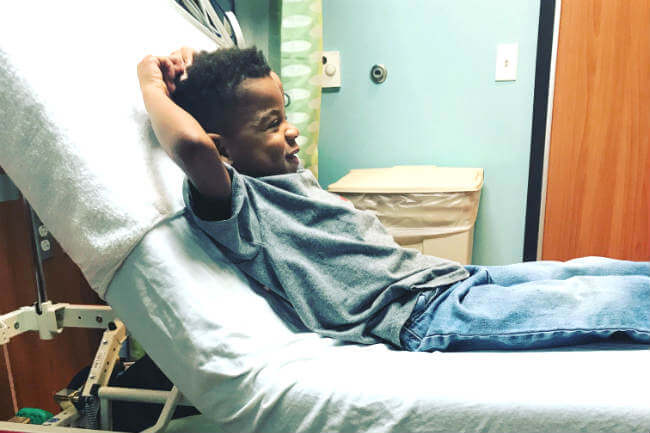 Darkness loomed as we walked hand-in-hand into the Alabama Children’s hospital that Friday morning. Another heart procedure awaited our six-year-old on the other side of those doors. He was pretty clueless. We were pretty anxious knowing the story could fall apart right as it was getting good. Read more here about our questioning faith.

He wasn’t showing signs of needing another heart-procedure, the doctors just questioned if this was a miracle after all.

He’s already endured two heart surgeries with the threat of one more because kids don’t usually live with half a heart. But this kid does. God in all His mercies gave him the best surgeon in all the nation at only four days old. With God’s healing power he did two experimental heart surgeries, one at just four-days-old and one at seven-months-old.

And now six years later, the surgeons can’t quite explain it. They scratch their heads in disbelief because their medical minds can’t explain why his heart looks so good, so they do the only logical thing they know how; another heart catheterization to confirm what we already know as true: he is a walking miracle.

It’s a question often asked from the disappointed, and a question I’ve been wrestling with: Why doesn’t God heal everyone? Because you can storm heaven with a thousand prayers and join every prayer chain from every church in the area and His will still be done.

I’m not sure why two weeks after his procedure I’m shocked as the cardiologist confirms there is nothing wrong with his heart. And I wish I could say it was because of our firm, unwavering faith, and all the religious acts we performed, and you should try them too if you need healing. I can’t.

After I talked to the cardiologist, only tears came. Tears of relief and tears of questioning. Why did God choose to heal my son? What about all the thousands of children waiting for miracles? Are you going to heal them, too, God?! Can’t it possibly be something my husband or I have done or not done?

If I believed it was my actions and not God’s, then I’m left pointing fingers at others who are still waiting for a miracle. I could begin thinking I’m somewhat better than my sister who’s praying for God to restore sight to her daughter’s blind eyes. And I’d be left offering prideful advice on how to pray prayers that move the heavens to the hundreds of others waiting for a miracle.

Is my faith somehow superior to theirs? Are their prayers weak and lack power? Do they not even have faith as big as a mustard seed? Because that’s all, it takes. Or maybe they have sinned or not given enough because isn’t that what churches preach? Or perhaps I should tell my husband his father died at the early age of 55 because his family didn’t believe enough or give enough.

I once heard a pastor say, “the tithe breaks the curse.” The last time I checked Jesus was the one who broke the curse.

I know this may be hard to swallow, but Jesus didn’t heal everyone while here on earth.

In the first chapter of Mark, it states, “He healed many who were sick with various diseases and drove out many demons.” (Mark 1:38, italics mine)

The next day while Jesus was spending time with the Father in prayer his disciples were looking for him. “When they found him, they said, ‘Everyone is looking for you.’ But Jesus replied, ‘We must go on to other towns as well, and I will preach to them, too. That is why I came’.” (Mark 1:38, italics mine).

See, Jesus came to preach the gospel! And when we begin to make it more about the miracles and less about Him we lose sight of what’s essential: salvation. And if we make it about what He should do rather than what He could do, Jesus becomes a performer rather than our Savior.  Guilt and shame can quickly creep in and steal our joy and peace when the Gospel of Truth is lost.

Don’t get me wrong, Jesus heals and loves to heal. My son is a testimony to His healing power! Let’s not love the miracle more than the miracle maker himself. Let’s not allow pride to build in our hearts that we lack compassion toward the broken and hurting.

We spent five long years wondering and questioning if God was going to perform a miracle on our son. Many nights were spent crying out in prayer to heal his heart. Countless healing services left us frustrated and disappointed. Hundreds of dollars were given in the name of healing. Until one day, I heard the Holy Spirit say, “That’s enough! No more healing services. No more prayers offered for his healing. Just worship and praise me even though you don’t see the miracle.”

I don’t have all the answers, and I don’t know why God heals some and not others. But this is what I learned in the last six years while waiting for a miracle…

Be in pursuit of Him. Maybe the only way to make sense of it all is to be in pursuit of Him as He relentlessly pursues us. And perhaps we pursue Him by surrendering it all, even the difficult unanswered prayers. I’ve found when you give Him all the questioning and trust Him in the journey, He will give you peace to walk out the arduous journey and you will experience His presence like never before.

Paul states, “But if we are to share His glory, we must also share His suffering” (Romans 8:17).

Release all guilt and shame. Healing is not up to you. It has nothing to do with what you do or don’t do. There’s no shame when the healing doesn’t come, or the death occurs because, “Therefore, there is now no condemnation for those who are in Christ Jesus” Romans 8:1. Live free knowing “this came about so that God’s works might be displayed in you.” John 9:3 paraphrased. Feelings of failure can rob you of enjoying anything good, let go of the lies you should have done more.

God is good all the time.  So yes continue to pray for the miracle till the end, “But even if he does not, we want you to know, Your Majesty, that we will not serve your gods or worship the image of gold you have set up” (Daniel 3:18). God is still good and praise Him for it!! Mediate on His goodness.

Never imagine the future without God in it. Often when we meditate on the future, we think about it without God there, allowing fear to creep in and steal our hope. No matter what happens our promise is: “Be strong and courageous. Do not be afraid or terrified because of them, for the LORD your God goes with you; he will never leave you nor forsake you” Deuteronomy 31:6.

As we wrestle through our unanswered prayers, let’s not forget, “For everything comes from him and exists by his power and is intended for his glory. All glory to him forever! Amen” (Romans 11:36).

This article originally appeared at LeaTurner.com.

Lea Turner
Lea Turner is a wife and mother of four, 3 grew in her belly and one in her heart. She is on a journey of resting fully in the love of the Father by letting go of striving and walking fully in her identity. She has a passion to inspire others to work from a place of rest rather then strive from a place of anxiety, awakening them to their identity in Him. Lea blogs at leaturner.com.