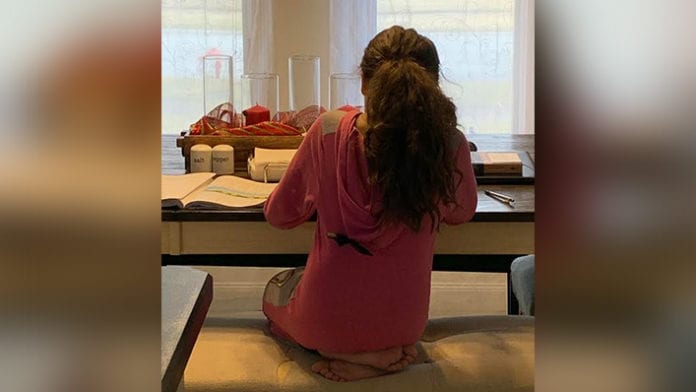 Have you ever seen two mountain goats on the same rock? One has claimed that territory for themselves and along comes another with the same idea. Next thing you know, the goats are butting heads. Real head to head, horns locked, no holds bard stubborn action. That is what having a strong-willed daughter feels like. Mom and daughter become two stubborn goats, occupying the same space, neither one willing to give up or give in to the other.

Now, toss in a mandatory shelter-in-place order and that head-strong goat morphs into a full-grown charging bull. My daughter is the bull. Strong-willed. Stubborn. Undeterred. And I, her mother who loves her more than life, have become her matador. With a great respect for the bull, I inadvertently manage to wave the red flags before her, spurring on her temper. I spend my time drawing her attention all the while trying to avoid impalement by her pointed temper.

Our family is currently safely at home in 2,400 square feet. Many would think that is plenty of room for four people to remain relatively sane while the world battles the pandemic. On a typical day, this is indeed plenty of room for my family to function while not driving each other to within inches of their sanity. Then, there are those days. Those days where my ten-year-old daughter decides she has to fit no less than a million words in the fourteen-hour span between waking and sleep. Those days where her ponytail just won’t come out right thereby ruining her entire day. Those days where her brother, a sometimes purposefully annoying fifteen-year-old, will do everything imaginable to irritate her. It is those days that 2,400 square feet might as well be 400 square feet.

As the mom of a spirited pre-teen girl, I find myself facing each day with a curiosity befitting most scientist. I never know exactly which side of my little girl I will be graced with each morning I flip on the light. I find myself cautiously approaching, as one approaches a freshly released bull, as she enjoys her morning protein shake on the couch. I’m gauging the brightness of her eyes, tone of voice, body position, before launching into the plan for the day.  I’ve pulled the red cape from behind my back. I give it a gentle flick as I go over what I’d like her to accomplish after breakfast. Typically, it is relatively simply tasks like make her bed, put on real clothes, brush her teeth and brush the crazy cacophony of bed hair atop her head. Then, I wait. Will she charge?

I sigh in relief when she smiles and happily agrees, but I know we’ve only just begun. Like any child with the attention span of a gnat, I find myself gently reminding her that her bed looks like she fought wolves in it all night and still needs to be made. The red cape is flying again, and she often edges toward it. I barely miss the horns as her bed is hastily made and she makes her way into her classroom, more cheerfully know as our dining room, for the day’s lessons. While schooling at home as not evoked many strong emotions, the social butterfly within her is going through withdrawals from lack of human contact outside our family. The red cape is waved again as I remind her to look at each class carefully and to read all of the directions. Her cute little nostrils flair and I see that look spring into her eyes.

“Moooom, I know what to do,” leaves her lips in a high annoyed whine and I quickly leave before she escalates.  I’ve dodged the horns again. Whew! I keep a close ear out as I go about my mom duties. I’m not the only one with a red flag out now. School work and frustrations that accompany it wave red flags like banners on Chinese New Year. It only takes one to set her off. And watch out when it does. That charging bull gets a hold of one red cape and suddenly all she sees is red.

Without warning, my sweet, huggable, loving daughter will morph into a raging bull in a china shop and nothing is safe. Over the years, I have learned to read her warning signs and how best to avoid being destroyed by her horns. It took time. We are talking many years of doubting my own abilities as a mom. There were tears spilled behind bathroom doors and yelling at my poor husband who was only trying to help. I blamed myself; swearing I must have done something wrong when carrying my delightful daughter within me. She would yell and scream and cry. I would yell and scream and cry. She threatened to run away and live in the backyard more times than I care to admit or even count. She’s even gone so far as to completely destroy her room, flip her mattress, strip down naked and stand in the middle of the room screaming to the top her lungs as if Jack the Reaper was before her. Oh, yes. Her little horns were quite sharp and boy did they hurt my momma heart.

One particularly horrible day, we were fighting about a shirt. Her favorite shirt, to be exact. Bright pink with a unicorn on the front that was two sizes too small and headed to Salvation Army for some other little princess to wear. She saw it there amongst the other items for donation and without warning, Hiroshima occurred and destroyed the peace of our day. She went from Ferdinand to the bull in a Bugs Bunny cartoon in the blink of an eye. At seven years old, I thought surely we were done with these fits of rage. Wrong! I sat there, warily watching and listening to the tearful spew of venom flowing from her. Eyes hot and fired up, I became the worst person ever in her world.

My husband was at work and he’s usually the calmer of the two when the switch flips. Panic set in. I would have to handle her on my own. I sat down on the floor in front of my stomping, screaming, crying child and asked her what the problem was. She continued to go full steam ahead screaming unintelligibly for another fifteen very long minutes. I didn’t interrupt. I was honestly afraid to speak. Then, something strange happened. She stopped. The ear-splitting shrieks melted down to a soft whimper. Shiny little eyes focused on my face and she crumpled right into my arms.

That was three years ago. Now, at ten, she still pulls out her horns every now and then. It looks different though. Now, she stomps and slams the door of her bedroom. She packs her unicorn collection in her big pink duffle bag and threatens to live in the three seasons room. She sits stubbornly silent in the middle of her bed crying just loud enough for us to hear her in the living room. And, me? Well, I sit on the couch doing Sudoku puzzles on my phone until the whimpers fall quiet. Then, I calmly go into her room, holding back a chuckle at the packed bag of unicorns and blankets (no clothes, just stuffies and blankets), and sit next to her on the bed. When she’s ready, she’ll climb into my lap and apologize for being whatever it is she feels in the moment.

During this time of shelter-in-place, we’ve had a few of these moments. She misses her friends in class. Her friend lives down the street but they closest they get is FaceTime playing dolls. Her brother is the only other person she sees besides her dad and I. Heaven forbid the weather says no outside play today which is a fate worse than death for her. Too much schoolwork. Not enough sleep. Restless nights. We have dealt with all of them in these six weeks. I see the signs of an impending bull fight from a mile away now. Everything I say gets attitude in reply. The sun is to bright or not bright enough. Nothing is the house is fit for lunch consumption. I hold fast and wait her out. And when the horns come out, and she charges, I deftly avoid her until she’s run out of steam. When she’s done, I sit beside her and I wait. And when she crawls into my lap, cries out that last little bit and apologizes, I reset the counter on the days between incidents counter and go on.

Take heart momma. That strong-willed little person who is driving you crazy can’t make sense of the current world they are living in. It drives them twice as crazy as it does us because we’ve lived here longer. Don’t lose hope. Let them work it out and reap the benefit of the hugs that follow. One day, that strong willed bull in your china shop will put that energy to good use. Until then, hide the breakables and know that this too shall pass.

Previous articleJust Breathe: The One Practice You Need in a Time of Uncertainty
Next articleMama, Now Is the Time to Plant a Victory Garden in Your Children’s Hearts

Jamonica Disser
Jamonica Disser is a full time pastor's wife, mother or five, grand-mother of two, worship singer and online ministry leader who loves to not only read books, but write them as well. When she's not mastering the art of organized chaos, also known as wrangling her crazy family schedule, she loves spending time with her family watching movies, playing games and just enjoying each others company.