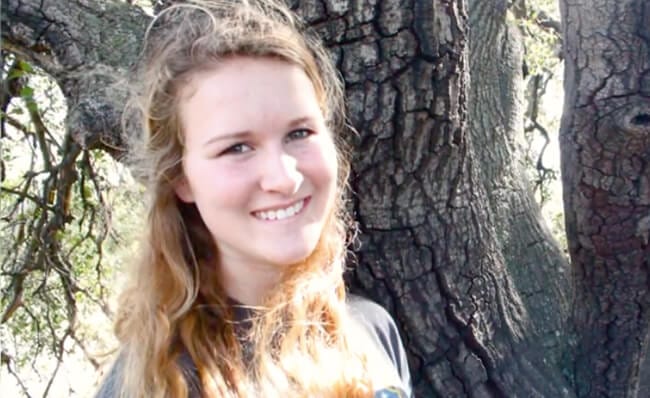 After Daughter’s Sudden Death at College, Parents Urge Others to Know the Warning Signs of This Silent Killer 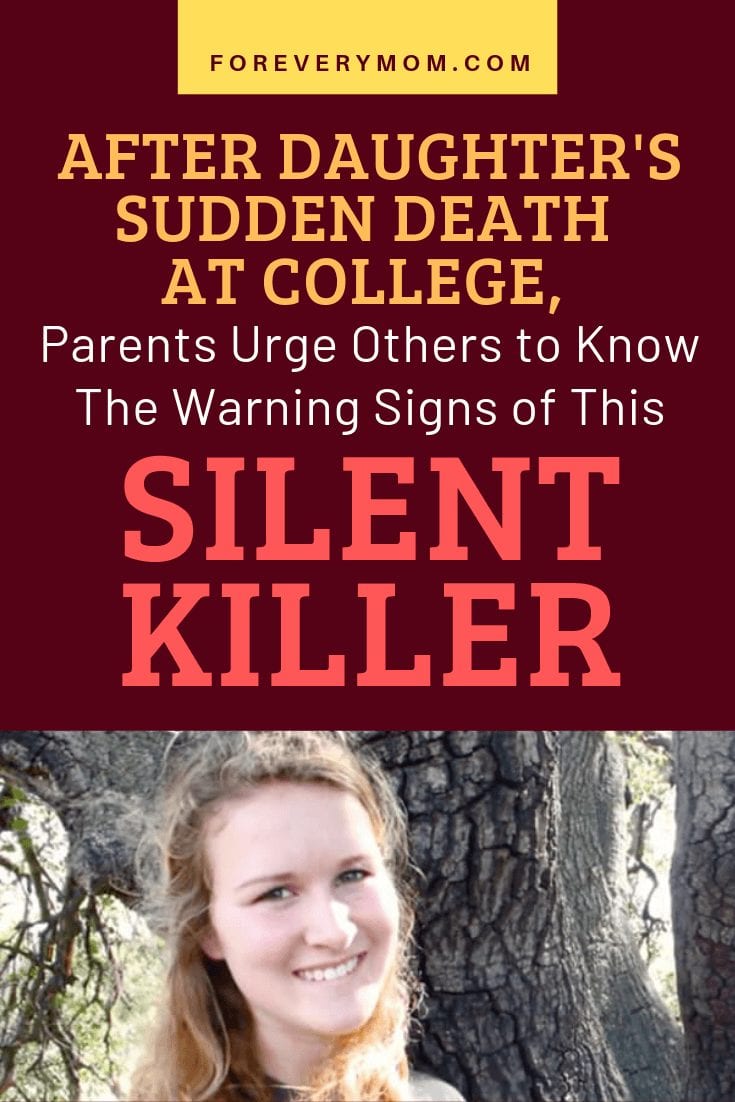 Like most kids in their freshman year of college, Sara Seltzer was soaking in all that life as a young adult had to offer. 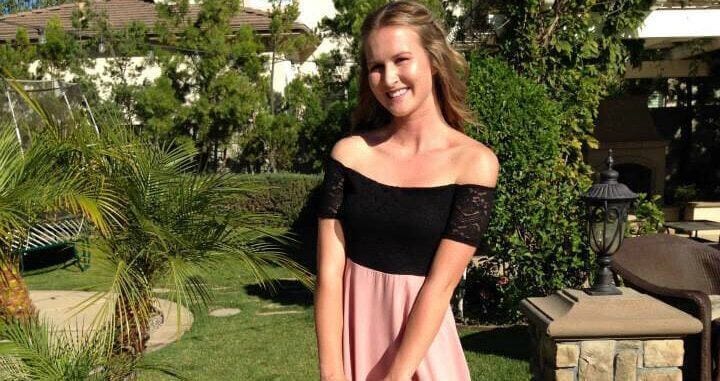 After rushing a sorority and starting classes at San Diego State University, the 18-year-old was settling into the swing of her new life when tragedy struck. On a Sunday night in the fall of 2014, Sara called her parents and told them she had a headache. And by Monday morning, it appeared that she had come down with the flu.

Her parents encouraged her to pick up some Theraflu and get some rest, expecting that the symptoms would subside soon.

But just hours later, Sara’s father Greg received a text from one of her friends informing him that his daughter was in the emergency room.

Greg and Sara’s mom, Laurie, got in the car and raced to the hospital.

Knowing that Sara was a healthy teenager who had never been seriously ill before, Greg and Laurie tried hard to reassure themselves that “They’ll save her and she’ll be fine,” Greg recalls thinking on the drive. 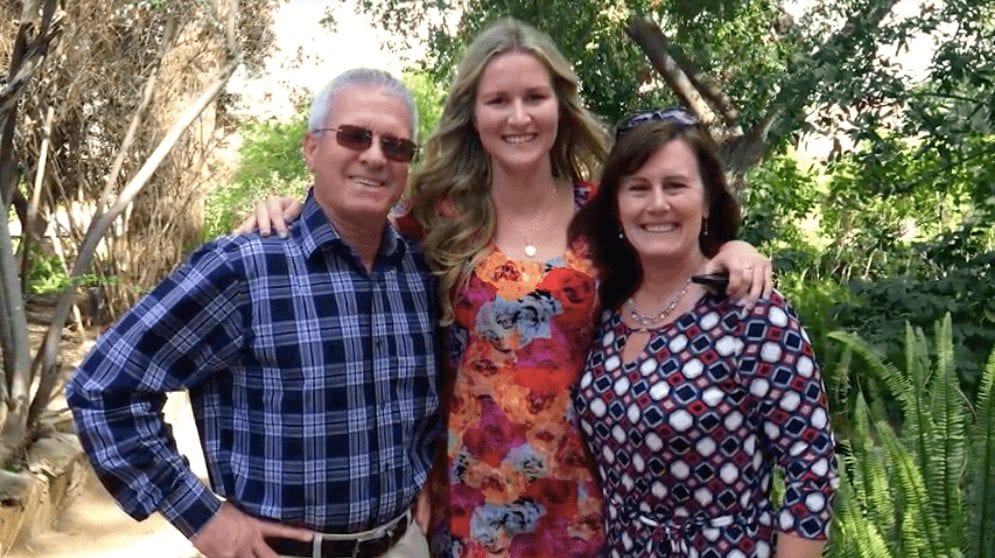 When they finally arrived at the hospital, Sara was in a coma in the intensive care unit (ICU), Doctors told them that they weren’t seeing any brain activity and had diagnosed Sara with bacterial meningitis.

“We just didn’t know anything about bacterial meningitis,” Laurie said. “We didn’t know to even ask about those symptoms.”

They soon learned that bacterial meningitis can be extremely dangerous, fast-moving, and fatal if not caught in the early stages. For Sara, it was too late.

“All of a sudden, within two days, we lost her,” Greg says.

Sara had previously received the meningitis vaccine, however, it was only effective against the “A, C, W, and Y strain — not for the B strain,” Laurie says. “They came out with the meningitis B vaccine shortly after she passed away.”

And although it’s now available, Laurie says many teens and young adults are unknowingly unprotected against this silent killer because the meningitis B vaccine isn’t mandated.

The National Meningitis Association (NMA) recommends that teens ask to receive a meningitis B vaccine at their 16-year doctor’s visit, being that teens and young adults ages 16 to 23 are one of the most at-risk groups according to the Centers for Disease Control and Prevention (CDC). It’s a simple ask because it’s also recommended that teens receive the booster for the meningitis ACWY vaccine during their 16-year visit.

Since tragically losing their youngest child, whom Laurie describes as “tall, beautiful, vibrant — really a ray of sunshine,” the couple has dedicated themselves to raising awareness of meningitis B, and the importance of teens getting vaccinated. 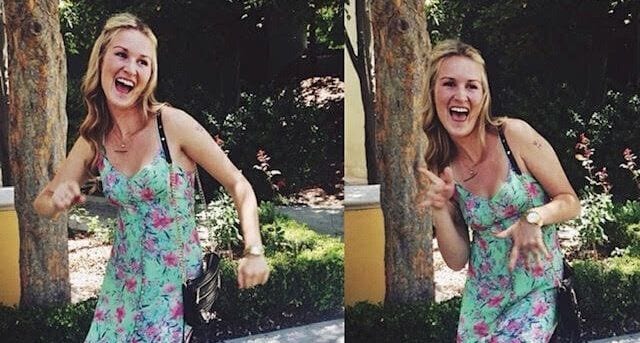 According to the NMA, meningitis B outbreaks occurred on 20 different U.S. college campuses from March 2013 to November 2017. That’s because the bacterial infection tends to circulate in crowds of people living in close corners — such as dorm rooms. As a result, some schools are starting to take action.

Beginning in the fall of 2019, San Diego State University will require students under the age of 24 to be vaccinated against meningitis B before starting college.

“We hope that eventually all schools require all incoming freshman to be vaccinated,” says Greg.

In addition to getting vaccinated, it’s important for teens and parents alike to know the signs and symptoms of bacterial meningitis. 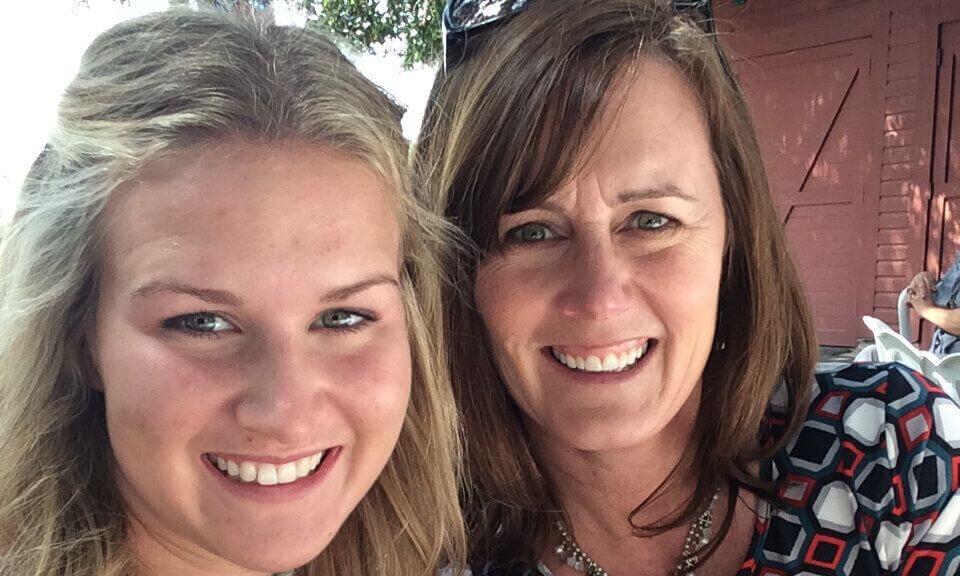 “We wish we had known more about meningococcal disease,” Laurie says, “I wish I had known the symptoms, but we just didn’t know.”

Signs and Symptoms of Bacterial Meningitis

The CDC describes meningitis as a bacterial or viral infection of the fluid surrounding the brain and spinal cord, which usually causes inflammation or swelling. 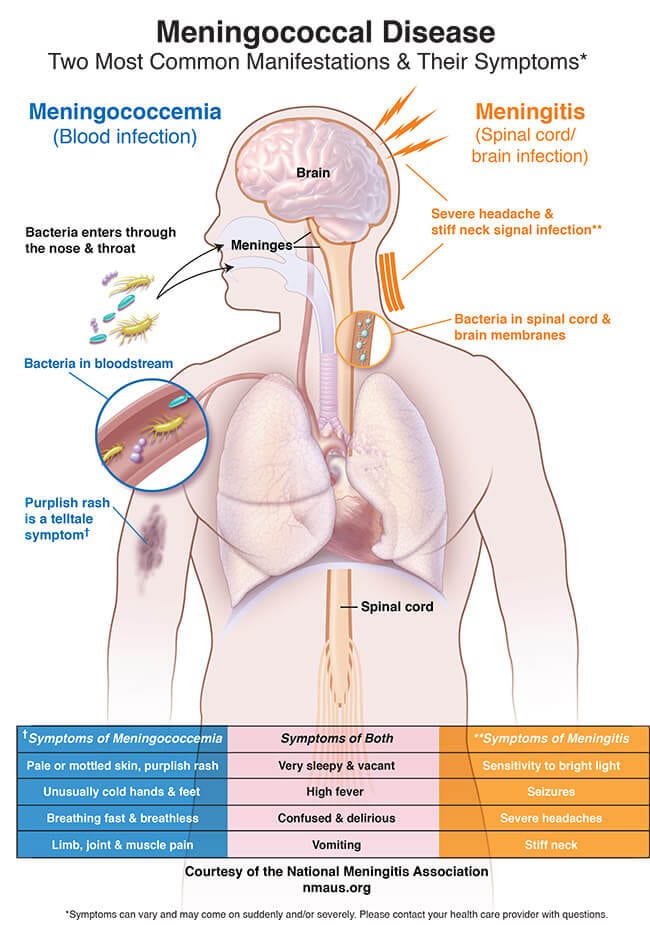 In its earliest phase, meningococcal disease can cause pale or mottled skin, a purplish rash, unusually cold feet and hands, fast breathing, along with limb, joint and muscle pain.

As it progresses, symptoms include feeling very sleepy or faint, a high fever, vomiting, confusion or deliriousness.

Meningococcal disease starts in the nose and throat, where it multiplies before entering the bloodstream. Once in the bloodstream, the bacterial infection essentially poisons the blood, which in turn, causes swelling of the protective lining which covers the brain and spinal cord.

Once the swelling begins, the bacterial infection becomes meningitis. Symptoms include light sensitivity, seizures, severe headaches, and a stiff neck.

“For all the young students out there, our daughter was just like you…was healthy, was in the prime of her life,” Greg says. “And in a matter of a few days, she died from bacterial meningitis. I encourage all those students, for her sake, to get vaccinated.” 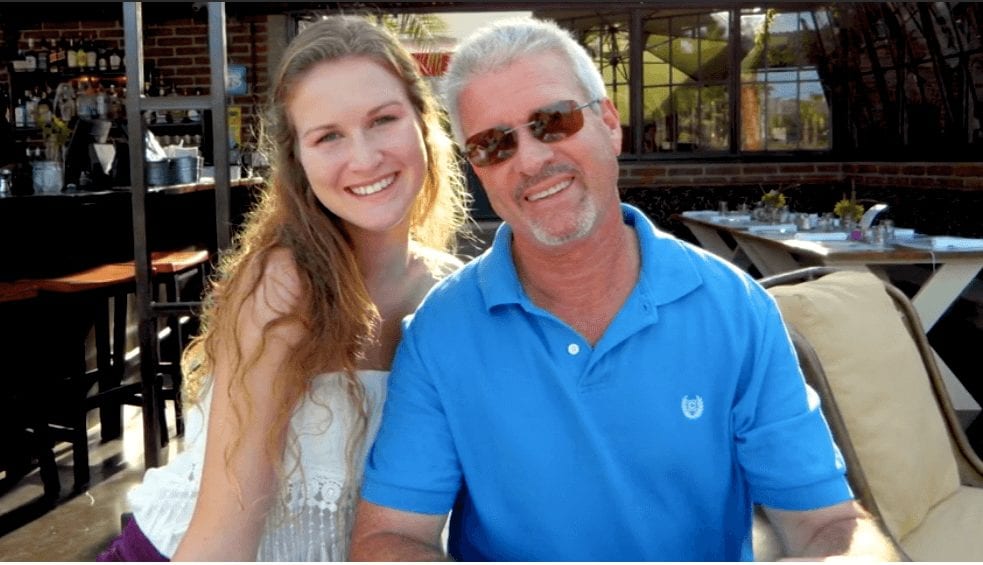 Previous articleParental Anxiety: 5 Tips for When You’re Feeling Anxious
Next articleTo My Mom Friends Who Had Kids Before Me: I am Sorry I Didn’t Know