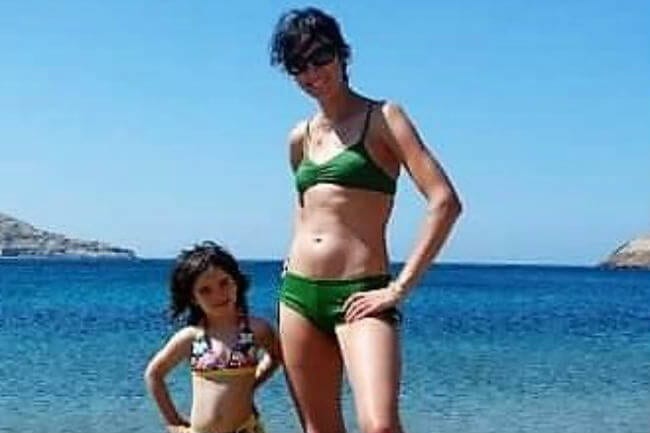 Dear Moms: Here’s How NOT to Get a Beach Body

Exhibit A: Eat an apple and a wedge of cheese. Only an apple and a wedge of cheese. Cut them into razor thin slices so that you take one hour to eat, two if you are truly in control. Pretend-savor each bite because everything, now, tastes like the thin communion wafers that dissolved on your tongue as a child. That is, like flour paste. Soon after your furtive, spartan meal, you will have to throw up what you have eaten. You are aiming for negative calorie tally. SO:

Run, obsessively, five miles a day, every day, even when your knees and hips hurt, even when your heart becomes a battering ram inside your chest, even when the doctor insists on a heart monitor because he’s worried about arrhythmia. And sit-ups. One thousand at night. Though each day you add twenty-five more. More means less. Less of you taking up space, less of you filling clothes, less of you to hug and love.

Consider Exhibit A again: You’re in Greece on a beach in Serifos with your daughter. That’s right. You don’t remember because your starving brain was devoted to keeping you alive, not inscribing memories. You look happy enough in that green bikini you bought from the Juniors’ Section (a juvenile 35 years old!). You wore those angles of deprivation with a soldier’s determination: ribs a visible cage, spine a knotted rope, and a face that was all sharp hollows.

Your daughter mimics your pose. How much she wanted you to see her, for you to get well, for you to start eating again, smiling again, laughing again. Momma, she said. It’s hurts to hug you. Your bones hurt me. Which is also what your then-husband said during sex. He’d shift, trying to find a place for his body against yours that didn’t hurt, too.

Do you remember that? How you pretend-smiled so wide that your head split in pain at the end of the day? How one night, you left your then-husband and sleeping children in the hotel room and walked to the beach, oblivious to the stars and honeysuckle and wild thyme, and waded into the sea—calves, thighs, hips, shoulders—intending to swim, to keep swimming until the sea took you out too far to return? When you returned from that vacation, exhausted (rumination, deprivation, annihilation of joy), you believed you would never be able to share a meal with your family again, so you swallowed all your pills, and when you woke up in the ICU, you agreed to an inpatient treatment program. And then another. And then another. And then another. And finally, one last time.

Do you remember what you promised? I will do whatever it takes to have the life I want.

You took this photo as a Baywatch parody. Rather, your son took the photo, directing your pose (Wider mouth, Mom! You need to work it!) while your daughter laughed at your silliness from the beach blanket where she was drawing in her sketch book. On the blanket is an empty bag of Doritos (yours), an apple core (yours), and Sour Worms (also yours). Of course, you share these with the kids. After the beach, because you’ve declared it a mostly-junk-food day, you’ll get frozen custard. Medium cones. Chocolate and banana swirled together.

Everything about this day is bright and beautiful. You bought your son a giant float shaped like a wedge of watermelon and a water gun; he’s been chasing after you through the water. You’re in my sights, Mom, he says. You play catch in the grass, tossing the tennis ball back and forth, admiring the way his body has suddenly stretched up, how he laughs when he misses a catch, and he misses often, and you can feel that your own body is built to move and leap and dive and swim.

You swim out to your daughter where she is floating, basking in the sun, daydreaming about drawing, about art school, about the life that she wants. You swirl her through the water on the float, falling in love with her teenage body, which is solid and soft and vulnerable and strong, taking delirious pleasure in how she is entirely happy, most of the time, inside herself. You think of that other photo, Exhibit A, and how happy you are that she hasn’t mirrored you and that you are so different from each other in so many glorious ways. She leans over, splashes water at you, and says, This is heaven. But stop staring at me. It’s weird.

Now, when you hug your daughter and your son, they hold onto you, sink against your softer, fuller body, returning home to you. Even at eleven and fourteen, their hugs last and last and last. You remember holding their tiny, naked, warm bodies against yours seconds after they were born, umbilical cords still attached, your hearts beating in momentary syncopation: Your body was their home and their bodies became theirs inside yours.

You look at Exhibit B on your phone and consider asking your son to retake the photo. That old ruminating self-critique creeps in. You look so big, it says. You take up too much space, it says. You’ve lost discipline and control.

You look at Exhibit A and see how truly unwell you were then, how you almost disappeared for good, how less of you meant less joy, less gusto. Yes, gusto. Your new boyfriend used this word to describe what he loves about you. You were trying to tell him about your body in Exhibit A, a body he has never known, not like that anyway. I was more than thirty pounds less, you said. But I was in misery and a miserable mother and wife and friend.

I can’t imagine that, he said. You eat with gusto! Healthy food, junk food—you don’t have all these rules. And you know what I think about your body….

Which is what you think about your body these days, too: your body is here for lovecreating and lovemaking, and you swallow this one luscious life that’s been returned to you, swallowing its pain and beauty, rolling them on your tongue, savoring the bright and the sharp, the dark and soft, the more and the more. That is the life that you wanted and now the life that is yours.

Previous articleShould a Christian Woman Wear a Bikini?
Next articleMotherhood Is Not a Woman’s Highest Calling

Kerry Neville
Kerry Neville the the author of the short fiction collection, Necessary Lies, winner of the Sharat Chandra Prize in Fiction, and the forthcoming collection, Remember To Forget Me.. Her fiction and essays have appeared in such journals as The Gettysburg Review, Epoch, and Glimmer Train, as well as in online magazines. She is an Assistant Professor of Creative Writing at Georgia College and State University, and a summer faculty member of the University of Limerick/Frank McCourt International Writing School. You can also find her writing at The Fix and The Huffington Post.