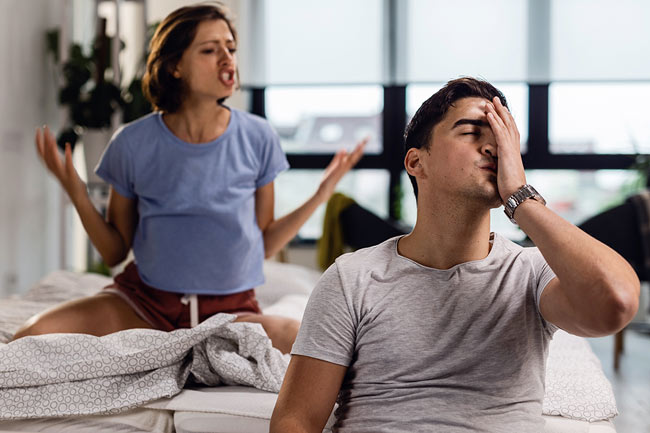 Let’s Stop the Foolishness of Nagging!

I find these Scriptures so powerful and quite funny. A poor man begins on the housetop and ends up in the desert, all to avoid his nagging wife:

It is better to dwell in a corner of a housetop than in a house shared with a contentious woman. Proverbs 25:24 NKJV

It’s better to live alone in the corner of an attic than with a quarrelsome wife in a lovely home. Proverbs 25:24 NLT

It’s better to live alone in the desert than with a quarrelsome, complaining wife. Proverbs 21:19 NLT

This is something the Lord continues to work out in me when interacting with my husband and children. Nagging our kids can result in reduced productivity and low self-esteem. (I know it firsthand. I’m still a work in progress.) Is your husband like the man who has to escape or work late because he knows the nagging will start as soon as he gets home? Of course, nowadays wives don’t even have to wait until the husbands get home: there are cell phones! We can begin nagging as soon as we know they’re driving home. We text-nag throughout the day. Instead of texting some sweet things, we nag through technology.

Nagging is one quick way to mess up your marriage!

Scripture makes it clear that this poor man dreads being home. He’d rather stay late at work. He even volunteers to be the one who locks up, in the hope that when he gets home, his wife will be either too tired to nag or (even better) already asleep. The more he dreads coming home, the more a female coworker who celebrates him catches his attention, providing a tempting opportunity for an extramarital affair—maybe sexual, but usually emotional. Many saved men know it’s a sin to commit adultery but can justify an emotional affair as having someone to “confide in.”

My husband Paul and I were part of a small group for couples, which consisted of his siblings, their spouses, and another couple. We met on Sunday nights to discuss our relationships. Openness and honesty were encouraged. Spouses could share what they wanted their spouse to work on, then give report next week. You didn’t want to be the one whose report card said Incomplete or Needs Improvement! It was at these meetings that Paul revealed I was a nag. Me? A nag? No! At least, that’s what I thought. As the saying goes, perception is reality. I didn’t think I was a nag, but my husband sure thought so.

It was then we came up with a policy in our home: If something needed doing, we agreed on a deadline. I was not to remind him of the task at hand during this time, even if I saw opportunities for completion. If the responsible party (usually Paul) didn’t ask for an extension, post-deadline it was fair game to bring it up and remind him (or nag, for lack of a better term). He was motivated to keep me quiet, so he often got the task done ahead of time or requested an extension. This just about cured nagging in our house, though the “nag monster” slips out now and then.

I write this feeling a little convicted because Paul often asks me to take care of something—maybe replace a missing button, check on someone, send a thank-you card—but if I don’t complete my task in the allotted time, he’s patient and tries not to browbeat me. Whereas I am quick to get on him for not following through, “as usual.”

Think about your home. If your husband doesn’t (for the most part) nag you when you fail to complete your task, then why should you nag him? Jesus admonishes us to remove the huge log in our own eye before removing the tiny splinter in another person’s eye.

In Judges 16, Delilah nagged Samson until he divulged the secret to his strength. Now that is some serious nagging—and the fast track to destroying a home. If a woman nags her husband long enough, eventually, just to get some sanity and peace, he will give in to whatever she wants, even if it will bring harm to the family. My husband preached on this nagging woman one day and raised an interesting point. I’d always wondered why Samson would give in to Delilah while knowing what she was about. Every time he told her where his strength came from, she tested it. I would think after the first time she tied him up with ropes and called in the Philistines, he’d have realized this lady was up to no good. But the power of nagging eventually brought Samson down. He knew she was working for the Philistines, but the power of the nagger drove him to reveal his secret.

She tormented him with her nagging day after day until he was sick to death of it. Judges 16:16 NLT

Sometimes, as a foolish woman, I nag about the things Paul is not getting done, but if I ask myself if I’ve finished everything he asked me to do, the answer is a resounding “No!” As I write, I’m reminded of a button he asked me to replace on his white shirt. It’s been a few years now, but he’s never once nagged me about it. Shame on me!

It’s easy to mistake our husbands’ silence for happiness or contentment. Don’t fall into that trap and find yourself in a struggling marriage because you assumed your husband was happy just because he didn’t nag as you do.

DO YOU BUILD UP OR TEAR DOWN?

A foolish woman drives her husband away by constant nagging and badgering. A wise woman negotiates with her husband and assumes the best of him.

This article is excerpted from Fiona Arthurs’ book, Stop the Foolishness: For Wives

Fiona Arthurshttps://resources.churchleaders.com/
Fiona Arthurs is a wife and mother with a passion to see women fulfilled through discovering their identity and role as women of God. Her desire is to see marriages and family relationships restored in these days when families are under great attack. A renowned international speaker and teacher, Fiona brings a wealth of experience and a broad cultural perspective from which she is able to extract biblical principles for daily living. Fiona is a licensed marriage and family therapist, a wife to Paul, and the proud mother of three children. Fiona and her family live in the western suburbs of Chicago.