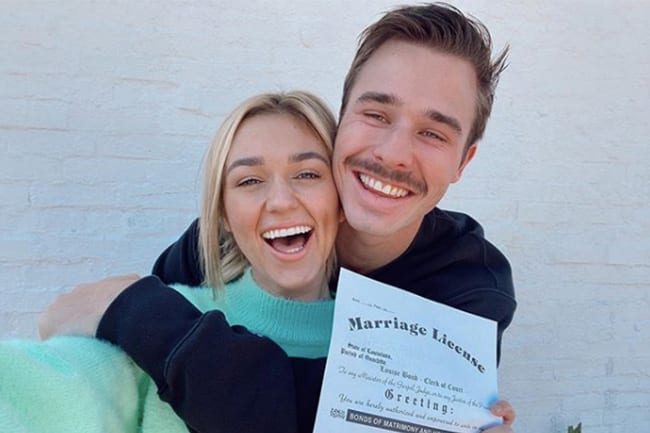 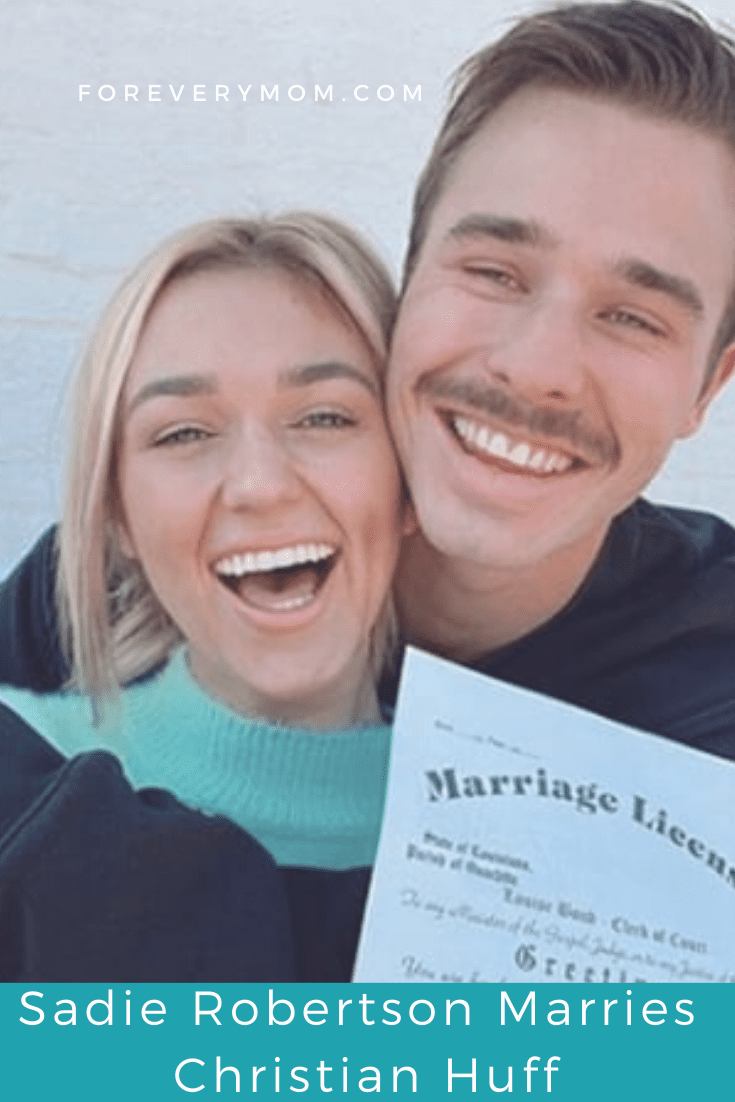 Sadie Robertson, our favorite role model for girls and women alike, is officially a married gal this week!

The Duck Dynasty star tied the knot with her fiancé, Christian Huff, on Monday in a romantic ceremony on her family’s Louisiana farm.

so close to forever

According to People Magazine, the couple transformed a tennis court with tall hedges, lots of roses, and hundreds of string lights to give the space a more intimate and romantic glow. Guests sat on gold chairs with white cushions while the couple stood on a white stage to exchange their vows.

“We’re having it on a tennis court, which is kind of unique and fun,” Robertson told the magazine ahead of the wedding. “Christian and I both love to play tennis and every time we’re home, we play tennis on this court. So we’re like, ‘Well, what if we transformed the court?’ So we’re taking off the net, taking off everything. We’re laying down AstroTurf and lights everywhere all over the fence and white roses. So it’ll actually feel like this nice garden.”

The 22-year-stunned in a pure white strapless dress from Kleinfeld’s with a dramatic train, flowing veil and long white gloves.

Pastor Louie Giglio married the couple in an evening ceremony in front of more than 600 guests, including Sadie’s season 19 Dancing With The Stars castmate Alfonso Ribeiro and Fuller House star Candace Cameron Bure.

Following the ceremony, Sadie changed into a second dress — this one more “fairytale” – like from her long-time favorite, Sherri Hill, and busted out her tennis shoes to dance the night away.

The outdoor reception was held under a large tent, complete with what Sadie calls “a big Louisiana feast, if you will,” including a milkshake station, a coffee station, and several food stations for guests to fuel up and celebrate with the newlyweds under the stars.

“Christian and I both love night; we love the stars and the moon, so I think all of it together is going to be so magical,” Robertson said.

we just did a q&a at our church today and Christian said, “intentionality is rooted in love.” He shared about how he feels most loved when we are most intentional, and it made me think about the concept of being fully known to be able to be fully loved. He engraved in my ring the word “original.” That to me was so intentional and not only made me feel so loved, but made me feel so known. He knows who my original self is and he is promising to love that version of myself forever. This kind of love makes the verse about no fear in love seem possible. It takes the pressure off having to measure up to something worth the concept of love, and just accept being loved for where i am and in who i am. God who originally created us, uniquely made us, fully knows us – intentionally loves us. The Bible says no one has ever seen God, but we see HIM through the way that WE love… I’m seeing it pretty beautifully right now and wanted to share☁️♥️💍

Little did she know, her plans for an epic birthday bash were nothing in comparison to the surprise Christian had in store for her.

Now, five months after their engagement, Robertson and Huff celebrated their love with the ultimate party: their wedding!

“When somebody makes you better and they’re your best friend in the world, you don’t want to spend a day without them. So we’re excited to not have to spend the day without each other,” Sadie said of Christian back in June. “I love his adventurous spirit in life, how much my family loves him, so we’re excited to be able to officially call him family.”

As the newlyweds set off for their honeymoon in Cabo San Lucas, Sadie says she’s looking forward to spending forever with Christian.

“We’re excited to be married and live together, do life fully together and just become one. We’re pumped! We cannot wait,” Sadie said. “There’s a lot of things in life that I feel like might be scary to jump into, but this, there’s never been more peace. I’m just really excited.”

Congratulations to the happy couple!

Previous articleWhat To Do When Your Teen Is Being Bullied
Next articleFellow Moms, Let’s Include our Kids in the Holiday Work