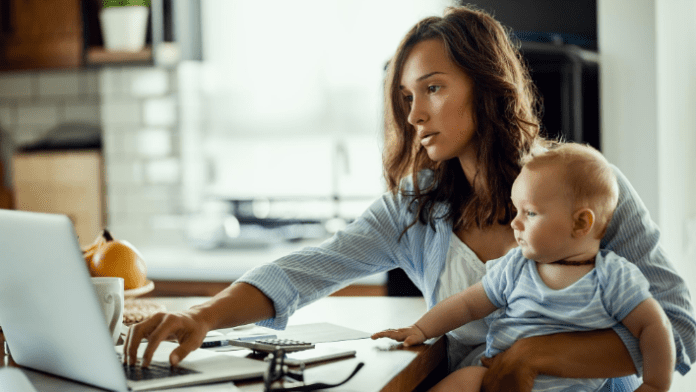 We talk a lot these days about the harmful effects too much screen time can have on our kids. But new studies suggest that increased cell phone usage among parents can also have a lasting negative effect on the tiny humans we pour our hearts and souls into.

Common Sense Media found that parents average more than nine hours per day on their devices. And our kids are taking notice.

In a recent interview with “NBC Nightly News,” three different parents admitted that their cell phones are a constant in their life.

“I have the device with me all day,” one dad said, adding that it’s with him most of the time that he’s awake.

Studies have found a link between parents’ screentime and kids’ behavior, with one report finding that parents average more than nine hours a day on their phones.

NBC’s Kate Snow talks to families and experts about how Americans can better balance life and electronics.

When asked how many hours per day they would say they’re on a device, another mom answered, “pretty much all day.”

Although many parents say they work hard to set good examples of healthy screen time habits, studies have found a link between parents’ screen time and their children’s behavior — and kids picking up on it.

“I’ll say, ‘Mom can you please help me?’ and then I try to say it very loudly, and if she doesn’t listen I just turn off her phone,” one child said.

Others also indicated that it’s hard to get their parents’ attention sometimes, and hearing, “I’ll be there in a minute,” is a regular occurrence.

“I feel like my kids sometimes feel like I’m less important than what I’m doing on my phone,” NBC reporter Kate Snow explains to the kids before asking if they ever feel that way with their own parents.

Their response? An overwhelming “YES.”

As parents, we tend to focus so much on limiting our kids’ screen time, coming up with alternative activities for them to do, and leading them away from the technology that runs our world. But it may be time to check ourselves.

Our kids are “angry, sad, mad, lonely, and frustrated,” Psychologist Catherine Steiner tells “NBC Nightly News.” Children tell her they text their own parents to get attention, which causes a major disconnect among families.

Steiner recommends setting boundaries for device-free mornings, dinners and bedtimes. She also suggests that parents communicate with their kids when they do have to be on their phones, and explain that your attention has to shift for a short period of time.

And remember, our kiddos see and replicate just about everything we do. Actions speak a lot louder than words, so be mindful of your own smartphone usage as you set healthy screen time restrictions for your kids.

Previous article‘Always Check the Toes’—Parents Warn of ‘Tourniquet Syndrome’ After Single Strand of Hair Threatens Infants
Next articleMotherhood Is Priceless, Not Timeless