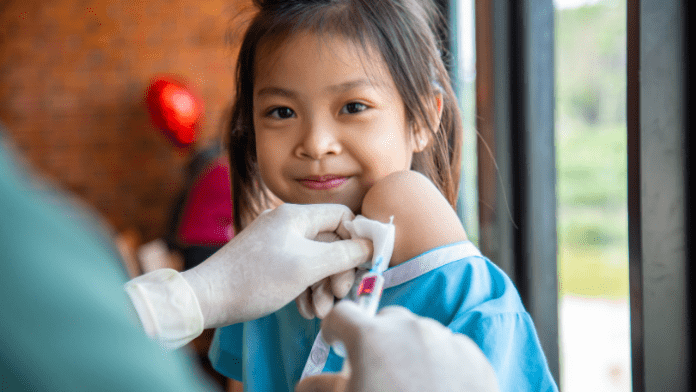 As flu season rapidly approaches amid a global pandemic, doctors across the country are urging parents to get their families vaccinated with the annual flu shot.

The 2017-2018 flu season was the deadliest the United States has seen in four decades with over 80,000 flu-related deaths, and more than 900,000 hospital visits. While the past two years have seen a much-needed decrease in those staggering numbers, doctors across the country are gearing up for what experts are calling a possible “Twindemic” over the next 6-12 weeks as the coronavirus continues to ravage states across the nation.

Despite the desperate pleas from medical workers across the nation, a new study shows that parents are more likely to forgo the flu shot because of several misconceptions about the vaccine. The most common one being that the flu shot actually gives you the flu.

Researchers from the Orlando Health Arnold Palmer Hospital recently conducted a study to evaluate parents’ attitudes about the flu shot.

“We know that there are a lot of myths and misconceptions about the flu,” coauthor Jean Moorjani said in a statement. “In this day and age we have so many ways to get information, so if anybody has questions or concerns, we recommend they talk to a doctor they trust to get the right information about what’s best to protect themselves and their families.”

The study surveyed 700 adults in America and found that more than 50 percent of parents with children under the age of 18 believe their child can get the flu from the flu shot.

A third of those surveyed said they believe the shot does not protect against the flu, while 28 percent believe that it can cause autism.

“After extensive studies, we know that the flu vaccine is safe,” Moorjani said. “You cannot get autism from the flu vaccine. It is not a conspiracy for doctors to recommend the flu vaccine. Doctors recommend it because we know — based on science, research and facts — that it is the best way to protect yourself and your family against the flu.”

According to the Centers for Disease Control, the flu vaccine contains strains of the flu virus that have been “inactivated” or killed, meaning it is not infectious, cannot give you the flu virus, but will work to produce an immune response without causing infection.

“The parts of the virus that are used in the vaccine are completely dead, so you cannot get the flu from the flu shot,” Moorjani assured. “It takes time for your body to get strong and ready for flu season, which is why we recommend everybody get the shot as soon as they can. If you are infected with the flu shortly after getting your flu shot, your body may not be able to fight it off.”

As we gear up for yet another flu season, one that holds several unknowns in the midst of a global pandemic, a blaring reminder is making its way around the internet to further disprove this common flu shot myth.

Nationwide Children’s Hospital in Colombus, Ohio took to Facebook with a post about the flu vaccine from one of their urgent care doctors.

An awesome post about the flu vaccine from one of our Urgent Care doctors: The evening after getting my flu shot, I felt…

“The flu shot did NOT make me sick. It did not cause the flu. This fever is my immune system in action. My body ‘thinks’ I have the flu and is responding as it should. I’m making antibodies so when the real flu comes around later this year, I’m ready to fight it off quickly and effectively.

This common and short-lived inconvenience is much preferred over the real flu. Influenza kills about 1 in 1000 infected persons each year. The flu vaccine is our best shot at preventing this life-threatening illness!”

The earlier, the better.

Doctors recommend everyone over the age of six months should get vaccinated before the end of October. Experts say the vaccine can take up to two weeks to reach full effectiveness, and flu season typically kicks into high gear by the beginning of November.

With Halloween just days away, followed closely by Thanksgiving and Christmas, the holiday season is stacked full of activities, even this year, where the flu virus and other harmful germs are likely to linger in addition to COVID-19.

Avoiding the flu vaccination puts yourself and your family at risk, and makes it more likely for others to catch the flu.

“As a parent,” Moorjani  said, “the flu shot is just another level of protection I can give my kids, and with so many places offering flu shots, it’s really simple.”

The flu shot is not 100% effective. But it can go a long way in protecting yourself and your family this flu season.

If your child does contract the flu, it’s extremely important to take precaution for the protection of others. Be aware of the symptoms, and keep them away from school.

For more information on where you can get the flu shot near you, visit this resource.

Previous articleI’m Not OK. The Pandemic Burnout Is Real.
Next article8 Ways to Quiet Your Anxious Mind