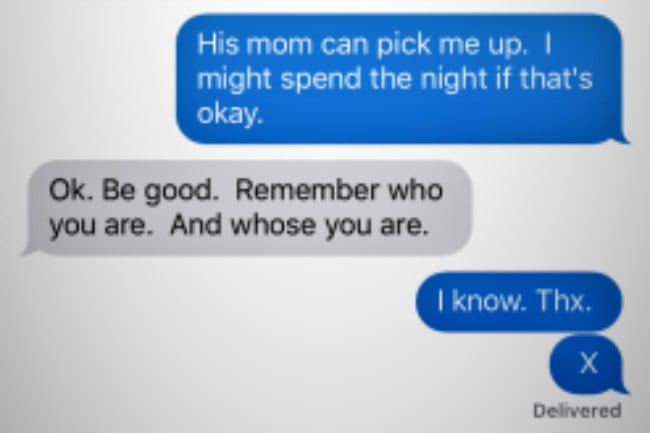 The X-Plan: Give Your Teens a Life-Saving Way Out of a Dangerous Situation 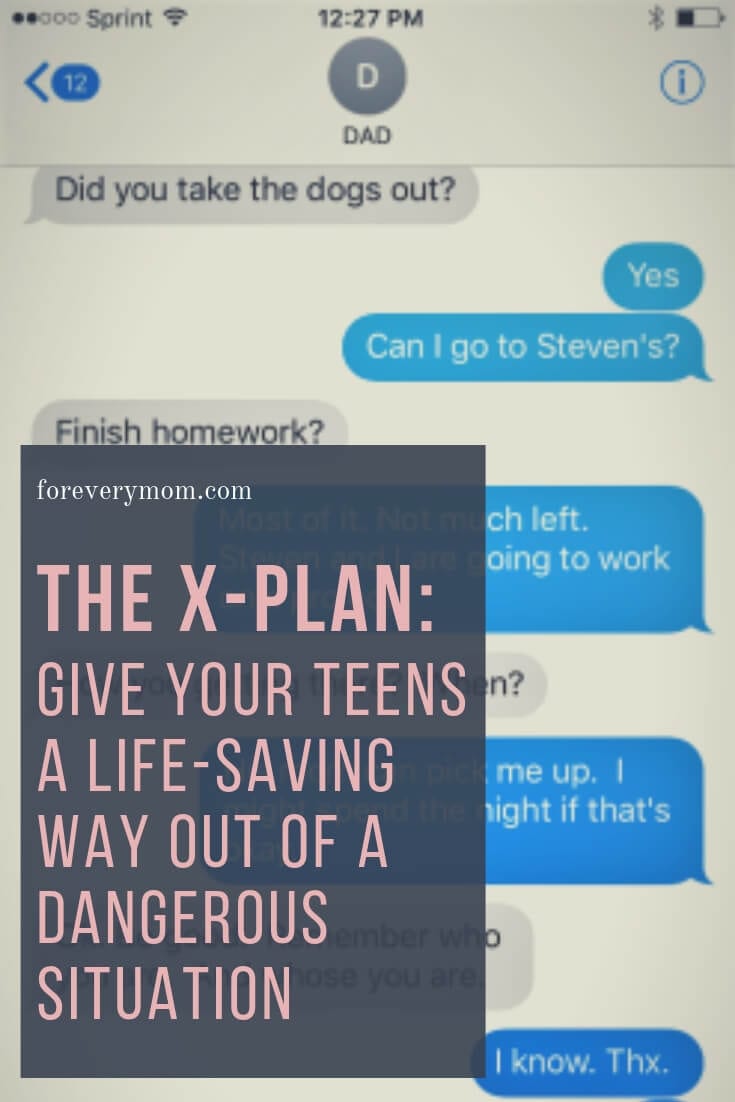 Friends, as most of you know, I get to spend an hour each week with a group of young people going through addiction recovery.  Yes.  Young people.  I’m talking teenagers who are locked away for at least six months as they learn to overcome their addictions.  I’m always humbled and honored to get this time with these beautiful young souls that have been so incredibly assaulted by a world they have yet to understand.  This also comes with the bittersweet knowledge that these kids still have a fighting chance while several of my friends have already had to bury their own children from being in a dangerous situation.

Recently I asked these kids a simple question:  “How many of you have found yourself in a dangerous situation where things started happening that you weren’t comfortable with, but you stuck around, mainly because you felt like you didn’t have a way out?”

They all raised their hands.

Every single one of them.

In the spirit of transparency … I get it. Though in my mid-forties, I’m still in touch with that awkward boy who often felt trapped in the unpredictable currents of teenage experiences.  I can’t count the times sex, drugs, and alcohol came rushing into my young world; I wasn’t ready for any of it, but I didn’t know how to escape and, at the same time, not castrate myself socially. I still recall my first time drinking beer at a friend’s house in junior high school—I hated it, but I felt cornered. As an adult, that now seems silly, but it was my reality at the time. “Peer pressure” was a frivolous term for an often silent, but very real thing; and I certainly couldn’t call my parents and ask them to rescue me. I wasn’t supposed to be there in the first place. As a teen, forcing down alcohol seemed a whole lot easier than offering myself up for punishment, endless nagging and interrogation, and the potential end of freedom as I knew it.

this …
For these reasons, we now have something called the “X-plan” in our family. This simple, but powerful tool is a lifeline that our kids are free to use at any time.  Here’s how it works:

Let’s say that my youngest, Danny, gets dropped off at a party. If anything about the situation makes him uncomfortable, all he has to do is text the letter “X” to any of us (his mother, me, his older brother or sister). The one who receives the text has a very basic script to follow. Within a few minutes, they call Danny’s phone. When he answers, the conversation goes like this:

“Danny, something’s come up and I have to come get you right now.”

At that point, Danny tells his friends that something’s happened at home, someone is coming to get him, and he has to leave.

In short, Danny knows he has a way out; at the same time, there’s no pressure on him to open himself to any social ridicule. He has the freedom to protect himself while continuing to grow and learn to navigate his world.

This is one of the most loving things we’ve ever given him, and it offers him a sense of security and confidence should he encounter a dangerous situation in a world that tends to beat our young people into submission.

However, there’s one critical component to the X-plan:  Once he’s been extracted from the trenches, Danny knows that he can tell us as much or as little as he wants … but it’s completely up to him. The X-plan comes with the agreement that we will pass no judgments and ask no questions (even if he is 10 miles away from where he’s supposed to be). This can be a hard thing for some parents (admit it, some of us are complete control-freaks);but I promise it might not only save them, but it will go a long way in building trust between you and your kid.

(One caveat here is that Danny knows if someone is in danger, he has a moral obligation to speak up for their protection, no matter what it may cost him personally.  That’s part of the lesson we try to teach our kids—we are our brother’s keeper, and sometimes we have to stand for those too weak to stand for themselves.  Beyond that, he doesn’t have to say a word to us.  Ever.)

For many of us parents, we lament the intrusion of technology into our relationships. I hate seeing people sit down to dinner together and then proceed to stare into their phones. It drives me nuts when my kids text me from another room in our house. However, cell phones aren’t going away, so we need to find ways to use this technology to help our kids in any way we can especially when they are in a dangerous situation.

I urge you to use some form of our X-plan in your home for any kind of dangerous situation. If you honor it, your kids will thank you for it. You never know when something so simple could be the difference between your kid laughing with you at the dinner table or spending six months in a recovery center … or (God forbid) something far worse.

Prayers for strength and compassion to the parents out there as we all try to figure this whole parenting gig out—it never gets easy.

I beg you to share this piece. If this somehow gives just one kid a way out of a bad situation, we can all feel privileged to have been a part of that.

Bert Fulks
A former educator (World History and Psychology) with stints in property investment, management, and marketing, Bert now splits time as a writer, speaker, and musician, while also managing his wife's veterinary practice.   He is founder and co-director of Empty Stone Ministry, a non-profit that specializes in camps, retreats, and small group events.  Bert and his family live in West Virginia where they share their passion for travel, the arts, sports, the outdoors, good books, and new adventures. You can follow Bert at his blog BertFulks.com