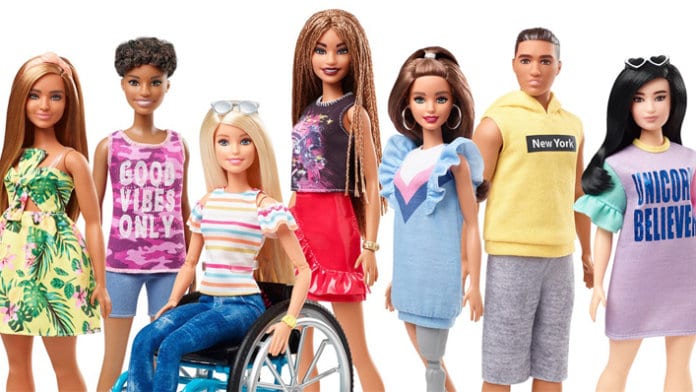 Barbie sure has come a long way in the last 60 years! The once thin, blonde, high heel-wearing doll is no longer the standard as Mattel aims to be more inclusive than ever.

This week, Mattel announced it’s latest collection — set to hit store shelves later this year — and it may just be their most brilliant idea yet!

The brand’s Fashionista line will debut this fall with Barbies who have different braided hair textures, additional body types and disabilities. The collection will feature a doll with a wheelchair, along with another doll who has a prosthetic leg. They also plan to include a Barbie who has a different physique of a smaller bust and more defined arms.

Our daughters deserve more than the superficial doll that’s been the market standard for decades, and Mattel is here to deliver. They continue to set a trend of embracing different body types and empowering girls to see themselves within the dolls, rather than pressuring them to live up to an unattainable standard.

“We’re always looking to expand our line to be more inclusive,” Mattel’s Vice President of Barbie Design Kim Culmone told TODAY. “We’ve made great progress and we know there is still work to be done, but we want to offer more options for kids to see themselves represented within our product line.”

The newest Barbies are inspired by fans’ overwhelming requests to see more dolls that look just like them.

“Barbie has the power to be part of the cultural conversation around beauty. By including diverse looks and representation of physical disabilities into our fashion doll line, we can further showcase the importance of diversity and inclusion to the kids who play with Barbie,” Culmone said.

What’s better is that Barbie isn’t just making dolls with disabilities. They’ve partnered with the UCLA Children’s Hospital to do extensive research and make the dolls as relatable as possible.

Designers at Mattel turned to 13-year-old patient Jordan Reeves, who has a prosthetic arm, for input on their newest creation.

“Hearing feedback firsthand from experts and people who live with physical disabilities was a priority for us and extremely important. Our intention was to capture as many details as possible to create a relatable experience,” Culmone said.

It was Reeves who suggested that the doll with a prosthetic leg should have a removable limb, as it would make the Barbie more realistic.

“We wouldn’t have known that if we didn’t work with her. We were honored to have both parties involved to bring kids a real representation they will enjoy and play with,” Culmone said.

Though the new dolls won’t debut until later this year, Culmone says it’s important for all Barbie fans to know this is only the beginning of a new age for the brand.

“Our commitment to diversity and inclusion is a critical component of our design process and we are proud that today’s kids will know a different image and experience of the brand, and that’s progress,” she said.

Previous articleWhat Happened to Valentine’s Day?
Next article7-Yr-Old Writes Heartbreaking Note on Arm During School Lockdown ‘In Case the Bad Guy Got to Us’