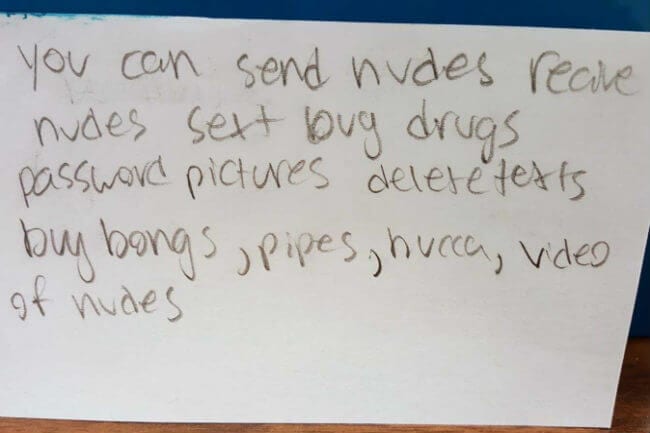 Oh, hey parents, it’s me again, back to write yet another article begging you not to let your kids have social media, or at the very least not let your kids’ social media accounts go unmonitored. I’ve said it before and I am sure I will say it again, I will keep writing these posts until I don’t have to anymore. But today, I have help from 9th grade science teacher Skipper Coates, who posted on Facebook about what her students said when she asked them to finish the sentence, “What my parents don’t know about social media:”. Coates’ post is now going viral, and it’s easy to see why. I’ll include her entire post below, because ALL PARENTS NEED TO READ IT! But for starters, let me give you this quote from her:

“Parents of the world, WAKE. UP. Your kids are living in a world that you are not invited to be part of. And they know how to keep you out.”

With photographic evidence, to back up her passionate plea, here are Coates’ own words about her students terrifying answers to “What my parents don’t know about social media:”

Working in a Junior High is really interesting. I see these little people in their most awkward and most emotional stage of life. I teach them science, but when I have time I try to squeeze in some life lessons and mentoring. But it doesn’t work if I’m not willing to really hear and understand their situations and problems. Lately, I’ve been really concerned about their mental health, bullying, and social media use.

Today I asked three of my classes to finish this sentence: “What my parents don’t know about social media is…” 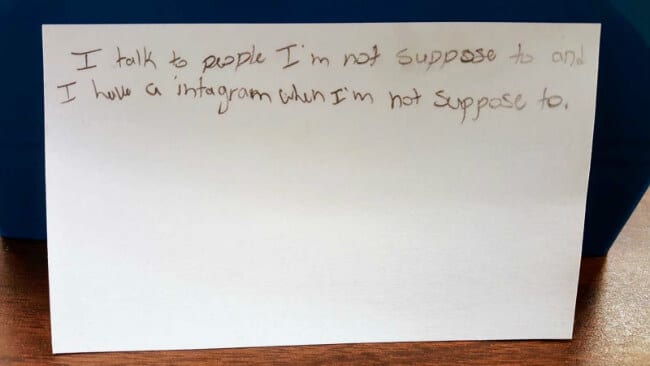 You guys. The answers were SICKENING. Heartbreaking. Depressing. 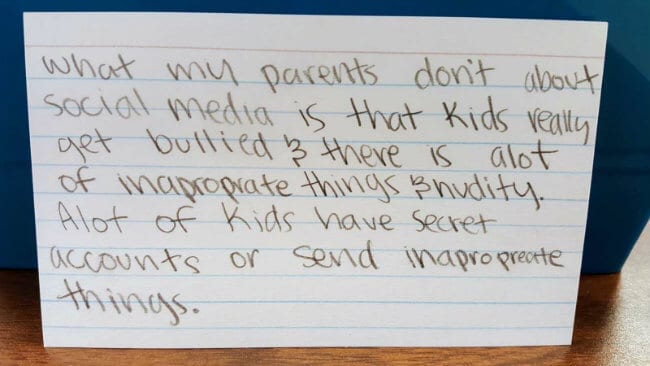 Parents of the world, WAKE. UP. Your kids are living in a world that you are not invited to be part of. And they know how to keep you out. Your teenager DOES NOT NEED a smart phone. 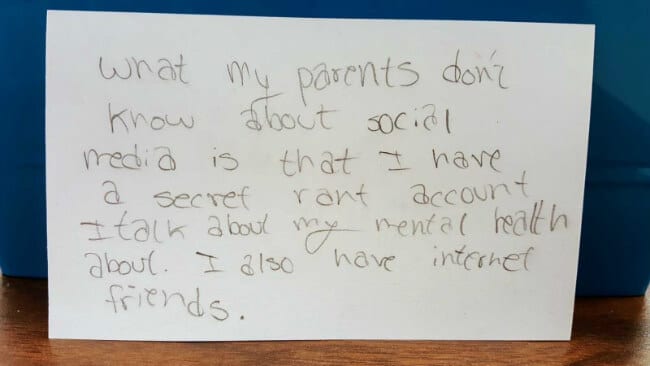 I asked 85 ninth-graders (ages 14-15) to finish the sentence. FIVE said they don’t have social media accounts. Five. All 85 kids have an average academic grade of an “A”… by all accounts they are “good kids.” 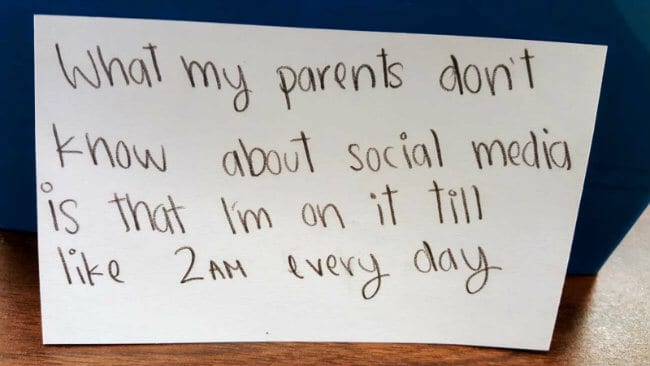 After her post went viral, Coates added to it in an article for Love What Matters, offering up some background as to why she chose to ask her students this question. She says that when she began teaching in 2004, teachers were only concerned about students texting during tests. As her career has paralleled the rise of social media, however, she says she’s seen a HUGE negative drop in the mental health of teens, and she strongly believes social media is a major culprit. Social media, she explains, makes “misbehaving” much easier and more dangerous for kids who don’t “understand the long-term consequences.”

“My husband is a Doctor of Behavioral Health, and I’ve often had talks with him about the increased use of social media in the classroom. For the first few years it seemed pretty harmless. But it slowly became a tool for kids to do the things they’ve always done. There have always been bullies, there have always been promiscuous teens, and there have always been those on the fringe who experiment with drugs. Social media quickly became a platform for all of this though. What could once be done privately, after school, is now happening before, during, after school, and in the middle of the night, and it’s being broadcast to an audience that doesn’t understand long term consequences.

I’ve been in the classroom for the introduction of Pinterest, SnapChat, Instagram, and Facebook Messenger. As I’ve watched this technology change I’ve seen a direct correlation to the happiness of the kids in my classes.” 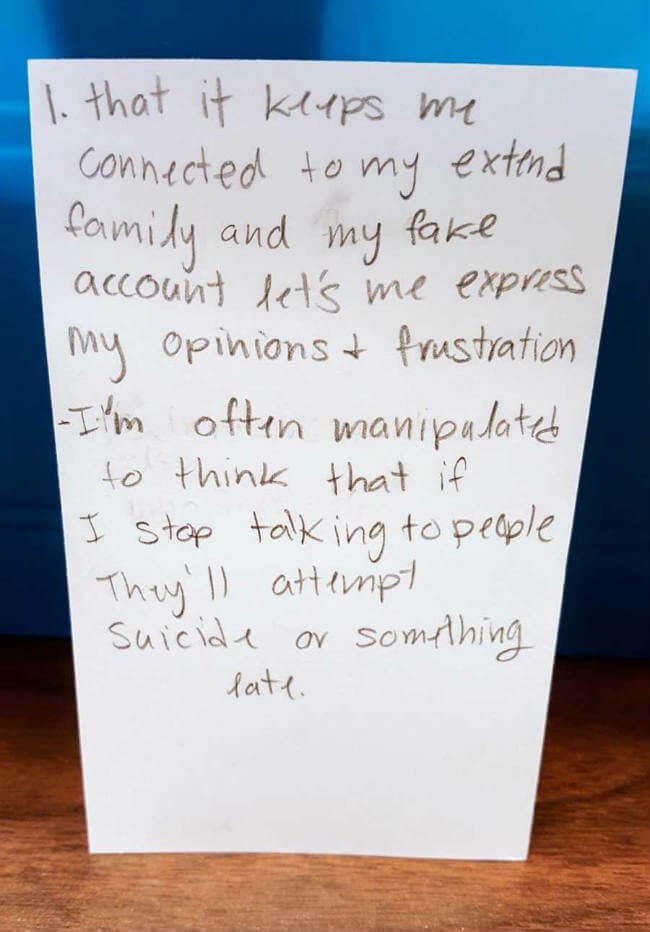 Coates’ experiment was a HUGE eye-opener for her. “I had no idea they’d be so honest,” she says. And it should be a huge eye-opener to parents as well. We simply CANNOT become complacent! Coates has something to say about that, too, begging parents to see what she learned from her students about their social media use:

“I took away two big ideas after I read their responses:
1) This is a problem that can’t be solved with more technology. We have to give them credit and recognize that they are incredibly clever when it comes to social media, and
2) No more talking about the dangers of social media. Just start talking. Period. These kids are looking for emotional outlets…for people who will not judge them when they make mistakes. We need to put down our own phones long enough to build face-to-face relationships so our kids don’t need to seek validation from peers and strangers.

Moms and dads, it’s not too late to take away the social media. Be BRAVE ENOUGH to do so if your kids already have it. But also? TALK to them. As Coates said…they NEED an outlet. And they NEED to know you aren’t going to judge them or fly off the  handle if they express something you’re not comfortable with. Be firm, discipline — YES. But also? Be open and LISTEN. You can be their CONFIDANTE without being their ENABLER. God has equipped you for this, parents! It doesn’t mean it will be easy, but if ANYTHING is worth the fight, worth going through the HARD…isn’t it our children??

I’ll leave you with these last words from Coates, to whom we ALL a  big “thank you” for her candidness and her warnings:

“As this post is going viral it is important to me that readers know how much I LOVE these teenage people. It is easy to be critical of the kids, of the parents, and of me. If you must comment, use this as an opportunity to show my students good digital citizenship. Be kind. Have compassion. In the coming days, I will be working closely with my school, community, and local therapists to learn more about how we can help.”

Parents, let’s work closely TOGETHER to see how WE can help our children, too! Their mental health may depend on it.

Dear Well-Meaning (But Ignorant) Parents: This Is What Your Teens Are Really Doing on the Internet