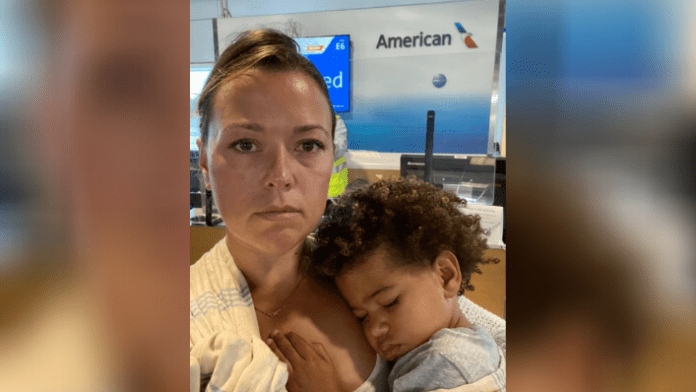 The internet is rallying behind a single mother from New Hampshire this week after she and her 2-year-old son were kicked off of a plane because her toddler would not wear a mask.

Rachel Starr Davis took to Instagram with the experience on Thursday:

“I’m at a complete loss of words,” Davis wrote, sharing a photo of her teary-eyed-self, holding her sleeping toddler at the terminal.

Davis explained that she snapped the photo after bawling her eyes out as she was forced off of her flight home to New Hampshire because her 2-year-old son, Lyon, would not keep his mask on.

“I tried repeatedly, begged him, bribed him, pleaded with him, did everything I could while he was screaming and crying as I tried to hold him and put the mask on, feeling my absolute lowest of lows as a mother,” she wrote.

Davis says that before she even sat down in her seat, “flight attendant Terry” was out for blood. She asked Davis how old her toddler was before then demanding that he wear a mask, as per the airline’s policy. Davis explained that this was their fourth AA flight this week and her now overly-tired 2-year-old had not been required to wear a mask for any of them.

“As I tried to put down my things and get a mask out, I heard Terry on the phone saying ‘yea it’s clear there is going to be a problem and we will need you to come down,’” Davis wrote, adding that Terry had a nasty “smug look” on her face.

Desperate to get home after an awful week away, Davis says she tried everything to get her son to cooperate and appease the flight staff. But nothing worked.

“I’ll save you the rest of the horror that happened on the plane, as I continued trying to get him to wear the mask, bawling my eyes out and hyperventilating behind my own suffocating mask,” she continued. “He would have been asleep before we even pushed back if they had just been humans.”

“The pilot had the final say, Lyon wears the mask or they will escort us off the plane.”

It’s 2020 people, and while there’s this completely bizarre ongoing debate over masks, there’s a very big difference between a grown man refusing to wear a face covering, and an exhausted 2-year-old.

A little bit of grace and understanding for a tired single mother would have gone SO far in this situation. But instead, Terry insisted on making things as difficult as humanly possible. For what? To stick to a policy? To ensure safety? At what cost?

Davis said that instead of escorting an sobbing mother and her son off of the plane, the flight crew made everyone de-board, and then would not let her and Lyon back onto the flight home.

“Apparently before we got off the plane everyone who left before us lit up the crew in the gate area,” Davis said, adding that she also lost it on the captain in her “absolute worst moment.”

The airline moved Davis and her son to a flight later that night—on the same airline that kicked them off the plane in the first place, “because my two year old son wouldn’t keep a mask securely over his nose and mouth at all times.”

Friends, this isn’t a mask problem. This isn’t a misbehaving child problem. 2020 has been a year full of unknowns and pivots. It’s been overwhelmingly hard on most adults, so may we not forget how difficult this has been on our kids?

In a time when anger and debate and constant change is fueling our day-to-day, can we not all agree that a little compassion and a whole lot of grace might just save humanity?

In a follow-up post on Sunday, Davis says she’s been overwhelmed by the response she’s received.

“The outpouring of support and compassion we have received has been remarkable,” she wrote.

“Thank you to those who see the impossible situation I was trying to handle, under severe stress and exhaustion,” she continued. “Thank you to every person on that plane who stood up for us when you saw what was really happening. Only the people on that flight can understand exactly what happened, and how poorly it was handled by the crew.”

“No mother should ever feel the way I felt on that plane. No nana should ever feel the way my own mother felt in that moment either. If you know us in real life, you know that we lead with respect, love and compassion. We don’t think we are above the rules, and we were doing our best to do as we were demanded in that moment. The situation was against us before we even knew what was happening.”

Davis closed her post encouraging others to spread love, show compassion, and ask God for discernment and direction in these unprecedented times.

“If we all led with our hearts and a listening ear, this world would look so much different right now.”