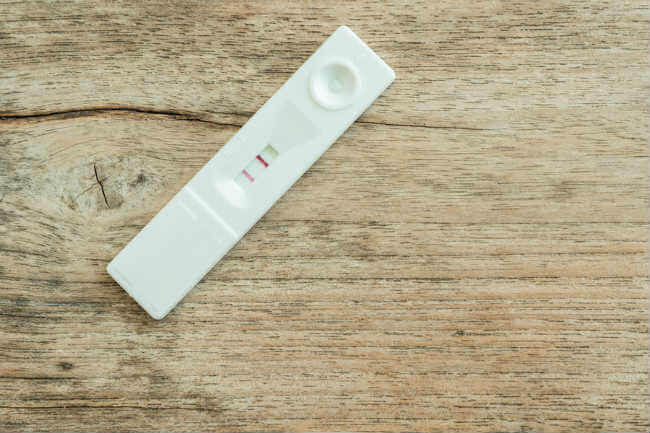 I Thought I Never Wanted to Be a Mother. And Then—Two Pink Lines

“There’s a pink line!” I called out through the closed bathroom door.  “One or two!?” my friend Katie shouted.  “Two.”  Dazed, I went to the door and opened it, feeling numb.  This was surreal….bizarre.

I fought through the haze of exhaustion in my mind, trying to remember the past few months.

When had I even seen my husband?

I had limped, then crawled, to finish the spring semester, straining under the weight of a load and a half of courses while working.

I had pulled all-nighters and periodically spent my last dime on espresso.

I could barely take care of myself.  How could I be having a baby?

Now it was summer.  I wanted to lose the weight that had been piling on and attaching itself to my usually-slender frame.  I wanted to relax with friends and lie by the pool and be carefree and nonchalant again and get my life back.

I did not want to be pregnant.

It wasn’t just that I didn’t want to be pregnant then.  I wasn’t sure that I wanted to be pregnant ever.  My husband, Dave, and I hadn’t ever really talked about it.  We had been having too much fun and were too preoccupied with trying to figure out how to be grownups.

At home the next night, I unceremoniously presented him with a gift bag.  He pulled out the tissue paper to find the pregnancy test.  I don’t remember what he said, only that he held me close for the next two and a half hours in our tiny dark living room as I heaved with sobs that came from the depths of my soul.

As the baby in my family, I had not grown up around babies.  I wasn’t a teenager who liked to babysit.  It was a world that I knew nothing about.  I only had one friend who had become pregnant so far, and she lived states away. In those early months, seeing my enlarging abdomen and feeling those first flutters of life, I felt that an alien life form was taking over my body.  I had not invited it in.  Where had it come from? I watched in horror as my body swelled and ballooned out of control.  I had to turn away when I woke up one morning and saw that stretch marks had violently marred my belly, leaving me looking as if I had been clawed by a wild beast.  No more bikinis.  I was only 23.

I hadn’t had much time to wear them at all, I thought.

The delivery was scary.  My first major surgery was a C-section.  The first few days at home were awkward and uncomfortable.  Yet slowly I learned to sift through the myriad of advice that was constantly coming at us. I learned to shut out all of the voices clamoring for my attention and to choose what worked for us.  I made terrible mistakes, but I learned to pick myself up and keep trying.  I learned that my baby had a reason for every cry, and I learned what each one meant.

I don’t know the exact moment when I truly became a mother.  Maybe it was one of those times toward the end of my pregnancy when I felt the baby move and shock and dread were replaced momentarily by a flicker of hope, a glimmer of joy, and a surge of expectancy.

Maybe it was when I sat in the wheelchair, looking out through the big glass sliding door of the hospital on that glorious sunny day with little bits of snow flying about, watching my husband trying to wrestle the car seat into the back of his sports car so we could drive the baby home.  (I remember thinking, “He doesn’t have a clue what he’s doing and neither do I, but my God, I would follow that man anywhere.”)

Maybe it was on the walks, the miles and hours of walks up and down the sun-dappled, tree-lined streets, when I would look down at the stroller and see the clouds reflected in her eyes. Or one of the cozy summer mornings at home, snuggling her close in a blanket once life had really slowed down.

Perhaps it was even years later, when my husband again held me while I sobbed in his arms for hours on our same white couch in our same tiny darkened living room—although this time I was sobbing after putting her to bed and kissing her goodnight on the top of her sweet head. This time I sobbed while asking myself, how could I ever have not wanted her?

I have cried a lot over the years, in some seasons more than others. Now she is twelve and all summer I have cried a lot.  I let my husband sleep, and late at night I curl up into a ball on top of the closed toilet lid under the harsh fluorescent bathroom light and I cry. It’s a ragged cry that fights its way up from someplace deep inside. At the beginning of the summer I snapped a photo of her one evening at the park.  She is stretched out face down on a wooden step next to the water, gazing into its depths while the last rays of sunlight play across the top of the river and pick up the blonde highlights in her hair. That night after she went to bed, I clutched that photo to my chest and sobbed.  I did the math.  She is twelve. Six more years of having her in my house.  Too fast. It goes too fast. The realization rips at my soul.

Twelve is such a tender age.  She loves animals.  Last week we drove up the mountain to the animal shelter to visit and walk the dogs.  As the car wound around the roads that were sprinkled with sunlight (it always seems to me that it is sunny when she is nearby), she shared with me about something that had happened recently.  She was at a sleepover when her friend started gushing about the big birthday party, the party of the summer, and how much fun it had been.  The friend said, “You were there, right?” and my daughter had to explain that she hadn’t been, that she wasn’t invited.  “Mom, how could she not even know that I wasn’t there?” she asked.  I said something soothing and the conversation moved on.  But that night found me once again huddled on top of the toilet hunched over sobbing.  In all of my awkward growing up years, I don’t think I ever cried over not being invited to a party.  But I cry for her.  For all of the hurt that I can’t heal for her, and for how hard and confusing and messy this life really is.

I look back on the naïve, immature 23-year-old girl that I was once.  I think that girl somehow knew how motherhood would stretch her heart and cause it to swell and heave and to scar beautifully again and again.  Maybe that is why I thought then that I never wanted to be a mother.  Maybe that’s how I know that I already was one.

Previous article5 Things You Should Know About Online Degrees
Next articleOh, the Places You’ll Go, My Son

Helen Gentry
Helen Gentry writes and blogs from her mountain home in North Carolina where she lives with her daughter, husband and two rescue dogs. Passionate about helping women to reach their full potential, Helen is currently a full-time graduate student studying to become a counselor and a coach.  When she is not writing, doing homework or parenting, she can be found dabbling in trail running, hiking, photography, and farm-to-table cooking.  She drops everything for a mountain sunset or a good cup of coffee.