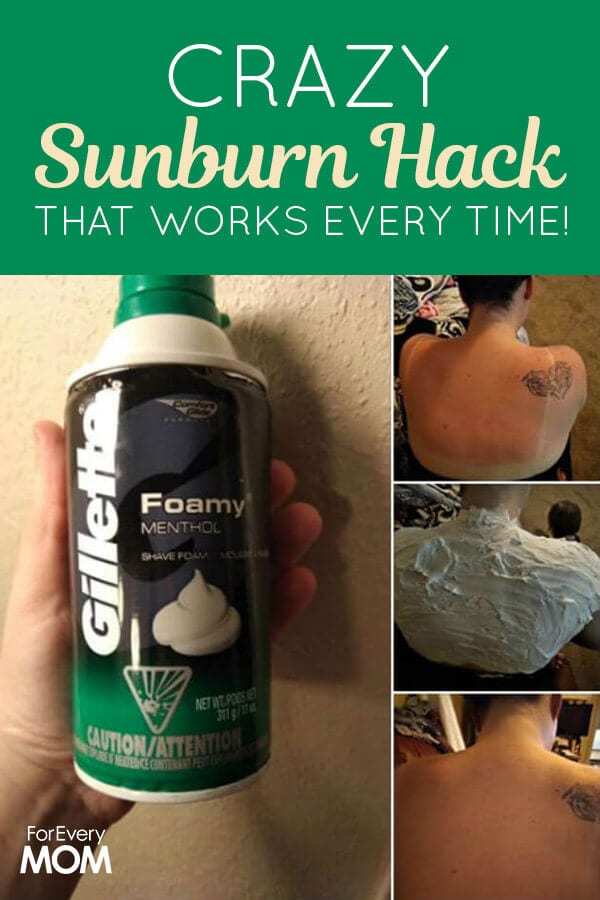 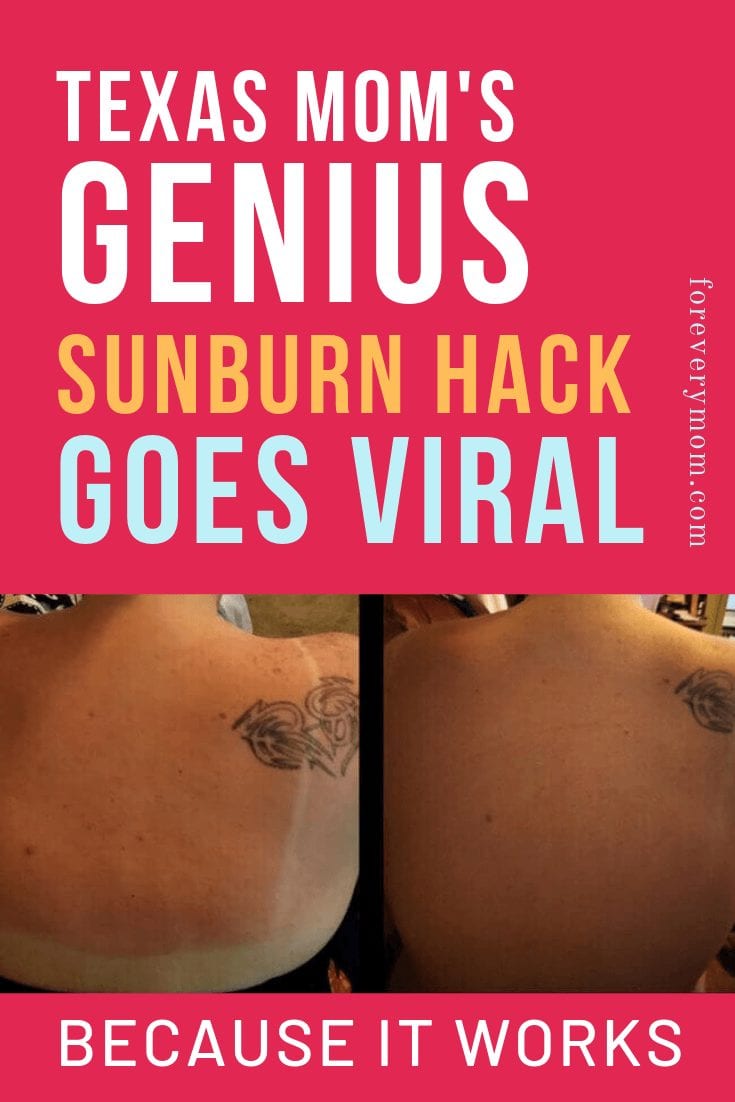 Texas mom Cindie Allen-Stewart just thought she’d be helpful two weeks ago when she shared her favorite sunburn hack on her Facebook page. She had NO idea that her simple tip would soon go viral to the tune of 232,000 shares and countless news stories. It seems that, like Cindie, people who are prone to sunburn in the summer even when they use sunscreen (myself included) were looking for a sunburn hack to ease their pain. Turns out, even dermatologists agree that Allen-Stewart’s hack works. Her secret? Menthol shaving cream!

According to Cindie, that foamy white stuff guys put on their face every day will soothe your sunburn, taking out pain and redness, in about 30 minutes. Although I hope I don’t get burnt bad enough to need this sunburn hack, I sure am glad I know about it! 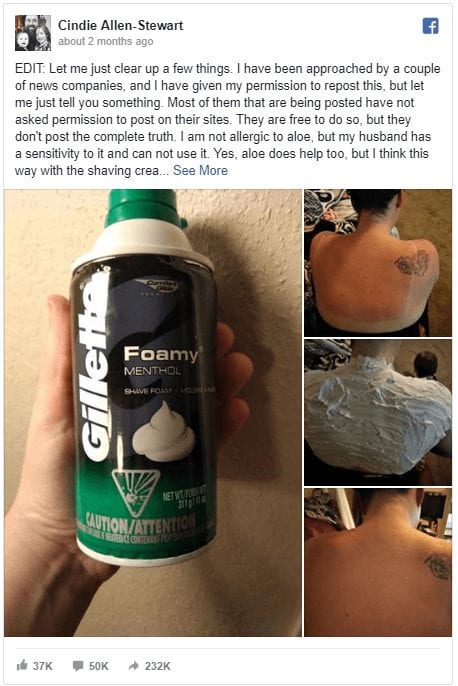 If you’re like me, you hate getting sunburned. No matter how much sunscreen you put on, some people just burn anyway. I recently told a friend about a sunburn treatment that works wonders! She told me she had never heard about it, so I figured I’d make a post because I was sunburned recently. Usually, it takes just a couple days from start to finish, but this takes the heat out of it fast and makes it more comfortable on you.

I found out about this from my husband. His mom used to do this to him when he ended up with a sunburn.

First, buy you some Menthol foam shaving cream. It has to be the foam and it has to have menthol in it. We found Gillette shaving cream on Amazon since we had problems finding menthol foam in stores. We ended up buying 6 cans of it, but it works out because we live in Texas and sunburns happen a lot. (Plus, we have given a couple cans to friends.)

Next, apply the shaving cream on the burn. It may seem like it’s a strange shaving ritual, but trust me! Don’t rub it in, just let it sit on your skin. It will start bringing all that heat out (you’ll be able to feel it). You may feel like you are itchy too, but that’s a good thing! Itching means healing.

Then, after about 30 minutes, the shaving cream will seem like it has dissolved in spots. It will seem like it’s not as moist and a little dried out. You will feel as if you’re becoming a little cold, at least on the sunburned part of your body. THAT IS A GOOD SIGN!

Next, rinse it off in a lukewarm or cool shower or bath. It’s just to get the residue off.

Finally, if you still need it, do it again the next day. Usually after that second treatment, the sunburn disappears.

The pictures show my treatment. The final picture was taken the third day after my sunburn. I slept great after the first treatment and when my shoulders still felt hot from the burn the next day, I had another coating of shaving cream on just my shoulders. I have not had any peeling either. I use this on my kids too!

EDIT: OK, I was not expecting to find almost 5,000 shares in just a day. I was actually just posting for friends, but apparently, a lot of y’all find this at least interesting! I love this method and especially appreciate it because I don’t have to sleep with a sticky substance under a shirt (which I think is uncomfortable).

And one more thing, I don’t normally post publicly, so please don’t send me friend requests unless I know you from somewhere. I’d appreciate at least a note saying where that is.

I appreciate everyone’s comments as well! I have tried so many methods of sunburn care, and this is by far the best I’ve found thanks to a sweet mother-in-law.

EDIT: I do read comments as I can and noticed a trend in many comments. In the 10 years I’ve known about this, I’ve never felt as if the menthol burned on my skin. It has always felt very cooling instead. My mother-in-law actually learned of this from a doctor about 40 years ago. She thought it was crazy then too until she saw it in action.

I’m not saying to go out and do this, I was just showing my friends what I do. I never expected to get this much attention. I guarantee that all three pictures are me and this is MY result each time.

I’ve been asked about tanning with this method. My skin isn’t the greatest at tanning. I normally burn and return to white. However, sometimes, if a tan happens, I tan for about a week before returning to white. That’s my skin. Everyone is different. I would think it wouldn’t hurt the tanning.

My husband can not use aloe. He has said it feels like acid on his skin. There are people with an allergy to aloe. I have used aloe myself and it does soothe. However, I love this method because it works so fast. Seriously, lather, wait 30 minutes, rinse. The next day reapply on stubborn parts if necessary (and it’s not always necessary), wait 30 more minutes, rinse, and done!

I’ve also used Noxema. I hated it because I would have it all over and sleep in a shirt that just stuck to me at night and wouldn’t be comfortable. I’m not saying it doesn’t work, but I’d rather not be sticky at night when I’m trying to sleep.

PSA: Please remember to always use sunscreen! Too much sun exposure can be dangerous and lead to cancer. By no means am I endorsing going out without sunscreen! I burn with sunscreen as well and know of the hassle, but it is worth it to wear it!

After her sunburn hack post began to go viral and was picked up by several news websites, Allen-Stewart DID feel the need to clarify some things. She edited her post to say:

EDIT: Let me just clear up a few things. I have been approached by a couple of news companies, and I have given my permission to repost this, but let me just tell you something. Most of them that are being posted have not asked permission to post on their sites. They are free to do so, but they don’t post the complete truth. I am not allergic to aloe, but my husband has a sensitivity to it and can not use it. Yes, aloe does help too, but I think this way with the shaving cream is a lot faster.

Also, I am not saying it has to be Gillette. That’s just the brand that I happened to have on hand. It just has to be a MENTHOL FOAM shaving cream. Not gel! It can be any brand as we’ve used multiple brands and had the same result.

Lastly, it’s not just 30 minutes and done. It’s 30 minutes, rinse. The next day, if you still feel hot areas of a burn, reapply. Then wait another 30 minutes and rinse. It will look as if it’s dissolved and dried out a bit. That’s just how the shaving cream is. It has nothing to do with the burn, it just gives you a visual idea of what 30 minutes would look like. It still takes a day after the last application to show you a significant difference.

I stand by this method. If you want to try it, go for it! If not, that’s fine too! I just figured I’d help my friends out a bit to show them the way I use. I have used it for about 10 years and have never had an issue with it. I always get the same result.

I must admit that I’ve never heard of this sunburn hack before. I burn very easily, even with sunscreen, and I am definitely going to give this a try next time I have a sunburn.

In their coverage of the story, Fox News reported that dermatologists do agree that this sunburn hack works.

Dermatologist Lauren Eckert Ploch, who works at the Georgia Dermatology and Skin Cancer Center, told Fox News that the menthol in the shaving cream is what eases the pain and redness associated with sunburn.

“[These] products cause a cooling sensation on the skin and can also numb the skin to pain,” Ploch told Fox News. She also added, however, that menthol-containing shaving cream or other products should NOT be used on sunburns that is blistering or peeling,  because it will cause irritation, hurting instead of helping.

Ploch, of course, also cautions that sunburn is “completely avoidable” and says if you’re going to be in the sun, you should wear sunscreen AND UV protecting clothing.

But, for those of us who will slip and get burned this summer, it’s nice to know there’s a quick, soothing remedy in the bathroom cabinet, right? Thanks, Cindie, for sharing your sunburn hack!

How to Build Trust and Create Connection with Your Child