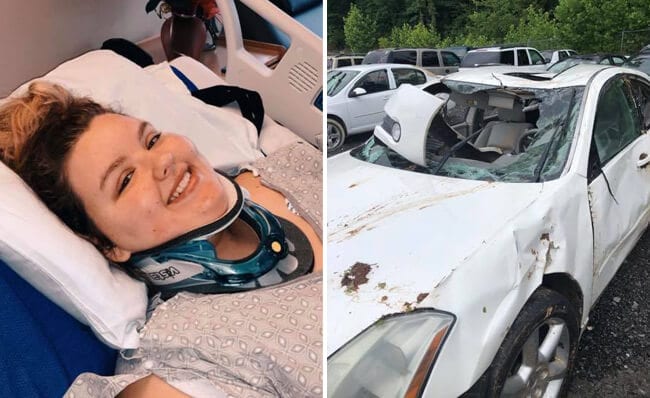 A North Carolina family is crediting Apple’s Find My Friends app this week for saving their daughter’s life.

[As] any mother would, Catrina Alexander said she began to worry after her 17-year-old daughter, Macy Smith, hadn’t answered text messages or returned phone calls after missing curfew on June 7.

Little did she know, Macy had been trapped, alone in her crashed car for almost seven hours.

Alexander remembered a time last year when she and Macy had agreed to share their location with each other. In an attempt to connect with her daughter, she opened up the Find My Friends app on her iPhone to track Macy’s location.

It ultimately led her to the 25-foot embankment where Macy was trapped under her vehicle.

“Having that location, if we didn’t have that, we would have never known where to look,” Alexander told WSOC-TV 9. “I’m certain that that is what saved her life.”

While driving near Pilot Mountain, about 26 miles north of Winston-Salem, her car hydroplaned before rolling three times into a woodsy ditch. She was hidden from view for hours.

“The first hour, I was frantic,” Macy said. “I was looking for ways to get out and I was thinking of just different things I could do.”

Having been pinned down by the smashed up vehicle, Macy was unable to find her cell phone. She says the only thing she was able to touch was her Bible.

“Since the second I laid my hand on that Bible, I knew that that was God telling me that it was all in His hands and it was happening for a reason and that I would be OK,” she said.

Macy says she prayed harder than she’s ever prayed before.

“I will never forget the sound of my family calling out my name when they found me around 10:30 pm,” Macy wrote on Facebook.

Up until that point, she said she hadn’t allowed herself to cry. But when she heard a car door shut and her stepdad leaned over to hold her hand through the sunroof, she finally let it all out.

“I just couldn’t hold it in anymore,” she said.

After her mom called 911, Macy was taken to the hospital with a fractured neck and complete nerve damage in her one arm, which she can no longer feel.

Almost 24 hours ago I was lying in a ditch 20 yards off the road for the 7th hour with my arm pinned under my car. I…

“I do not deserve to be here right now, but God has bigger plans for me,” she says.

Macy knows that most teenagers don’t love the idea of their parents tracking their every move. But having been through this experience and knowing that the tracking app in her phone quite literally saved her life, Macy says she’s now on a mission to spread the word.

“I definitely feel like God spared my life for a reason,” she said. “I want to share my message because teenagers need to hear it from me. If you had been through what I’ve been through you would never say that you didn’t want that app.”

The family says they’re now using the Life360 app which has more features than Find My Friends. They know better than anyone, you never know when it could mean the difference between life and death.