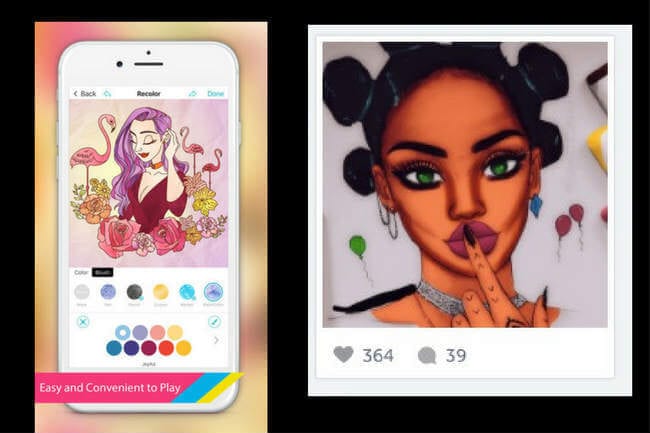 Parenting in the age of social media is NO JOKE. As I’ve stated numerous times in articles, we are facing a world that requires parental vigilance on a level that no other parents have faced. Our own parents could not have prepared us for this; dare I say it? Compared to us, they had it easy.

Dangerous apps that market to kids are EVERYWHERE, and the latest culprit, the Recolor app, is particularly treacherous.

Why? Because it looks like good, clean fun. Sadly, it’s anything BUT. 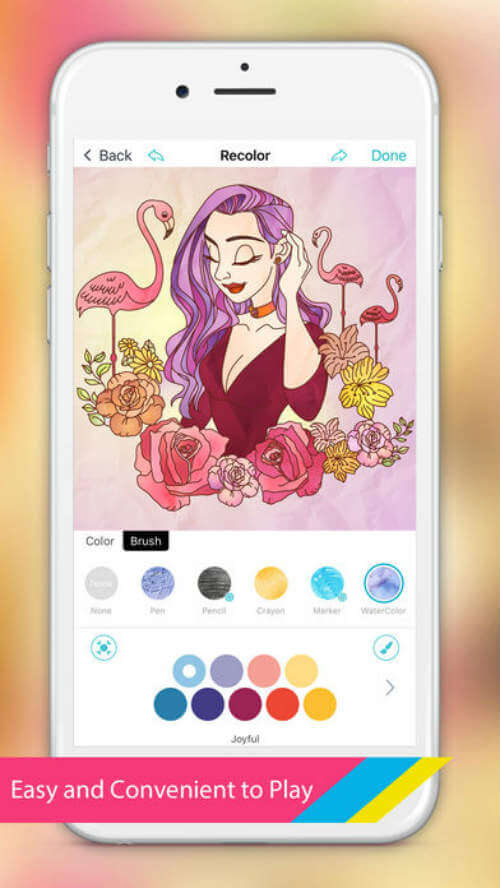 I had no idea what the Recolor app is (and I consider myself pretty vigilant!) until a concerned parent emailed me about it (THANK YOU, Angela from Connecticut!) urging me to check it out for myself. So, I did, and I found out that Angela was NOT wrong to be sounding the alarm. In fact, she was doing you and me a big favor. Let me explain.

The Recolor app is a popular coloring app that has been around for years and has a 4-star-plus rating (out of 5) on both iTunes and the Google app store. When it started, it was marketed as a mobile adult coloring book, but NOW it is rated for ages 9+. So parents may see the ratings on the apps stores and think, “Wow, nice coloring book app for kids! Has really high ratings!” and download it for their kids without hesitation.

THIS, parents, is precisely why you need to read APP REVIEWS! There are now MANY hero parents as well as non-parent users leaving vigilant reviews since Recolor has made changes that allow comments and messaging. Basically, the Recolor app has gone from a coloring app to a platform for anonymous communication with strangers and of course, a nice side of SOCIAL MEDIA BULLYING. Also, there are tons and tons of user-uploaded sexually suggestive photos that users can see. So your 9-year-old could see some pretty racy stuff on Recolor. Or, better yet, be SENT some racy stuff from a complete stranger.

Need more proof? Allow me to copy and paste some reviews for your reading pleasure:

“I have had this app, full version, for a few years. It is definitely the best coloring app. The import quality is the best of all the others, the crayons-once figured out- are great!
What is disheartening is the social aspects. When I first started comments were NOT a part of the app, I often wished I could just tell a recolorist just how much I did like their work! Then it was added. But now children, and I’m sure some adults, have abused that privilege.

Kids, 9-teens, are bullying each other, and anyone that doesn’t give them a “like” or “follow” them. There is way too much suicide conversation. Some say it’s for ‘awareness’, and I’m sure some don’t understand the difference in promoting it vs awareness of it. There have been details on how and where to cut yourself. One girl wrote a message, imported, claiming to be the mother of the recolorist and that her daughter had committed suicide. Now many saw it for what it was, but some believed it. Then the girl gets on later and basically days “psych!” And goes on like it was nothing…”

Parents! You will want to think twice before letting your child use this app. Kids are fooling parents who don’t let them use social media because Recolor allows for wide open chatting and posting selfies. There is a great deal of disturbing behavior from the kids – sexual role play, providing personal information to complete strangers, suicide and self harm posts, bullying, inappropriate and foul language, etc. Adults are openly sexting with children. And it’s all hidden behind a lovely and safe facade of a coloring book. The developers of this app are irresponsible and care only about the revenue your child is generating for them. They’ve been alerted of these issues for quite a long time and yet the app continues to evolve in this unhealthy and dangerous direction. DO NOT ALLOW YOUR CHILD INTO THIS ENVIRONMENT. “

I was a paying member for a long time but have recently canceled my subscription. Parents be warned this is being used as a social media app by children/tweens/teens as young as 8-9 mixed in with adult users. Unlike other social media apps there are no security controls preventing your child from interacting with adults and any other person that finds them or they find. I have seen inappropriate content, children giving out personal information, posting selfies of themselves, bullying others, talk and pictures depicting suicide and self-harm, and children interacting with adults. As a parent please know that your child may not be using this app as it was intended and you should review your child’s account and be warned about these concerns about this app.

Moms and dads, if your kids or teens want to color, get them some fancy colored pencils and a real, actual coloring book. The Recolor app, which apparently used to be pretty great when it was adults-only, has jumped the shark and now poses multiple huge risks to your children as users.

“Adults are openly sexting with children.” UMM, need I say more??? Recolor is a DELETE. Be vigilant and monitor your kids’ devices! It’s on us, moms and dads, whether we like it or not.

Previous articleSomeday We Will Have Nice Things. Today is Not That Day.
Next articleHey Kids! The More Time You Spend With Mom, the Longer She’ll Live