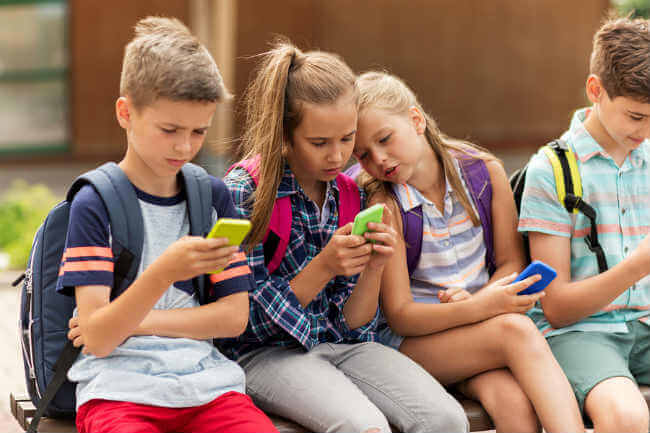 We’re getting ready to start a new year, which means there’s a very strong possibility that your kid just received a new mobile device or tablet for Christmas (mine did, but I am a mean mom so she’s not allowed to have Internet on it.) Because technology develops SO quickly, it’s difficult to keep up with the dangerous apps you should look for on your kids’ phone or device: it’s waaay beyond SnapChat now (though that one is still bad!).

So, if you’re new to this “my kid has a phone” thing, or even if you’re not, here are 6 MORE dangerous apps your kids might have that YOU need to know about.

This messaging app is very popular with teens and has a big focus on VIDEO and LIVESTREAMING which is super not good for impulsive teens or tweens who may lack the sound decision-making skills they will have in their early twenties. Your child could easily see something inappropriate on someone else’s video or send something live. It also features a “whisper” messaging designed to disappear; it’s features like these that kids use to get around a parent who checks their text messages. So, if your kid has BeeTalk, it’s a dangerous app, and you should definitely delete it.

Not to be confused with the “Whisper” messaging feature in BeeTalk, above, this is a completely separate dangerous app. It’s been around for a long time but many parents still don’t know about it, so I’m telling you again. Designed to be an anonymous confessional app, this also has disappearing messaging that parents can’t track, AND it encourages interaction with STRANGERS because posts are shared by your GEOGRAPHICAL location. Umm…NO THANKS! This is a big one your kids SHOULD NOT HAVE.

WhatsApp is cleverly named, and unfortunately dangerous. A lot of kids and adults use it for group chats and sending video, but once again, you can send un-trackable texts on this app and make un-trackable calls on it, so it’s one kids use SPECIFICALLY to avoid their parents’ watchful eyes. Also, if your kid is determined enough, there are plenty of tutorials on how to make fake screenshots and conversations on WhatsApp just to FOOL parents…so play it safe and just don’t let your kid have this dangerous app!

As I wrote earlier this year, Musical.ly is a fun app that lots of young kids use to create fun, silly lip dubs with friends. The problem is, it also has a messaging feature which makes kids vulnerable to predators, as this dad found out the hard way. You have to have your settings SERIOUSLY locked down, or kids can post publicly and post their locations, too. Plus, they can always see others’ inappropriate content AND see or get inappropriate COMMENTS on their own stuff and others. It’s fun, but it requires a TON of monitoring if you’re going to let your kids use it (and spoiler alert: they WILL survive without it if you decide it’s too dangerous.)

Ugh, this dangerous app is basically like Tinder for teens. HARD PASS on that one. Look, parents, we need to make sure our kids know that there are PLENTY of ways to meet people that DO NOT INVOLVE SOCIAL MEDIA. Yikes. Meet a real person, like, IN PERSON, at school, at church, by joining a club or youth group, etc. Bottom line: your underage child should not be using an app to meet “new people” (i.e. STRANGERS) in your area.

Eeek, this one actually DOES make me Flinch. It’s basically a dumb game that can turn into a cakewalk for predators. This app is a live staring contest between users. That’s right, your kid and another user face off via live video and facial recognition software decides who laughs or flinches first. Ummm…screenshots of your child’s face and a live video link to your child’s location? How about NOPE. Ix-nay on the inch-Flay!!

Ok, moms and dads, you know what to do! Go check those devices, and check them often! Be VIGILANT, and talk to your kids about WHY these are dangerous apps, too.Check out our older but still relevant expanded list for some of the original dangerous apps that kids still use, too.