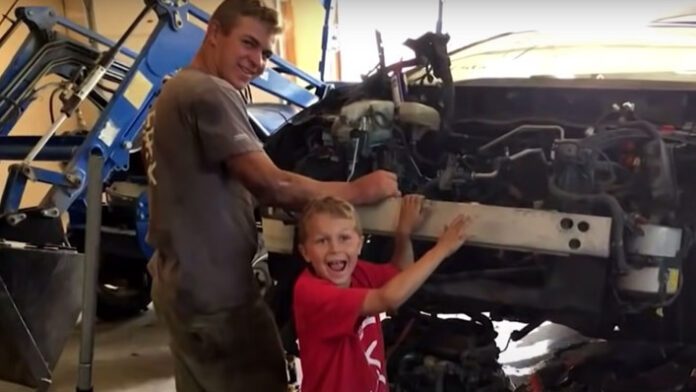 Every 8-year-old is remarkable, but not every child gets public recognition for his heroism. J.T. Parker is one such kid — who showed incredible bravery in a dire situation. J.T. lifted a car off of his trapped father. As he retells the story, J.T. says that “angels” helped him at that moment.

8-year-old J.T. jumped into action lifting a car off his father

J.T., his father, Stephen, and his brother, Mason (17), were working on a car in their backyard when the project took a tragic turn.

Stephen told East Idaho News, “We were pulling the engine out of the car, and after we got it jacked up, I climbed under there to take the axles off. The one axle came off pretty easily, but the other side wasn’t coming off.”

Mason had cut his hand and went inside to clean it up.

As Stephen was working on the last axle, he adjusted the jack. And, the car fell, trapping him underneath.

“I yelled to J.T. on the other side of the car, ‘Jack it up quick! Jack it up quick!’” Stephen recalled in the interview with EastIdahoNews.com. “I couldn’t move at all. I was totally trapped, and then I passed out. It was all in his hands, and I thought, ‘This is it. There’s no way he can jack up this car because it took my 17-year-old son and I both to jack it up the first time.”

J.T. quickly adjusted the jack and began to jump onto the jack repeatedly. His 50-pound body barely moved the jack handle. He recalled, “It was scary, and I didn’t think that I could jack the car up, but I just kept on trying.”

And, for the next 15 minutes, J.T. continued to jump on the jack handle. The car slowly lifted off of Stephen.

Janna Firestone
Janna lives in Northern Colorado with her husband and two teenage boys. You’ll often find her hiking, paddleboarding, or enjoying a good board game indoors. She's an unapologetic Dallas Cowboys fan, and an even bigger fan of coffee, dry shampoo, and authentic conversations.