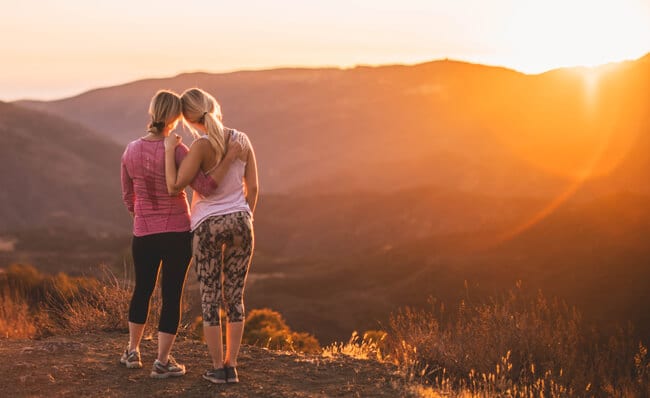 My Word for the Year: Allowing — What I Learned When I Surrendered My Kids to God

So, my one word for this year was “allowing.”

The bumper sticker lesson that embracing this word has taught me is this: less of me means more of God. Intellectually, I’ve known this to be true for decades. But a year of allowing things to happen just as they are has served to tattoo this wisdom on my heart. And all God’s angels said, “ Amen.”

Allowing is short for giving someone permission, aka, personally letting go of something or someone so a person named not me can do what needs to be done. As moms, the ultimate letting go is that thing we have to do with our kids, which is hard-o. Also, as moms, the most important Someone we can hand over full authority to when it comes to our kids and their world is God alone.

Intellectually, I’ve known this to be true for decades. But a year of allowing things to happen in my adult kids’ lives and giving God permission to do what He deems best has served to just about kill me. Oh, I meant to say, allowing God to do the things for my kids has inoculated my heart with necessary wisdom. And all of Shelby’s kids said, “ finally.”

The other bumper sticker lesson I know I’ll be learning until my final breath is this: you may think you’re in control but think again. Which really sucks straws sometimes. As moms, hands-off parenting is grueling. Having to trust God’s got things under control when everything around us appears helter-skelter can twist our mom heart into knots. If you’re like me, said knots can take years to unravel.

Which circles back to allowing in the first place. God gave us our children as precious gifts, on loan from the heavenly realms. He might know a thing or two about what He’s doing since He engraved them on the palm of His hand before He even knit them in our womb. Which means even the idea of us having to give God permission to care for someone who already belongs to him smells a lot pretentious. I know because I’ve worn this scent far too often—Vainglory, by Calvin Klein I think. Maybe you’re familiar.

The thing is, as hard as allowing is when it comes to motherhood, letting go is what we are intrinsically wired to do. It’s as simple as allowing the Holy Spirit inside us to guide, inspire, and console us throughout our journey. It’s as hard as allowing our humanness to get out of the way. But we do our best and get better at it over time.

We are wise to ponder the words of my friend, Whitney Lang Flemming, who says, “although holding on tight to our kids feels so good, I know that letting go is the most profound expression of love I can give.”She’s spot on because letting go is allowing God, and allowing God is allowing love to flourish.

But something else is also true. Letting go of our kids and allowing God to do what needs to be done is one of the most profound gifts of love we can give to ourselves as well. Allowing says, “I see in myself what God sees in me: a beloved child, worthy and able to steward a child on His behalf, full of courage and strength to trust Him to do what is best.”

Allowing is so hard, Mommas, and so worth it. When we let go, we are building up our kid’s confidence and self-worth, not to mention modeling a faith for them that allows uncertainty to exist. We wouldn’t even need faith if all things were certain, which they most definitely are not.

Just like food that needs to be seasoned, simmered, and rendered into form, we as Mommas learn to trust more through the experience or raising our kids—reducing our worry and sifting our fears with each instance of allowing along the way.

In light of these culinary and motherhood truths, I decided to share with all of you the recipe for one of the Spear family favorites. While making this delicious comfort food the other day, I couldn’t help but think about the concept of allowing. Maybe making this warm and fuzzy dish will give you something to ponder as well.

A version of this post originally appeared on ShelbySpear.com, published with permission.

Shelby Spearhttp://shelbyspear.com/
Shelby is a sappy soul whisperer, sarcasm aficionado, and pro-LOVE, Jesus adoring mom of 3 Millennials writing stuff & doing life with her hubby of 25 years. You can read her stories on her blog at shelbyspear.com, around the web, and in print at Guideposts. Shelby's new book, co-authored with Lisa Leshaw, is now available: How Are You Feeling, Momma? (You don't need to say, "I'm fine.")