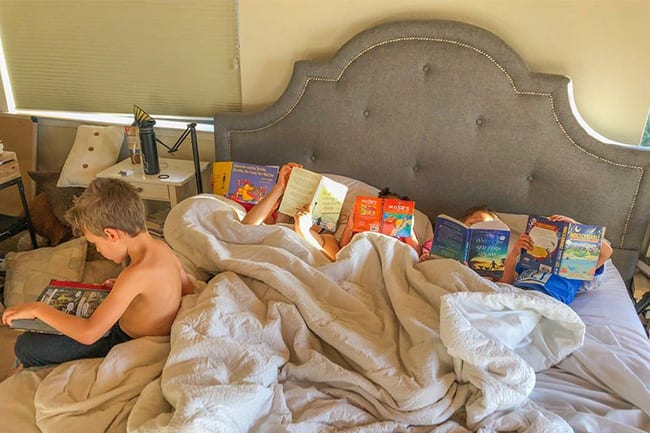 We’ve seen the warnings, and as parents, most of us are aware of the effects that technology and screen time have on our kids. Higher risks of anxiety and depression are just a few among the list of risks that come along with allowing a phone or a tablet to entertain kids throughout the day.

For Molly DeFrank, it wasn’t necessarily the AAP warnings or the plethora of studies that led to a technology overhaul, (though she was aware of them), but the sheer loss of childhood.

“One day when I got home after running errands, my kindergartener greeted me at the door with, ‘Can I play on your phone?’ DeFrank wrote on her blog. “Nope. That was the last straw. My husband and I decided that we needed a course correction”

In a now-viral Facebook post, the mother of five shared a glimpse into what a screen detox has done for her family.

“We did not stage this photo,” she wrote, sharing a picture of her kids and husband reading books in bed.

We did not stage this photo.

Months ago we removed screen time from our kids. Why? Because my precious babies were…

“Months ago we removed screen time from our kids. Why? Because my precious babies were acting like demogorgons. And Mama don’t play.”

DeFrank says that while they had only allowed an hour per day on any screen or device, the ripple effect of those 60 minutes was enough to radically transform her household in a negative way.

“The screens apparently muted their creativity, caused grumpiness, fighting and whining. I was not into it. So we pulled the plug, literally.”

DeFrank says that her kids protested “for a hot minute,” but to her surprise, moved on quickly from the technology overhaul.

The blogger says that what started as a 30-day screen detox has turned into a lifestyle overhaul in their household of five children under the age of ten.

DeFrank knows that while technology can be useful in its rightful place, the effects it had on her “babies’ behavior” called for a change.

“A few Saturdays into our screen detox, my kids woke up one by one and saw my husband and I reading in bed. They grabbed their own books and joined us.”

“At restaurants,” she continues, “they bring a stack of books instead of propped iPads. My daughter has grown five reading levels in seven months.”

DeFrank says her daughter is reading through books faster than she can buy them, while her son has come up with the idea of teaching family art classes.

“Apparently the ‘go play outside’ [method] our moms successfully used on us, STILL WORKS! (If the kids aren’t numbed out on screens),” DeFrank wrote on her blog.

This busy mama of five says they’ve adopted the principle of aiming to create more than they consume, and she never plans on turning back.

DeFrank hopes that sharing her experience will encourage other parents in just how easy it is to do a technology overhaul in your own homes. She’s glad she did, and you will be too!