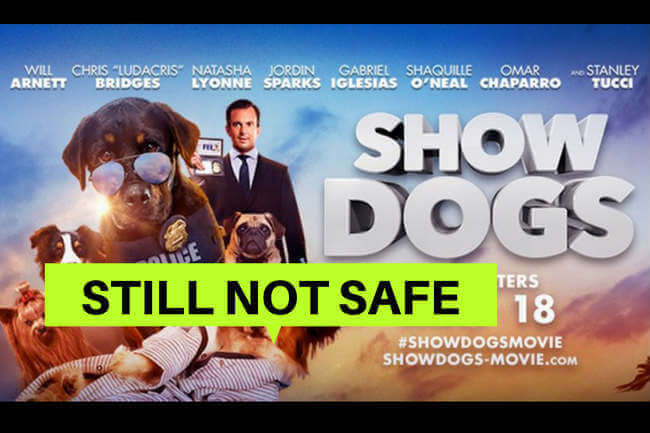 Well, friends, this is an article I was REALLY hoping I would not have to write. Last night I received an email alert from the National Center on Sexual Exploitation that Global Road Entertainment’s announcement that they would cut offensive scenes from the Show Dogs Movie was INDEED too good to be true. When they first made the announcement I said, “I can’t believe this happened!”

I shouldn’t have believed it.

In case you missed the controversy last week, the film contains scenes where the protagonist dog, Max, is being coached to have his genitals inspected as means of winning a dog show. Now I KNOW this happens in dog shows, but should that scene have been put in a kids’ movie? Absolutely not.

Dawn Hawkins, the CEO of the National Center on Sexual Exploitation and I had been chatting about this last week both before and after Global Road made their announcement. Here’s what NCOSE says about the objectionable scenes:

Ok, let me be CLEAR: these are the scenes that Global Road said they were cutting. They pulled the movie, re-cut it, and re-released it in time for the Memorial Day weekend. We all took their announcement in good faith, but when NCOSE screened the movie on Tuesday May 29th, the genital touching scenes were STILL IN THERE.

I’m feeling very deceived and I HOPE that none of you took your kids to this movie expecting it to be cleaned up after Global Road said it would be and after thousands of people read our previous article about that featured their statement!

Hawkins says in the NCOSE’s press release, “Global Road Entertainment has betrayed parents and endangered children by its failure to cut scenes normalizing genital touching from its children’s movie. By sending the message to children that allowing genital touching by adults is rewarding and sexy, Show Dogs paves the way for child abusers.”

I could NOT agree more.

Parents, if you feel betrayed as well, TWEET your disgust at @IMGLOBALFILM and let them know we’re not going to accept their deception, OR take our kids to see the Show Dogs movie or ANY film they produce, ever! 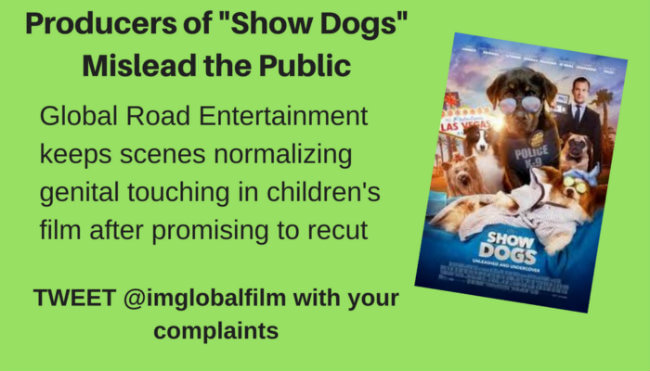 Please follow the NCOSE for more important updates on this and ALL exploitation issues!

Previous articleBehind the Scenes of a Grieving Mother
Next article“Hey Mom, Can I Watch This?” Tips to Filter Your Kids Entertainment