What Every Parent Needs to Know About Sex Trafficking

Now that we have your attention, letʼs start from the beginning. Sex trafficking is defined as: “the use of force or fraud or coercion to control a person in the sex industry for financial gain, OR anyone under the age of 18 in the sex industry.”

To be clear, “Sex Industry” is an umbrella term that covers literal street prostitution, to stripping, pornography, or even sex acts in exchange for food and shelter. You may be thinking, “My kid is far too young to even know about these things, let alone be lured into them.”

(Let’s pause here. How many of you have 11-14 year-olds, or have kids who will be those ages within a couple of years?) 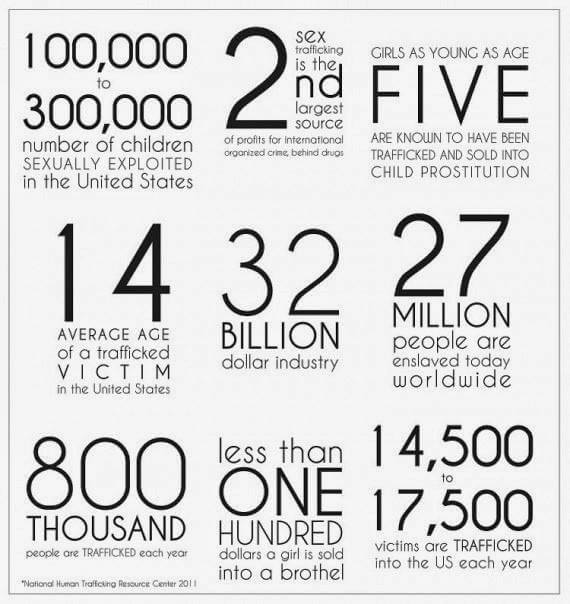 Sex trafficking is organized crime with a universal organizational structure based on successful business models. Yep – it’s big business. It is not a respecter of age, law or moral judgment. Often appearing as “voluntary” prostitution, it is typically observed by the culture as a choice. Moreover, the “choice” is made by people who come from a bad home life, lack a moral compass, and/or are economically disadvantaged. While there are certainly pieces of truth in some of these assumptions, recent research indicates sex trafficking is a public safety issue for every child in our country; somewhat along the lines of seatbelt safety and stranger danger.

While the odds of a child being recruited into the sex industry are small, nationally at least 150,000 U.S. born children are recruited every year. Most parents are and should be uneasy with the odds. In some states like Ohio, a child between the age of 10-18 is four times more likely to be sold for sex than be abducted by a stranger or die in a motor vehicle accident combined. Most parents discuss seat belt safety and stranger danger with their children, and yet how many discuss the red flags of sex trafficking recruitment with their children? Not enough.

A family’s economic status often has little to do with a traffickers decision to recruit a child. In fact, 8 out of 10 females victims in the Dayton, Ohio area came from middle class or higher homes. The specificity of target victims is generally determined by three primary factors: vulnerability, local demand and risk/cost to traffickers.

Vulnerabilities are as unique to each child as the methods used to exploit them. For instance, runaways are especially vulnerable when they hit the streets. They need a place to live and food to eat. Those needs are easily and economically met by a trafficker. However, what about a group of teen girls hanging out at the mall or library? These are common recruitment locations. While their vulnerability may not be entirely self-evident, an experienced recruiter can engage in conversation and know within a few short minutes who among the group’s youth are most vulnerable to force or fraud or coercion.

Demand for commercial sex plays a role in the recruitment of our children as well. While force, fraud and coercion are the common denominators of sex trafficking in every community, the methodology of the business model is unique. For instance, if young black girls are in demand, recruiters will gravitate their supply (victims) toward that demographic. It doesn’t mean they aren’t looking for girls of other demographics though. Sex traffickers are socially connected and if they recruit someone whose “type” isn’t in demand in their area, she will often be sold off to traffickers in areas where her demographic is in demand.

Every decision a sex trafficker makes is filtered through a cost-benefit analysis. How much will it cost to force, fraud or coerce a child into the sex industry? How much time will it take before the child starts making money? Trafficker accounts of cost-benefit analysis consistently indicate childhood vulnerabilities as the “cheapest” avenue to profit. If there is hope for potential victims of sex trafficking, it is here. Children educated to recognize and respond to recruitment methods are less likely to be victims of force, fraud or coercion. If they aren’t easily manipulated traffickers will move on.

Ultimately, when it comes to sex trafficking, the question every parent needs to ask themselves is, “Do I know beyond a shadow of a doubt that I am equipped to identify the red flags?”. If you cannot answer yes to that question, you need to be trained.

Be proactive, moms and dads. To learn about sex trafficking facts and educational resources in your area, visit The Polaris Project.

Be educated. Be active. Be FREE.

This article was co-authored by Tonya Folks and ElizabethVan Dine.

Elizabeth Van Dine
Elizabeth Van Dine is a wife and mom, writer and editor with a passion for ending modern day slavery. Tonya Folks has worn a lot of hats, including broadcast news journalist, grant writer, community organizer, event coordinator, mother of two boys, wife, follower of Christ, and Master of Public Administration. She is currently working toward her dream of ending modern day slavery.