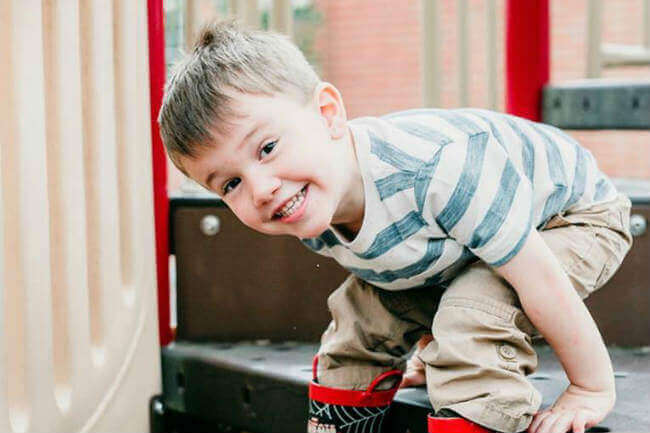 Her Child Drowned This Summer. Here’s What She Wants You to Know

Nicole Hughes was a mom with water safety on the brain. The Tennessee mom of three had her daughters in private swim lessons until they were excellent swimmers. Her youngest child, a boy named Levi, would follow suit when he was old enough.

But he never got to take those lessons. All of Hughes’ water safety knowledge wasn’t enough to save him. In an article she wrote for Scary Mommy, Nicole writes about how her world was turned upside down just five weeks ago on June 10, 2018.

“We were never supposed to leave our beach vacation early to plan a funeral for our 3-year-old son,” she wrote. “And, yet, within the course of one week, we had driven to the beach, returned without him, and held his funeral.”

Hughes goes on to say that drowning is the leading cause of death in our country in children ages 1-4, and yet the subject is severely under-discussed by pediatricians. She says it can happen to any of us, as it happened to her while her family was enjoying a beach vacation and Levi slipped out of the vacation house unnoticed during a busy moment. And most importantly, she says, 69% of drownings happen when the victim wasn’t expected to be in water, i.e., drowning happens most often when you’re NOT engaged in swimming.

Her pain-filled words are hard to read, but all parents NEED to read them.

There is a misconception that drowning only happens when you are swimming. But, drowning also happens when you are 200 feet away from a pool, upstairs, eating Cheetos, wearing your neon yellow crab-hunting shirt, when you leave your mom’s side, even though you are usually Velcro-ed to her. Drowning isn’t splashing and yelling. It is silent, and it takes SECONDS.

I have always taken water safety seriously. In each of the pictures I have of my son’s final day, he is wearing a life jacket. Flying a kite with his dad? Life jacket. Eating M&M’s in a beach chair? Life jacket.

How could I have known that every parent’s worst nightmare would be my reality? It happened so quickly. I don’t know how Levi got away from us as we were cleaning up from dinner, or what lured him to go outside alone. I was the one who found him, face down, in the deep end. Just moments before this horrific discovery, I split a brownie with him. I still had the other half of the brownie in my mouth when I jumped into the pool to grab my son. Mere moments, seconds.

Levi’s drowning death occurred despite the presence of six doctors in the house.

Despite the fact that Hughes’ husband is a doctor and all the families they were on vacation with had a doctor in the family—there were six doctors on site when Levi went into the water—he could not be saved. Hughes uses this point to underscore just how QUICKLY drowning can happen, saying, “Yet, how did I not fully realize just how quickly a child can drown? They initiated CPR immediately, even intubated him before the ambulance arrived. But Levi could not be saved, even with this immediate response.”

You guys…Nicole’s grief bleeds through the words on the computer screen as you read the article. My heart hurts so badly for her. I am well and truly grieved when I read her account. I am also well and truly terrified that my child could be next. We have held off on swim lessons for my youngest child due to his speech and social delays, but now that he is past them and can handle it, it is TIME. Excuse me while I go make a phone call to get him signed up.

Less than 24 hours after Levi’s death, Nicole had become an advocate. She is now on a mission to prevent other children from drowning deaths.

“By that Monday afternoon I already had the idea in my head,” she told Yahoo Lifestyle. Her idea? To assign one adult to be the “Water Guardian” anytime there were kids in close proximity to water. “I kept thinking, literally, ‘Tag, you’re it. I’m tagging you in; it’s your turn,’ ” she explained.

Within a few days of Levi’s funeral, Nicole was in action, calling around to see where she could get actual “Water Guardian” badges made so that the adult on duty, and the the adults in the group could always be aware of who was supervising the children.

Just mere weeks after her son’s drowning death, Nicole’s Water Guardian tags are a reality, as is her non-profit, Levi’s Legacy.

She says, “Based on the research on drowning, I have created a non-profit called Levi’s Legacy. My mission is to eradicate drowning completely. You can read more about my mission (and about designated supervision) at www.levislegacy.com.” 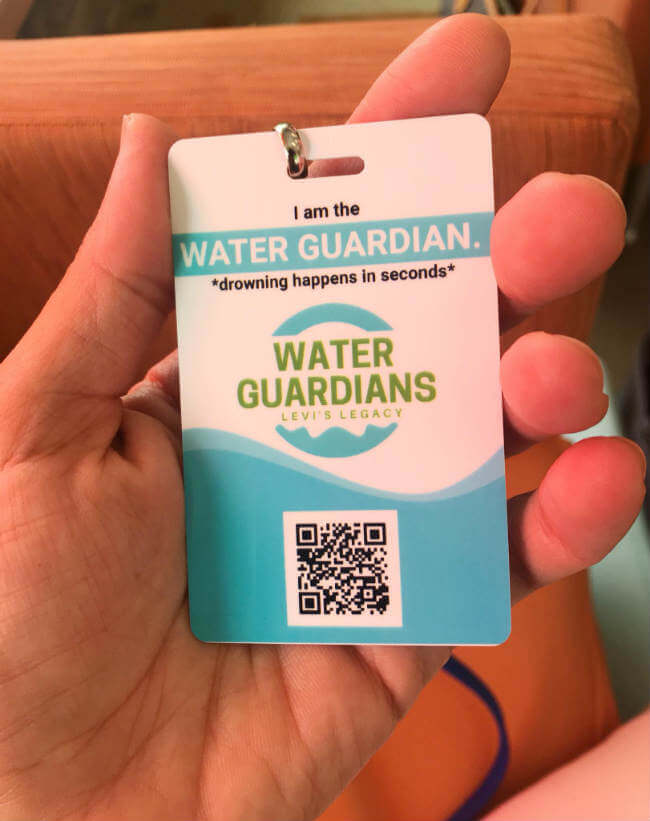 What Nicole Hughes wants most of all to come from this tragedy is child drowning death awareness, and she wants the American Academy of Pediatrics to take the lead.

In her article on Scary Mommy, Nicole underscores over and over again that she didn’t know that drowning was the LEADING cause of death in children aged 1-4. She says if she had known, maybe things would have turned out different. Within her article is a strong to call to pediatricians and specifically the American Academy of Pediatrics to talk to parents about this at child well checks and through other awareness campaigns. She says,

I am well aware how much a pediatrician has to cover during a well-child visit: build a relationship, answer questions, prepare for milestones, look into the ears of a squirming child. Pediatricians have thousands of topics they must be knowledgable of and share with parents. Therefore, American Academy of Pediatrics, you play a major role in setting priorities and equipping your pediatricians with the resources they need in order to inform parents and help eliminate this preventable tragedy. Parents of young children, especially in the age range of 1-4, should be given a handout that clearly explains the statistics on drowning. On the questionnaire, when I fill out it if my child can hold a crayon, hop on one foot, or sleep through the night, there needs to be a section on water safety.  American Academy of Pediatrics, you have the platform and power to reach millions. Please, please join this cause.

I wholeheartedly agree with Nicole on this, and that is why I chose to write this article. I know about water safety but I had no idea that the number one cause of death in our little children aged 1-4 was drowning. I really had no idea.

So let’s change that, friends. Let’s share Nicole’s story, Levi’s Legacy, and the word about drowning death in children. I’ll leave you with some last powerful words from this grieving mom, in the hopes that you will share them, too.

I used to be the parent who would read a story like this one and immediately start scanning, looking for a loophole, desperate for the detail that would exempt me from this particular nightmare ever being mine. But, it turns out, tragedy does not play fair. My son is gone. 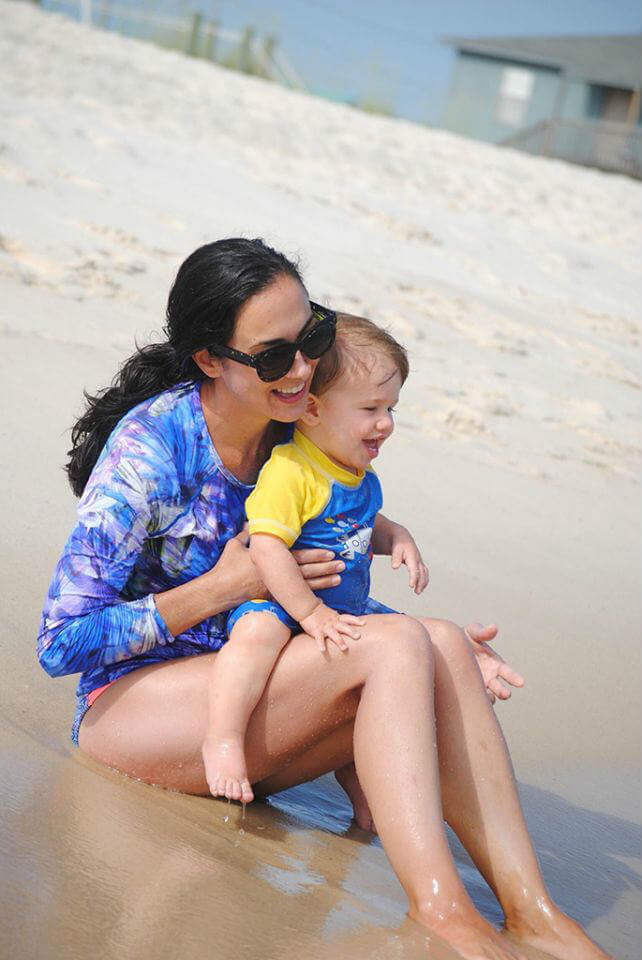