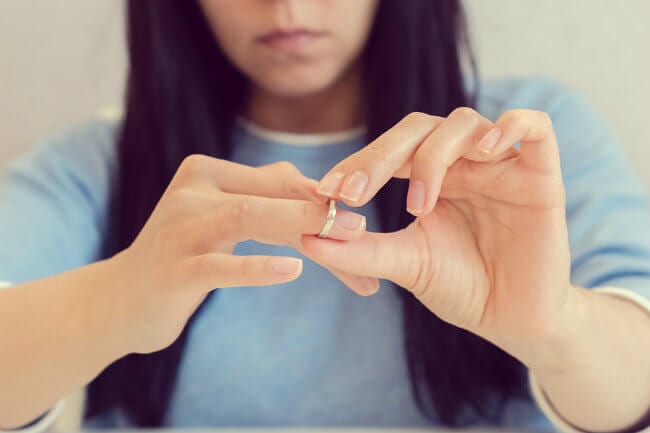 Why You Need a Divorce

I’m going to speak to two different kinds of people today, and then I want to tell you exactly why I think both of you need a divorce.

First, I would like to speak to the one my heart aches for the most because I’ve been there:

To the one who doesn’t want a divorce.

I want to start by saying that I am so sorry that this is the road you are on right now, and that you’re experiencing this pain. I’m sorry that on that day that you said your vows with such love and hope, you never had an inkling that this would happen and therefore, were lead on by your own heart. I’m sorry that the place that was once safe is now tainted, broken place and a source of hurt. I’m so sorry.

Here is a taste of life-giving water for your heart today: I’ve been where you are. Maybe you saw this coming; maybe you were thinking of leaving but decided to stay and fight; maybe you were just as in shock as I was. The pain is no less in any circumstance, but there is light just beyond the rose-colored lenses of betrayal. You are in the fire right now, but it ends, I promise. You will not live in this anguish forever.

I remember the early stages of processing my divorce: anger, grief, hurt, and then inadvertently breathing poisonous life onto the dry bones of those memories. I relived every sordid detail causing them to be further engrained in my brain. I spent my entire pregnancy picturing him with her and blaming myself. While I had a part in my marriage dissolving, I didn’t force him to run into another woman’s arms… Did I? Was I at complete and total fault? Was there one event caused this to happen? Was I that horrible for almost ten years that he felt the need to seek another? Where did things go wrong..?

7 months of bed rest and pregnancy gives you a lot of time for self-loathing to develop.

Speaking specifically to those who have discovered a spouse’s affair: You have done nothing to warrant your spouse’s actions. He or she made that decision of their own accord, and it isn’t your fault. We each have free will, and instead of choosing to work on themselves and your marriage, they chose the coward’s way out. There is no justification for adultery. You and your spouse have the individual responsibility of flourishing in your marriage and working diligently to sustain it. You cannot do that alone, and even the two of you together in full force isn’t enough. Marriage is a three part covenant between you, your spouse, and God.

I know you might be angry with God right now. I was too. How could He let this happen to me? Does He enjoy watching me suffer? Why doesn’t He love me? Darling, He understands. He knows what it means to be a part of a one-sided relationship because each of us has been that to Him at one time or another. He didn’t want this for you. I’m sorry that your partner’s actions have some ground in your life right now, because it shouldn’t be this way. You are allowed to feel however you feel right now, and your emotions are warranted and completely normal. Lean on the Great Comforter, and allow Him to ease the ache you feel. Your feelings don’t scare Him, anger Him, or alarm Him in any way. He is a good Daddy–even when it doesn’t feel like it. I promise.

“Then Jesus said, ‘come to me, all of you who are weary and carry heavy burdens, and I will give you rest. Take my yoke upon you. Let me teach you, because I am humble and gentle at heart, and you will find rest for your souls. For my yoke is easy to bear, and the burden I give you is light.'” Matthew 11:28-30

To the one who wants to leave:

I want to talk to you about one day in particular: the day you realized that you wanted to spend your life with your husband or wife as well as the overwhelming love you felt when you thought about them; how the very sound of their voice used to send your heart into a happy little tizzy. How you used to look forward to every second spent with that special person. How there came a moment you realized you couldn’t even fathom life without them, so you vowed to spend the rest of your forever with that. one. person.

I don’t think you went into your marriage with the objective of divorce, did you? My guess is you went in intent on forever knowing without a shadow of a doubt that you would beat the statistic. You wouldn’t be one of the 50% of marriages ending in divorce.

But along the way, the lines blurred. A little voice snuck in and slowly started leading you astray. Somewhere at the corner of bitterness and aggression, things went terribly wrong. You began to avoid home because you and your spouse fought more frequently than you’d like, and more often than not, they annoyed you, and then someone mentioned that you should  be happy, so you thought, “I don’t deserve this to be treated this way. Why am I even here? Where did the passion and fire go, anyway? Why am I in this ‘loveless’ relationship?”

It’s funny how subtly it starts. Only leading into bigger and bigger fish and more and more lying until you can’t hide anymore and now you don’t even know who you are anymore. But that’s your spouse’s fault, isn’t it? They made you do it, think it, act it, of course.

I’m about to mom you a little bit, and I want you to listen closely to exactly what I am about to say because this will be of great benefit to any relationship you have, whether that be your current marriage or a future marriage: Your promise of forever wasn’t and isn’t conditional on your fleeting human emotions. You said vows professing in sickness and in health, in good times and bad. You are not a coward, you are a fighter and that little voice you’ve been listening to is a liar. The grass isn’t greener on the other side–especially if it’s someone else’s grass. Humble yourself. You are better than this. Your spouse isn’t the only one to blame for what is going wrong in your marriage, and you owe it not just to them, but to yourself to make an effort to fix things; hard, unadulterated work. I’m talking about the kind of labor that has you exhausted in the evenings and leaves you feeling like you’ve accomplished something. It only takes one to ultimately destroy a marriage– don’t be the one who does it. You don’t want to live with that on your conscious.

You owe it to the person who once meant the world to you.

“I tell you the truth, you can say to this mountain, ‘May you be lifted up and thrown into the sea,’ and it will happen. But you must really believe it will happen and have no doubt in your heart.” Mark 11:23

“I sinned and twisted the truth, but it wasn’t worth it. God rescued me from the grave, and now my life is filled with light.” Job 33:27-28

I think every single one of us needs a divorce in our lives. Married, single, engaged; we all need one. The definition of divorce is to separate or cut ties. As humans, we are in a constant state of struggling with resentment and selfishness, bitterness and pride. We are redeemed post-fall meaning that these struggles are no longer “human nature”. We can’t continue to rest on the laurels that we are allowed a certain amount of sin because Adam and Eve ate a freaking apple. When are you going to look at the root of your problems and stop placing blame on yourself, your partner, and the people around you? Your pride isn’t helping you; it’s causing a very real and tangible death every second you allow it to have sway in your life.

God can restore anything, and that includes the marriage that you believe to be dead or unworthy of effort, the friendships you once valued, and the dream that you thought died so long ago. Don’t believe me? Watch what He can do.

This article originally appeared at DearAdelaideRosalie.com.

Shea Sweet
Shea is a 23 year old single mother of 10 month old Adelaide, and a follower of the Most High King. Having gone through everything from miscarriage and infertility, to divorce, and with her current season of  single motherhood, she's been through it all. Shea is a hairdresser in Dallas, Texas, and started sharing her thoughts and experiences in writing through her current project, dearadelaiderosalie.com. Between the bittersweet existence that is being a single mother and her experiences growing up in a broken family, Shea has a heart for single parents and a passion for helping them beat the stereotype. You can follow Shea and Adelaide on instagram.com/shea.sweet