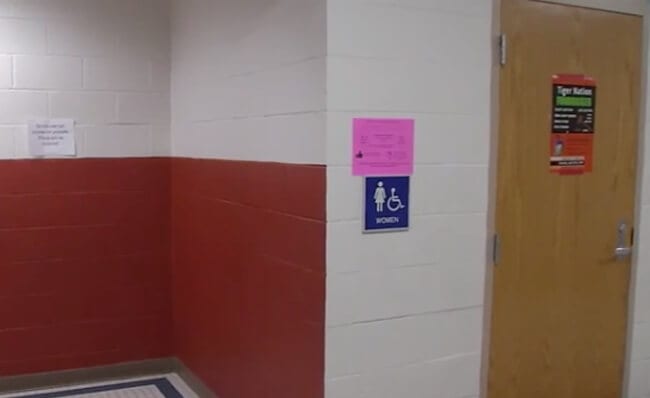 An Illinois school district is raising eyebrows and attention this week after enforcing the decision to remove bathroom stall doors after a message was written in a bathroom stall threatening a school shooting.

Despite both students and their parents being outraged by the new bathroom stall ban, the Beardstown School District is standing by their decision.

In an effort to overcome the shock of having a seemingly normal and necessary piece of privacy taken away from them, students have been forced to get creative.

“Mostly girls have been bringing blankets from their house and hanging it up in the stalls so people can’t see them… Yesterday people started putting their shoes and boots in front of the stall so people would know they’re in the bathroom,” Juan Juarez, a Beardstown High School student told local news outlet, ABC 20.

In reading about the school district’s decision, I, like many others have to question the logic. So someone wrote a threatening message on the bathroom stall. With the addition of the door ban, I’d have to believe the visual threats would disappear, but the reality of said threats may not.

That being said, statistics show that most people who threaten things such as a school shooting, will rarely “practice what they preach,” if you will.

Still, every threat has to be taken with utmost precaution. It’s something that Beardstown School District Superintendent Ron Gilbert says has slowed down since enacting the new rule.

“You have to understand when kids have a place to spend time, whether it’s a minute or five minutes sometimes things happen whether it’s good, bad or otherwise. It has helped limit some of the things that were taking place,” Gilbert told ABC 20.

Between March 22 and March 28, the Beardstown Middle School/High School was put on lockdown twice, and forced to contact authorities a third time regarding undisclosed messages scribbled on the bathroom walls. Administrators reported all three of the threats were deemed “not credible” after further investigation.

“Restrooms are for one purpose only,” Gilbert says. “We understand everyone’s concerns. We’re not going to put people in situations that are harmful to anyone.”

He added, “If you’re going to spend a bunch of time in there not using the restroom for what it’s for, you have to take some measures to keep everybody safe.”

The school district has taken additional precautions regarding the threat written in the bathroom stall, including allowing students to only enter and exit the school through one door, conducting random searches, and utilizing handheld metal detectors at after-school events.

As a woman, and a parent, I have to think the removal of such privacy is actually asking for different rules to be broken. What’s to keep a young boy from walking into the girls bathroom at any point, knowing there’s nothing protecting them from his view? It’s just one of many circumstances that come to mind in this situation.

Representatives for the school district say they have heard the feedback from parents regarding the stall doors and will be taking it all into consideration.

But for now, it looks like the students of Beardstown School District will be storing some extra blankets in the bathroom.