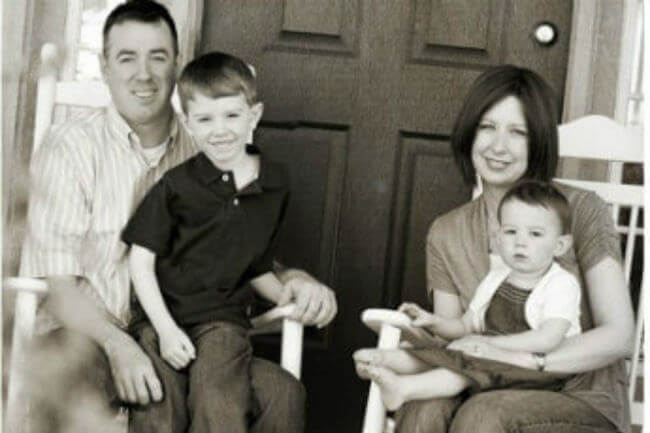 Cancer Made Her Too Weak to Walk Upstairs to Put the Kids to Bed, So She Did This Instead

Her name was Lori.  She was the friend of my friend, Sallie.

Last year, Sallie shared Lori’s story with some of us from church.  She was asking that we pray for her situation.

She was battling inflammatory breast cancer, and she had been told that she would not live much longer.  She had a husband and two small children under the age of seven.

When I heard this, I was definitely cut to the heart.  Just thinking about her situation made me ill.  Those two children of hers would soon lose their mom.  I put myself in Lori’s shoes and imagined what it might be like to tell my sweet kids that I would soon be gone.  Just the thought of that conversation occurring brought tears to my eyes.  No child should have to live without his/her mother or father.

I also found out from Sallie that Lori was doing some amazing things as she waited for her life here on earth to come to a close.  She spent much of her time writing letters and putting together videos and photos for her children to have once she was gone.  I was told that she wrote letters for all of the major life events that were to come for her children.  Birthdays, graduations, weddings, etc.  She put together letters and cards for all of those special days and tucked them away for her husband to give to them when the appropriate time rolled around.

How amazing is that?  What a wonderful treasure those items will be to her children.

I continually received updates from Sallie about Lori’s situation.  The updates continued to worsen.  Shortly after Christmas, Sallie shared that it looked as though Lori was nearing the end.

Then, on a cold January day, Lori let go of this life and went to be with the Lord.

Shortly before she died, Sallie shared these words about her friend:

“I don’t even have the words today. Praying for a beautiful friend, Lori, as she prepares to enter the kingdom of heaven today after one grueling battle with inflammatory breast cancer. She has battled with so much courage and GRACE. The grace she has shown is astounding. I’ve learned so much from you, Lori. Praying for peace and comfort for your husband and your sweet young kiddos, as well as the rest of your family. You deserve to rest in the arms of your Lord and dance on the streets that are golden.”

After the funeral, I approached Sallie and asked her how Lori’s family was holding up.  She said they were doing okay.  Then, she shared a moment from the funeral that I will never forget.

Lori was a physician.  One of her fellow physicians (who was also a close friend) gave the eulogy.  At one point during her message, she shared a very touching story.

She shared that Lori absolutely loved putting her children to bed each night.  She cherished that time.  But, as she neared the end, she found that she could no longer climb the stairs to make it up to their bedrooms.

Her solution to this problem?

She crawled up the stairs so that she could get to their bedrooms and do one of the things that she cherished most in life.

That one simple act speaks volumes to me about the love and devotion that this young mother had for her two little children.

If you are a young mother and you are reading this right now, I pray that you will etch that scene into your memory.  That scene of a woman struggling to crawl up the stairs to be with her children.

I know how exhausting it can be at the end of the day when you have a household of small children.  Sometimes, you find yourself dragging once bedtime rolls around, and all you want to do is get through it so that you can sit down and relax a bit.

But, I would like to challenge all of us moms to remember Lori’s story when we find that we are having one of those nights.

Remember that she wanted so badly to be able to continue to put her children to bed each night, but she is no longer here to do it.

Remember that, even when she couldn’t walk up the stairs to get to her children’s bedrooms, she crawled.

Let’s honor her by looking forward to bedtime instead of dreading it.

Let’s honor her by cherishing what she cherished.

Let’s honor her by remembering that she crawled.

Carly Parks
Carly Parks lives in Central Indiana with her husband, Bryan, and their five young children - two of whom entered their family through the miracle of adoption.  She finds great fulfillment in expressing herself creatively through her work as a freelance graphic designer, photographer, and blogger.  Visit her blog Parks & Recreation to learn more about the Parks family’s journey.  Their recreation.  Their re-creation.  And their ongoing attempts to be a family in which each lives for the other, and all live for Christ.