The “Instagram Five”: Helping Teens Use Social Media With Integrity

Our family has had more than our fair share of roundtables on the topic of social media. It’s not an easy topic, and whether or not your family is on social media, we can all agree it’s complicated. Social media is still so new, relatively speaking. We know a lot about it. But not everything. We especially do not know what the long-term implications of social media use are.

We do know that the average teenager spends a LOT of their day on social media.

An article from the Washington Post reports that teens spend 9 hours a day consuming media (much of which is social media) though I can hardly wrap my brain around that number. (Tweens are a mere 6 hours, if that makes anyone feel better!?) And this article suggests that teens total time spent on social media beats time spent eating and drinking, socializing, and grooming.

Does that make anyone else a bit nauseous?

I can also tell you that I’ve put more time into my chapter on Technology than on any other chapter in my up-coming Boy Mom book. And though I’ve got lots of good information and some helpful suggestions to share, I will not be able to offer a one-size fits all way to approach social media.

Because, as my boys and I conclude each time we get into it on this topic: Social media is really an individual issue. Even a heart issue. And everyone needs to decide for themselves if they want to be a part of it, and how they want to manage their use of it. This is challenging for everyone, even mature adults. So obviously, it can be incredibly difficult when you’re dealing with an immature teenager, whose brain won’t be fully developed for many years.

How can we expect them to make difficult judgement calls on things like:

“Is social media dragging me down?”

“What are my motivations for posting this or that…?”

“Would I be happier if I quit social media?”

How can we trust our kids to put healthy boundaries in place, when everyone around them (it seems) is on social media 24/7?

As a parent, we have a couple of options. Of course we can say no to our kids being on social media. Depending on your child’s maturity level, and a whole host of other factors (including their social situation, level of self-confidence, and so on) this may be the most wise choice.

OR, if you do allow your kids to be on social media, then I encourage you — no, urge you — to coach them in their use of it. To have on-going conversations and to help them set boundaries. Yes we need filters on devices to protect our kids from dangers like internet predators and pornography (I cover that in this post) but there’s more to this conversation than that. We need filters to protect kids in the area of identity and self-worth. Kids also need some coaching on what to share on social media (and ideally, the heart behind what they share.)

These are the topics that come up in conversations with my teens. 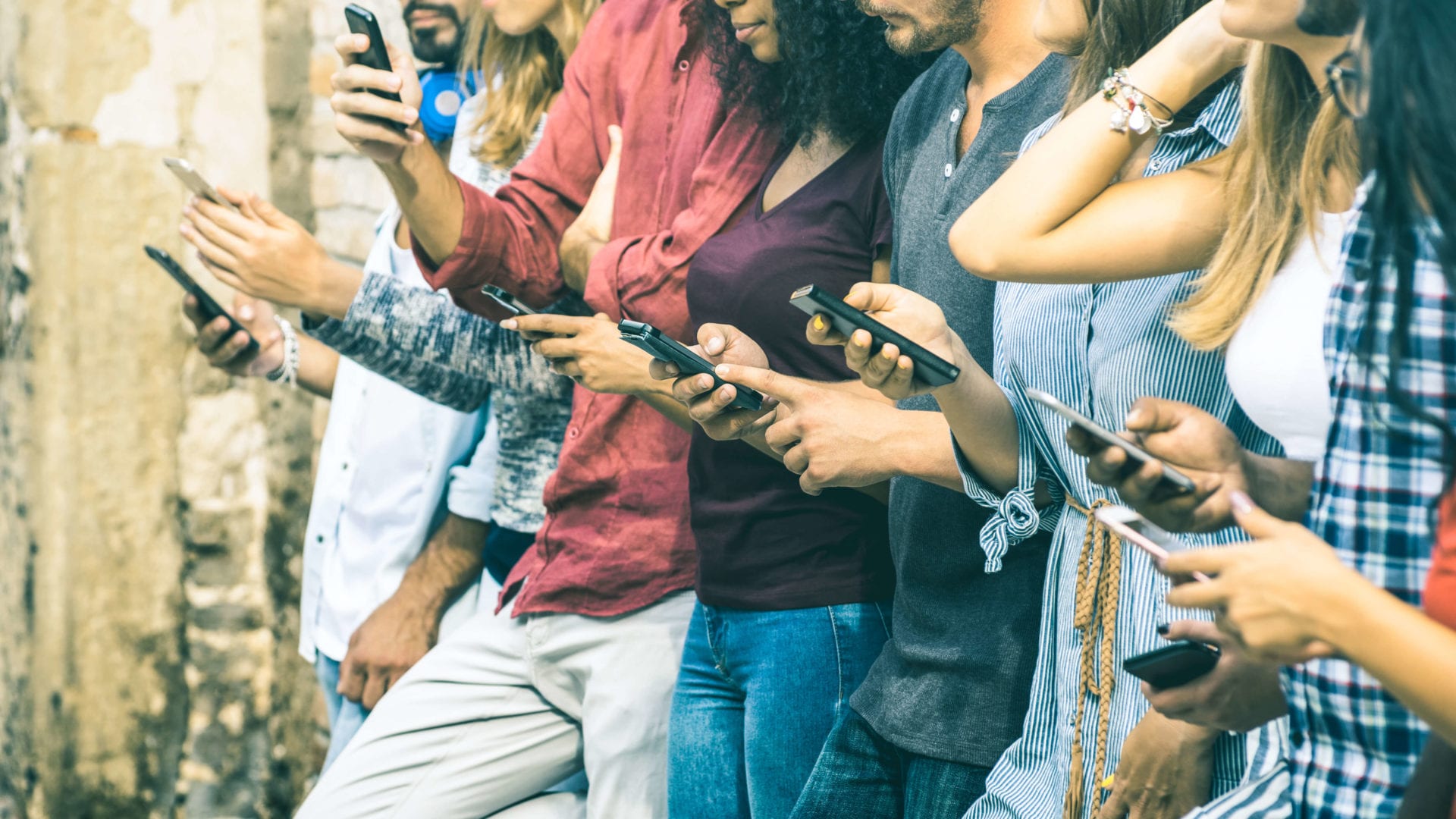 At this point my 3 oldest boys all have Instagram accounts. Luke, 14, uses Instagram mostly for his surfing, and my husband co-manages that. Josiah and Jonah (turning 17 and 19 this week) have been on Instagram for a few years. Today they will tell you they have a “love/hate” relationship with it.

Originally these two loved the idea of Instagram as a place to share their photography, and in general stay connected to the world (as homeschoolers, this seemed especially great.) They enjoyed the entire platform, growing their followers and being inspired by those they followed. It was a lot of fun.

Looking back now, they believe that time on Instagram triggered more feelings of jealousy, insecurity, and general FOMO (Fear of missing out) than anything else. They believe that all of the typical teenage struggles are only compounded by daily scrolling through an Instagram feed.

Aware of how this has affected them, my boys have taken many breaks from Instagram. After a few months off of it, they have reportedly felt happier. And with that in mind, they have come very close to deleting their account many times.

Over an afternoon coffee last spring, Josiah brought it up again: “I think I want to quit Instagram.”

I nodded, aware that this has been on his mind before. But then I thought of some of the positives of Josiah’s Instagram use. About college next fall…and how I know his Grandma and other family and friends awould love to keep up with him via Instagram. (I’ve enjoyed following many of my friend’s kids during their college journeys!) Josiah has also shared plenty of positive inspirations he has found through Instagram. He’s even gotten to know his new college roommate through it.

“You might want to take a break” I suggested, “but maybe wait to delete it until you are sure.” It was probably selfish, but I wanted to believe there was still some good in keeping his account.

As we sat and sipped our coffee, we talked again about Josiah’s reasons for wanting to throw in the Insta-towell. His main thing was that he hated the idea of using social media to impress people…to try to keep up or look cool or fit in with what others were doing. That stuff has become such a turn-off to both of my older boys. They don’t want to buy into it, and I respect them for that.

{^My boys this morning, headed to work at Lei Lei’s, Turtle Bay. Josiah gets to train Jonah on his first day of work…which also happens to be Jonah’s 17th birthday!}

We wondered if there was a way to use Instagram without getting lost in it.

That’s when it hit me.

“Here’s an idea!” I suddenly felt a little genius.

“What if you do this…” I said, leaning in excitedly.

“Since this is about your own heart and keeping a check on your motivations….What if you come up with FIVE PEOPLE…and imagine that you are instagramming for these specific five people. Of course you’ll still have a lot of other followers, but these five can be your personal accountability. (Even if they don’t know it.)”

This time Josiah lit up. His eyes widened and he said “I’m liking this…go on.”

I continued, “Of course it’d be great if your mom was on the list, (*wink*) but you can decide who you want on your list. If you’re posting with the people in mind who you really respect and want to share your life with, then you’ll be sharing the right photos, with the right captions and the right heart, and you don’t have to second guess anything. Let other people do what they will. But you can use it your way.”

I added one more thing: “I also recommend that once you post something, you decide if you are going to scroll through your feed or not. And if you do, be sure to set a time limit.” I know how scrolling can suck us all in, especially as I’ve been working on setting boundaries for my own social media use.

Josiah was all in. He was satisfied and even excited as we finished our coffee. The next day he approached me with a smile. “OK Mom! I’m doing it.” He said. “I’ve got my list!” “Wanna hear who’s on it?”

He went on to tell me that indeed, I made the cut, as well as his youth leader (the one who has mentored him all through high school and beyond,) and the 15-year-old boy that he has been mentoring for the last year. He named two other people who he has great respect for and knows would enjoy keeping up on his life. (Neither were his peers, interestingly.)

It’s been a few months since we had this conversation, so recently I checked in with Josiah to see how things are going. He responded that his “Instagram five” has been a game changer. He no longer wrestles with whether or not to post, and he has quit mindlessly scrolling through his feed. He hasn’t posted much this summer, but the few times he has, he said it’s as simple as running the photo and caption by his five accountability partners. I am so glad.

While this may not solve all of our battles with technology or even social media, it might just be a small step in the right direction.

TRY IT AT HOME

If your kids are on social media, you might want to ask them to come up with five people they would like to keep in mind as they post. Encourage them to include people who they’ll be glad they targeted, later. (They might consider a future boss…or spouse–or in-laws, hehe.) This may be challenging, but some teens might really embrace the challenge. They might even be willing to reevaluate older posts in light of this new approach. I hope this is a helpful way to come alongside your teen as you coach them in using social media with integrity.

A version of this post was originally published on monicaswanson.com, published with permission.

Previous articleMy Son Descended Into Mental Illness After Having Strep Throat
Next articleMotherhood: The Tension of Feminism, Work, Home and Family in The “Have it All” Generation

Monica Swansonhttp://monicaswanson.com
Monica Swanson and her husband Dave are raising tropical fruit and their four (surfer) boys on the North Shore of Oahu.  Monica home schools her sons, and offers encouragement and inspiration for families on her blog, monicaswanson.com. Monica’s book, Boy Mom will be released in August of 2019.  You can find her on Facebook, IInstagram, and  Twitter

When Hard Circumstances are Redeemed — Advantages of Being Bullied