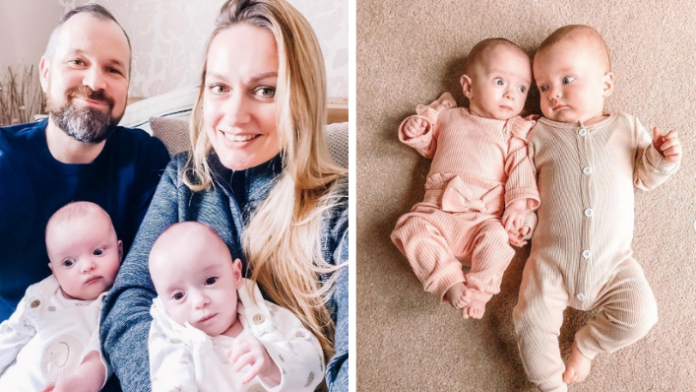 After more than a year of infertility treatments, Rebecca Roberts and her partner, Rhys Weaver, were over the moon last year when they learned they were finally expecting their first child.

They went in for an ultrasound at seven weeks, and Rebecca says it finally felt real when they heard the beautiful sound of their growing baby’s heartbeat for the first time.

“I remember walking away from the very first scan so happy,” Rebecca said.

Just five weeks later the couple from Wiltshire, England went back for their son Noah’s 12-week ultrasound. Only this time they were in for a major shock. As the sonographer moved across her belly, Rebecca could tell something was up.

“I thought something awful had happened,” the 39-year-old said. “The sonographer looked at me and was like, ‘do you know you’re expecting twins?’”

But this wasn’t your average set of twins. It appeared that one of Rebecca’s babies was considerably less-developed than the other. Doctors later diagnosed her pregnancy as superfetation, an extremely rare phenomenon in which a pregnant woman becomes pregnant a second time with another, younger fetus.

At first, Dr. David Walker, Rebecca’s OB/GYN was completely perplexed by the discovery of a second baby.

“My initial reaction was, ‘How had I missed the second twin?'” he said, reflecting back on Rebecca’s first ultrasound.”And following this [I] was slightly relieved that it was not my mistake but a quite extraordinary pregnancy.”

It was only by measurements and regular scanning throughout Rebecca’s pregnancy that doctors were able to determine that the second baby—a daughter named Rosalie—was consistently three weeks behind her twin brother. Due to the limited amount of information available about superfetation, doctors warned Rebecca and Rhys that Rosalie may not survive.

“What came after getting pregnant was just such incredible hard work. It wasn’t all happy and rainbows like you expect a pregnancy to be. It was quite scary,” said Rebecca. “With twins it’s scary already, and then because of my age and the fact that they were conceived at different points, and then we were told that all the odds were against Rosalie.”

At 33 weeks pregnant, doctors had to induce Rebecca due to an issue with Rosalie’s umbilical cord, which had caused her to stop growing.

“She was only a 30-week gestation baby who hadn’t grown properly at the end,” Rebecca explained. “Her placenta never really grew properly.”

“We got to see both of them as soon as they were born,” Rebecca said. “It was absolutely beautiful.”

“One of the best feelings I’ve ever had,” Rhys added.

The family’s introductions were short-lived as both babies were whisked away to the NICU, where Noah remained for three weeks, and Rosalie for 95 days. The family of four was finally reunited just a few days before Christmas when doctors gave Rebecca and Rhys the go-ahead to bring Rosalie home.

“We could finally get on and start our lives. It felt like we were on hold having them in the hospital,” Rebecca said.

The twins are now almost six months old, and Rebecca and Rhys are continuing to share their family’s story in Instagram.

“They’re my supertwins,” Rebecca told Good Morning America. “Every day I look at them and think, ‘Wow, I’m so lucky.’”

Although both twins are healthy and growing strong, Rebecca says there’s definitely a noticeable age difference between them. But their bond is what touches Rebecca the most.

“When we lay them down next to each other, it’s like they instantly know, and they reach out and touch each other’s faces, and it’s just the most beautiful thing,” Rebecca gushed. “Twins have an amazing bond anyways, but the story between these two, when they’re old enough to find out, they’ll feel even more special.”

Rebecca says she wants others to know that miracles can indeed happen. “My children are proof of that,” she says.