How to Talk to Your Child About Suicide 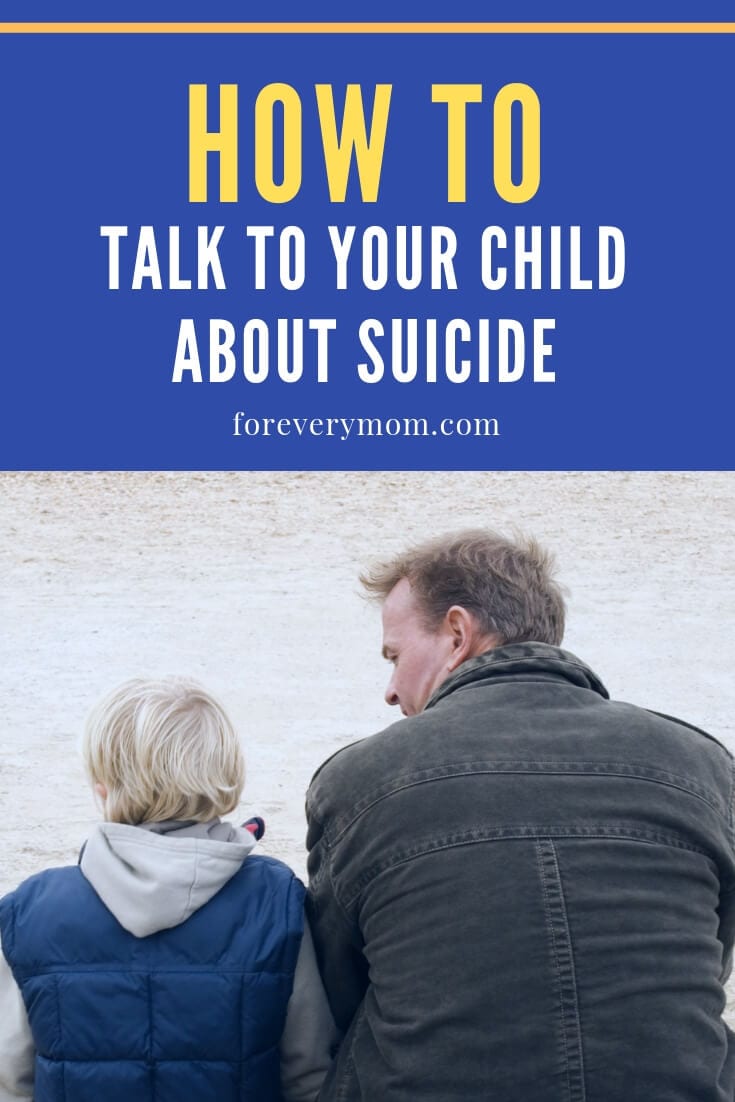 As a therapist, parents ask me how to talk to their kids about all the tough stuff topics, like depression, anxiety, suicide, and suicide attempt. My goal for this series is to address each of these topics and help you and your child navigate the more difficult areas of life.

And in the almost ten years of being a therapist, I’ve worked with probably hundreds of clients, young and old, who have had thoughts and attempts of suicide. It is a topic that is continuously present in the back of my mind to assess for risk and safety.

While the topic of suicide shouldn’t be that ever present in your mind, it’s essential to have an understanding of why it happens so that you, as a parent, can explain this behavior to your child.

“Talking about suicide may give someone the idea.”

One of the most significant myths about suicide is that if you talk about the topic, it may give someone the idea.

Here’s the truth, if your child doesn’t know about suicide, you have the opportunity to share with them the finality and sadness associated with the topic. You can discuss the other options they have for dealing with emotional pain and hardships.

If your child already knows about the topic of suicide, you then have the opportunity to discuss their thoughts and what it means.

“People who talk about suicide won’t really do it.”

Think about the Bible verse – Proverbs 4:23 Above all else, guard your heart, for everything you do flows from it.

When something is on your mind or has become a focus, you tend to talk about it. Ponder it. Spend time finding out more about it.

The same is true for suicide. Some individuals will be blatant about the topic and others will talk more in themes about death, dying, and potentially the after-life.

“If a person is determined to kill themselves, nothing is going to stop them.”

The reason a person contemplates, attempts, or completes suicide is to alleviate pain. It may be an emotional pain due to trauma, past abuse, or current situations. Or it may be a physical pain due to chronic or severe illness.

Hopelessness is the belief that nothing will get better. That life will always be bad, difficult, and traumatic.

A person who is contemplating suicide often feels isolated. They may feel like no one understands them or they are different. The result is often to pull-back from other, thus increasing the experience of loneliness.

A person who is at risk for suicide often struggles to see themselves in the future. They feel stuck in their current distress and can’t image or plan for life outside of that situation.

Believe There is No Other Option to Alleviate Pain

Of the four risk factors, this is the most effective one to alter and the starting point for any therapist. The goal is to help the person understand that there are other ways to alleviate their pain.

If a person talks about:

Increase or change in the following behaviors:

Increase or change in the following moods:

The Difference Between Suicidal Ideation and a Suicide Attempt

Suicide ideation is having thoughts about suicide and the end of their life. This is very common and not necessarily a sign that a person is going to attempt suicide.

Fleeting suicidal thoughts – “Life is hard, and I wish I didn’t have to do it.”  If we are honest, that is a thought that each of us has had at some time or another. But that doesn’t mean we are suicidal.  While having these thoughts can be disconcerting, by themselves, they don’t suggest a suicide attempt.

Suicide Plans – A suicidal plan ranges from vague with no access to detailed and specific in time and place, plus access. These are the details that I am focusing on when I am assessing for risk and a potential need for hospitalization.

Suicide Intent – Intent is resolved or determined to do something. In this case, complete suicide. The level of suicide intent is a significant risk factor.

Suicide Rehearsal – A rehearsal is not the same as a suicide attempt. The point of a rehearsal is to ensure that when a person chooses to commit suicide, the plan will work. (Testing the weight of a rope for hanging. Practicing cutting to be comfortable with the feeling and sight of blood. *Different than self-harming behavior.)

A suicide attempt is an actual act of trying to end your life. The result is either death or a failed attempt.

Often the discussion is that if a person talks about suicide, they are just “attention-seeking.”  That is a dangerous line of thinking and not entirely accurate.

Again, the reason for suicide is to eliminate and alleviate the current experience of pain.  However, sometimes the source of pain feels as if no one cares, likes/loves them or wants them around.

The pain is real. The secondary gain of discussing suicide may be increased interactions and affirmations. That may become their way of alleviating their suffering.  The dangerous aspect of not believing the person is “actually” suicidal is that they may receive confirmation that no one does love or care.

How to talk to your kids about Suicide

I pray this post helps you to understand better why suicide happens and for you to feel better equipped to talk to your child about this ‘tough stuff topic.’

A version of this post originally appeared on humblefaithfamilywellness.com, published with permission.

Previous article5 Things Pregnant and New Moms Want You to Stop Doing
Next article‘Am I Invisible?’ – One Mom’s Pain Relieving Response to Being Excluded

Melissa Gendreau
Melissa Gendreau is a Licensed Mental Health Therapist and National Certified Counselor. She works at a Christian counseling center working with children, families and couples. Melissa's areas of exeperience includes: anxiety and depression, self-esteem, attachment disorders, parent education, trauma, marital issues, and autism. Her clients come from all walks of life and are on various paths in their pursuit to know Jesus. Melissa is also a wife and mommy to two pretty neat kids. You can learn more at her website humblefaithfamilywellness.com or find her on Facebook or Twitter @humfaithfamwell.