Ah, dads. You can’t live with them, and you surely can’t live without them. Who would be there to teach us how to ride bikes, or throw the football. Who would read us bedtime stories with ALL the characters and funny voices, or cheer us on through the good and bad of high school sports?

Dads are some of the greatest treasures in this life. They’re also probably the greatest source of embarrassment and goofiness!

That’s why the internet has gone totally wild over Dad Jokes. Told by middle-aged men, (or millennials pretending to be middle-aged men), dad jokes are simply those pun-filled quips and down-right corny jokes that call for a literal face-palm.

Check out these 33 dad jokes that are so bad, they’re good!

1. My kid wants to invent a pencil with an eraser on each end, but I just don’t see the point.

2. How do you organize a space party? You planet.

3. Why do chicken coops only have two doors? Because if they had four, they would be chicken sedans!

4. I used to have a job at a calendar factory but I got the sack because I took a couple of days off.

8. What time did the man go to the dentist? Tooth hurt-y.

9. Did you know the first French fries weren’t actually cooked in France? They were cooked in Greece.

10. What did the buffalo say when his son left? Bison!

11. What do you call a Mexican who has lost his car? Carlos.

12. Why don’t crabs give to charity? Because they’re shellfish.

13. Did you hear about the restaurant on the moon? Great food, no atmosphere.

14. What do you call an elephant that doesn’t matter? An irrelephant.

Dad: “Ah no thank you, just leave it in the bottle.”

16. Why couldn’t the bicycle stand up by itself? It was two tired.

17. I thought about going on an all-almond diet. But that’s just nuts!

19. How do you make an octopus laugh? With ten-tickles! 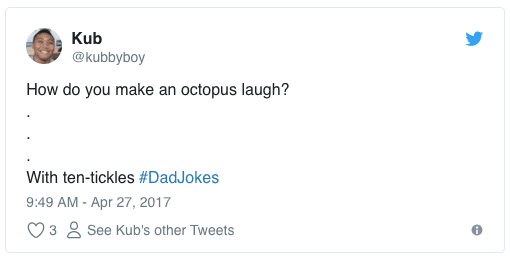 20. What do you call a man with a rubber toe? Roberto.

21. What do you call a fat psychic? A four-chin teller.

22. The rotation of earth really makes my day!

23. How does a penguin build its house? Igloos it together.

24. If alpacas could sing in a group it would be alpacacappella.

27. I had a dream that I was a muffler last night. I woke up exhausted!

28. On all of my medical forms growing up, my dad wrote ‘red’ for my blood type. To this day no one knows my actual blood type.”

29. I was addicted to the hokey pokey…But, I turned myself around.

30. Did you hear the news? FedEx and UPS are merging. They’re going to go by the name Fed-Up from now on.

33. Did you hear about the guy who invented Lifesavers? They say he made a mint.

Previous articleTo the Stay at Home Mom Who Is Wasting Her Life
Next articleFear-Based Parenting: How I Made Motherhood My Idol & Disguised it as ‘Passion’

The Mental Load of Motherhood That No One Talks About