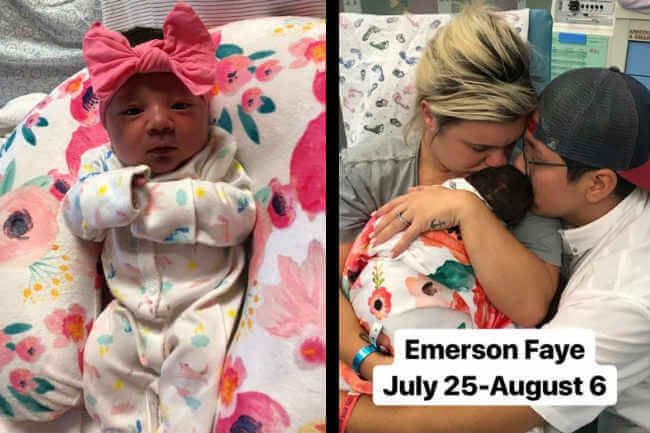 Grieving Mom Says: “Get the Word Out. My Baby Didn’t Deserve This”

I’ve been in the “mom blogging” scene since its infancy. I first started writing about parenting and making “internet friends” in 2007. Once blogging conferences became a thing, I met tons of those friends in real life, and made new ones. On Facebook over the past ten years, I’ve watched many of these “mom blogger” friends grow—and watched their kids do the same! The kids that were babies when we started are now teens, and the kids that were teens when we started are now bonafide grown-ups.

One year I met a Texas blogger named Shauna Glenn. I can’t even remember what conference it was, it was so long ago, but thereafter we became Facebook friends. And even though I don’t really know Shauna well at all, over the past few years I’ve watched some of her kids grow up, get married, and become parents themselves. Some of my mom blogger friends, including Shauna, are now grandmothers! It’s crazy! I’ve watched them welcome this new status and these new babies with joy.

But last August, I watched Shauna have to let go of one of these grandbabies with great grief. Her granddaughter, Emerson Faye, her daughter Presley’s baby girl, passed away at just twelve days old. Shauna’s posts were so raw with grief, I could hardly behold them. I knew Emmy had simply gotten sick and died, even though she’d born born perfectly healthy, but I didn’t know why.

Now, thanks to a Facebook post by her mom Presley, I do know. Presley is finally ready to end her silence and try to spare another family the fate and grief that hers has gone through. In her post, she implored the readers to share, and “get the word out.” As soon as I saw it, I knew I would do just that, by writing this article.

12-day-old Emerson Faye died of HSV-1, also known as the “cold sore virus” or the “kiss of death” for infants.

In her post, which I’ll embed in the bottom of this article so you can see all the beautiful photos of Emerson and celebrate her life, Presley says:

“I know my family and I have been quiet about what exactly happened to our sweet girl. I wasn’t going to say anything yet but I’m tired of the speculation and it’s time to bring awareness to the terrible illness that took our baby away from us.

Emerson ended up passing away from what is called the HSV-1 virus. It’s the Herpes Simplex Virus most commonly known as the cold sore virus or the “kiss of death” for infants. For adults it’s not a big deal. But for infants with little to no immune system, it’s fatal. When someone who has the virus in their system and kisses an infant it can spread rapidly. You can have the virus and not even know you have it. You don’t have to have an active cold sore to pass it on. You shed the virus in your saliva and when it gets on the baby it goes through the body so fast.”

The grieving mom then goes on to say exactly how HSV-1 affected her sweet baby girl.

“It attacks the brain first. It shows up as a type of meningitis. It’s fluid based around the vertebrae and goes straight the the brain. It then spreads to all their organs. It happens so fast that you don’t even know the baby is sick. I’m Emerson’s case, when we arrive[d] to the hospital, her liver was completely gone. Her kidneys were right behind. Everything was failing. She was having multiple seizures until she was brain dead. Her heart stopped beating and the only thing that kept her alive were machines. My daughter, my own flesh and blood who I created out of love, was on life support and I had to be the one to pull the plug on her life. A mother should never ever have to burry their child. The virus took her at just 12 days old and we watched her die a very slow death. And now I have a lifetime without her.”

Presley and her husband Elias, who also have two older sons, want to get the word out about how HSV-1 is almost always fatal to infants, and how parents can protect their babies, since many who have the virus don’t even know it.

“Everyone needs to know about this virus and what it does to children and their families! PEOPLE!!!! STOP KISSING BABIES THAT ARE NOT YOURS!!!!! WAS YOUR HANDS WHEN YOU ARE AROUND NEWBORNS!!!!! I have seen stories about other infants passing from this same virus but you never think it’s going to happen to you. Well this time, it did. My babies don’t have their sister and my husband and I lost our only little girl. Doctors don’t see this very often. There’s not a lot of cases on this but it’s starting to spread more and more. And now it happened right here to us. Our perfectly healthy, happy, BEAUTIFUL angel is no longer here with us because of a terrible virus that people need to be more aware of.”

And now that you are aware of the dangers HSV-1 can pose to infants, Presley Trejo wants you to make others aware also: share her words and be RESPONSIBLE around infants!

She included some photos in her post of she, her husband, and their boys saying goodbye to baby Emmy. They are, as she says, very personal, and even hard to look at. But if it helps spread awareness about HSV-1 and infants, she’s willing to make the sacrifice. She says:

“There are pictures I’ve posted that are very personal. Please feel free to share this post. Get the word out. People need to know about this sickness. This is a serious and dangerous illness. Do your part, stop kissing babies and start washing your hands. These babies don’t deserve it. Emerson didn’t deserve it. I as a mother and wife didn’t deserve it. My husband and kids don’t deserve it. And now we will live a whole life time of ‘what if’s’. I will never see her go to kindergarten, graduate high school or college, my husband will never walk her down the isle on her wedding day, I will never see her be a better mother than me. It’s not fair!! We should have never had to go through this. I love you Emerson Faye. I will carry on your name and your love till eternity. I will never forget you. I will never stop loving you. Fly high beautiful baby.”

Presley’s post is below…please share this so that Emmy’s death will not be in vain. I pray her story will save a life, save another family from HSV-1.