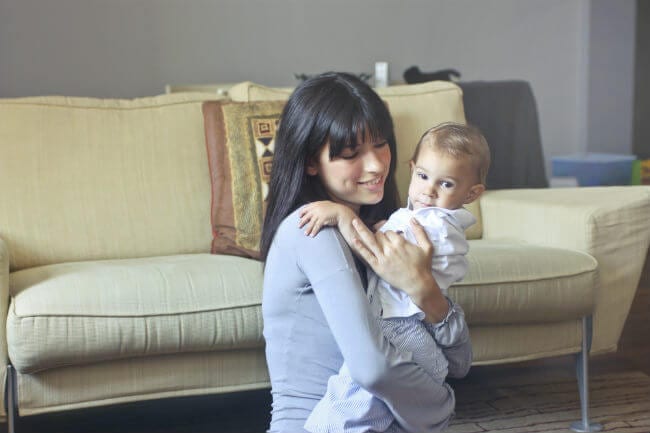 I was a perfect mother until I had children.

Prior to my on-the job training in How to Raise a Child When You Don’t Have the Slightest Idea What You’re Doing, I’d see kids acting up in the grocery store and think, “Well. That mother needs to practice first-time obedience.” When I noticed babies with runny noses, I wondered, “Can’t that woman see her child needs a tissue?” Now I know that fifth-time obedience often feels like an accomplishment and most babies react to having their nose wiped as if they’re being tortured.

I want to be a mom who encourages other moms. I want to give what I’d like to get. The following well-timed words (along with a couple phrases to keep to myself, thank you very much) seem to be a good place to start:

“You’re doing a great job.” While she was out shopping, a friend of a friend saw another mother doing her best not to overreact to the meltdown her two-year-old was having. Other shoppers were throwing dirty looks at the weary mom, so the woman observing the scene went up to her, gave her a hug, and told her, “You’re doing a great job.” We get this kind of feedback as students with an “A” on a test or as employees with a raise or a positive review. But as moms? Well, the feedback I’m getting these days is mostly the annoyed throat-clearing I hear from my tween whenever I slip up and refer to her father and sister as, respectively, “daddy” and “sissy.” WHICH I have been doing for 11 years and will require more than 10 minutes to convert to “dad” and “sister.” Honestly, if another mom tells me she thinks I’m doing anything right, it feels better than acing a test or getting a bump up in salary. Since I assume I’m not the only one who feels this way, I want to try to look for opportunities to pass along kudos to my partners in parenting.

“Is there anything I can do to help?” After giving a word of encouragement to the mom in the store, my friend’s friend asked if she could help somehow. Her kind offer was tearfully and gratefully received, and she ended up distracting the toddler so his mother could finish her errand. As moms, this is often what we need most: someone to help carry the load for just a few minutes so we can pull ourselves together, do what needs to be done—and get the heck out of the store.

“You are a good mom even if you don’t always like being a mom.” When my first daughter, Lydia, was about 6 weeks old, we had a especially bad night. She wasn’t sick, but no amount of rocking, feeding, serenading, cuddling, or holding soothed her, and at that point my own sleep debt felt like a dead weight around my eyes. The next morning, I told my husband, “I love Lydia, but not enough to be her mother.” He stared at me in bewilderment and horror before I sent him on his way to work and told him I’d figure it out. I made some adjustments to my newborn’s schedule, and things improved pretty quickly, but I always try to encourage new moms that if they run into a similar moment, it does not mean they are a bad parent. It does not mean they don’t love their child. It does not mean they are not grateful for the gift they’ve been given. I am actually encouraged when I see other moms who don’t have it all together because it shows me I have company in my mess. If a fellow mom needs to tell someone, “I don’t like my child today” or “I’m not thrilled about being a parent right now,” I want to be a safe place for those words to land.

On the other hand, I need to bite my tongue if these kinds of words are on the tip of it:

Two things I’m going to tell other moms, like, NEVER

“Did you ever think about…?” A friend of mine was recently feeding her newly adopted daughter a bottle when another mom asked, “Did you ever think about breastfeeding?” My friend told her, “I did with my other three children” and left it at that. (She’s wise and self-controlled and nice that way.) I need to remind myself that I don’t know the details of another mom’s life. Maybe she can’t breastfeed. Maybe she’s impatient with her kids because her own mother is dying of cancer. Maybe she’s letting her daughter wear that to church because just getting her daughter to church in the first place required a miracle on par with the parting of The Red Sea and if her daughter is clothed at all, it’s good enough. If someone wants parenting advice from me, they’ll ask for it.

“It goes by so quickly.” When I was a young mom, older ladies would admire my babies and tell me sweetly, “Cherish every moment. It goes by in a minute.” Now that I am, well, not a young mom, I recognize the truth of their counsel. I look at my 16-year-old and think, “When did this happen?” But I also understand that when you’re in it, time does not pass quickly. When you’ve had 3 hours of disjointed semi-sleep (was that a cry?) and you haven’t had a shower and you really are not enjoying the stage of parenting you’re in and you cannot imagine getting out of it, time crawls. If I get the chance, I hope I’ll choose to to tell that new mom in the grocery store, “I know being a mom is so hard. But what you are doing is important. It matters. It makes a difference.” And then I might offer to buy her a coffee.

Don’t Fall In to The Upside Down of Parenting

Previous articleGone 15 Years, Here’s Why Mr. Rogers Is Still Constantly In the News
Next articleKids Playing Sports: How to Destroy Your Child

Elizabeth Spencer
Elizabeth Spencer is a great sinner redeemed by a great Savior. She's been married for 22 years to an exceedingly patient husband and has two teenage daughters who make her look really good as a mother. She blogs about faith, food, and family (with some occasional funny thrown in) at Guilty Chocoholic Mama and vents about hormones and sleep deprivation over on Facebook.