No, I’m not telling you to marry a reptilian/man hybrid, just the man underneath the mask.

You know…the one that will put on a silly mask just to make his kids laugh (and his wife too.)

The guy that works hard for his family and often puts his needs dead last.

The guy that goes to three different grocery stores to try and find his pregnant wife that special macaroni salad she just has to have (or the baby has to have.) 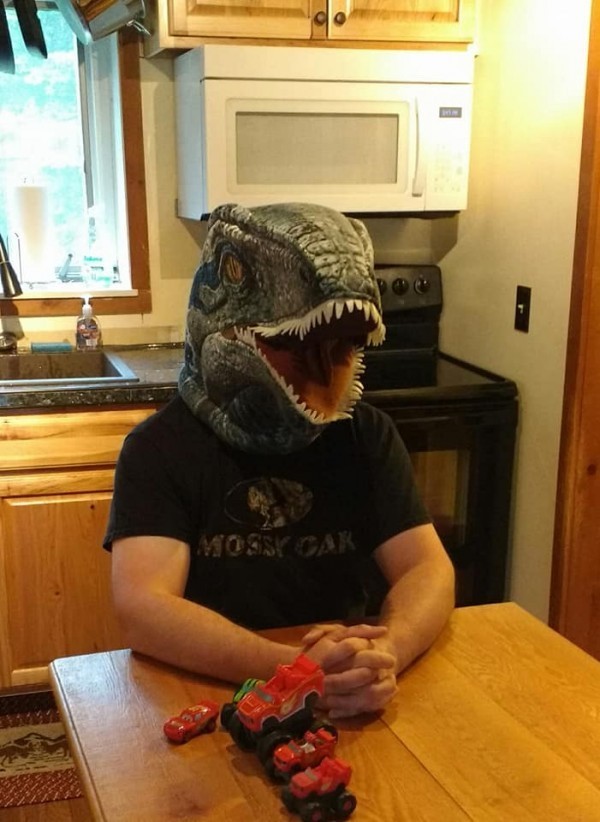 The guy that isn’t afraid to speak up when he disagrees with you because he knows your love is strong enough to withstand it.

The guy that will change your beloved cat’s litter the entire time you are pregnant and even for a couple months after that because he knows you are just too tired to do it.

The guy that leaves the toilet seat up too much and crumbs all over the kitchen counter too often, because nobody is perfect.

The guy that will rub your shoulders when you’ve had a hard day at work or at home with the kids.

The guy that you can just look at from across a crowded room and know exactly what he is thinking in that moment.

The guy that will hold your hand after you both find out your baby’s heartbeat has stopped beating.

The guy that challenges you to be the best version of yourself and credits you for doing the same for him.

That guy – the one that is first and foremost your best friend. The one that you love to watch play with your kids because you feel like your heart could just explode with the amount of joy it bring to you.

That guy, you know the one, you might even already be married to him…if not, wait for him. He’s out there. I promise you.

A version of this piece originally appeared on These Boys of Mine by Britt LeBoeuf, published with permission.

Previous articleMom’s PSA About the ‘Black Marks’ on Changing Tables is a Must-Read for ALL Parents
Next article20 Martin Luther King Jr. Quotes For Living Your Best Life Today

Britt LeBoeufhttp://theseboysofmine.com
Britt is a married mother of two beautiful boys from upstate New York. You can find her first self-published novel, “Promises of Pineford” on Amazon and Lulu. You can also find her at These Boys of Mine by Britt LeBoeuf and on Facebook.. Her work can also be found on Scary Mommy, Her View From Home, That’s Inappropriate, Blunt MOMS, Today Parents, and Organized Mom.

When You Don’t Know What To Do as a Parent, Do This

When You Don’t Know What To Do as a Parent, Do This