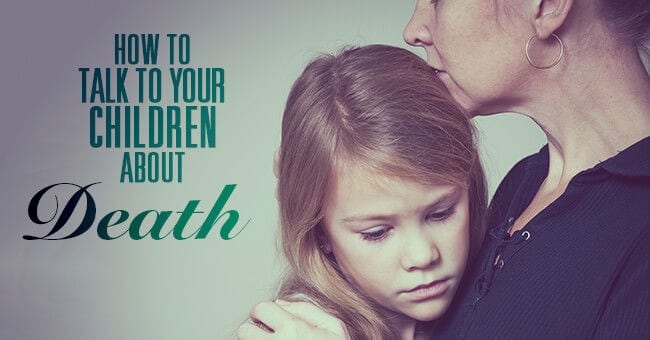 ‘Mommy, I Don’t Want You to Die!’ — How to Talk to Your Children About Death

To be honest, I hated to even write on this topic because, in my messed up mind, I thought, “Oh great, Lord, if I write about this that means I’m going to die isn’t it? You are going to have me write this thing and put it out there for others to read and then I’m going to die in some freakish accident. And then this blog post will circulate like wildfire and my picture will be on the nightly news with that sappy, soft music playing as a smiling picture of me slowly pans across the screen.”

Obviously, I’ve already played it out in my mind in a weird, detailed fashion, but after I call myself back down from the crazy-brain ledge, I deeply breathe in God’s love for me and my children. The kind of crazy love that says, “Mom, I love them more than you. Can you trust Me?” The Bible says we are but a mist, here one day, gone the next, but we can trust God with our mist.

So what keeps this momma from finding herself in the fetal position, overwhelmed by “what ifs?”

And, then we have Easter. Jesus walked straight into death’s face. Was He scared? The Bible tells us He sweat drops of blood the night before. But it also says, “His face was set.” He knew what He had to do and He followed the voice of His Father right to His death.

The Son of God allowed Himself to be murdered so our sins would be paid for. So death could never more be held over our heads. He died so that when He rose again on the third day, He could speak straight to death’s ugly face, “O Death, where is your victory? O Death, where is your sting?” (1 Cor. 15:55) He defeated it.

Previous articleTo My Kids: It’s Not About Winning. It’s About Giving It Your All.
Next articleSobbing in My Minivan Over Honor Roll

Heather Gilionhttp://dancingonmyashes.com/
Heather Gilion co-authored the book, Dancing On My Ashes: learning to love the One who gives and takes away. She experienced great tragedy 15 years ago, but now she uses her God-story as a platform to encourage and equip others. Heather is a product of God's redemptive plan of taking our ashes and creating beauty. Heather is a speaker, worship leader, author, and artist (browse her art at StoryDesigns). She and her husband, Dallas, serve at LifePoint Church in Ozark, Mo. They have two boys: Noah, 9, and Zachariah, 6.