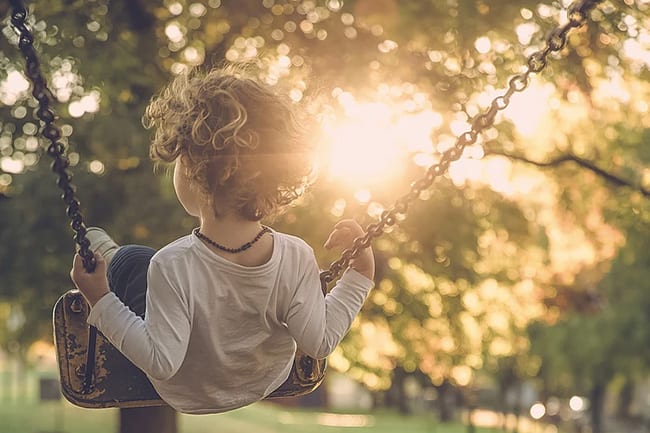 When They Outgrow the Playground

On any given day, I can ask my kids what they want to do and they’ll want to go play at the park.  It’s a simple thing.  A place we go and they’re off.  They’re running, climbing, swinging.  They play both together and independently, challenging themselves or just having fun.  They make up complex games and even involve other kids.  Or sometimes they gather acorns, leaves, and rocks, collecting their treasures with a seriousness that breaks my heart.

Because I know these days won’t last forever.

The day is coming, very soon, when it will be over.

I have noticed lately that they’re on the older end of the kids playing there.

I remember coming when I was a new mom, with my two toddlers unsteadily walking around.  I had to climb onto all of the equipment with them, following their unsteady feet up the steps, sitting behind them on the slides or scrambling to catch them at the bottom.  I would push them in the swings for hours, even when they knew how to pump on their own, they’d still call me to do it.  I used to watch them on the platforms, standing underneath, praying they wouldn’t fall.  They never did.  Somehow they survived and got more stable, and we all got more confident.

At the time, I saw the moms of older kids, sitting on the sides chatting with each other and I looked forward to the day I could sit on the benches too.  I watched the older kids running around and wondered if they were getting too big to be here.  It seemed like a place designated for the littles.

Now I’m that mom.  I’m the mom sitting with my friends as our kids run around.  My kids are the big kids the moms of the toddlers are watching with one eye and wondering if I’m keeping tabs on them.  I am, but I also know them well enough by now to know that they’re not going near the toddlers, they’re much too careful even though it’s hard to see while they’re moving so quickly.

I also know that this is the end.  Pretty soon they’re going to trade in their time at the playground for time on their cell phones. Creative play has peaked.  When my daughter started school this year she informed me with major disappointment that her new classroom had NO TOYS.

I wish they’d stay young for just a little bit longer.  Marveling at the feel of the swing going higher and higher at the playground. But that’s how this parenting thing works.  Just when you start longing for them to grow up just a little, when you think you could never push your kid again on a swing and you’d be just fine, you find yourself in the midst of the next stage, wishing you could go back, just for a minute to feel it all again.  Or that it would at least slow down so you could savor it for a little longer.

This piece originally appeared at the-othermom.com, published with permission.

Previous articleAshley LeMieux: What A Failed Adoption Taught Me About Courage
Next articleDear Husband, I Loved You First

Caroline Murrayhttp://the-othermom.com
Caroline is a freelance writer, wife, and mama to two young children and one sweet baby.  She's been featured on ScaryMommy, Her View From Home, TODAY Parents, Filter Free Parents & others.  She loves everything country and tries not to take anything too seriously.  You can see more of her at www.the-othermom.com or like her on Facebook at www.facebook.com/theothermom05.