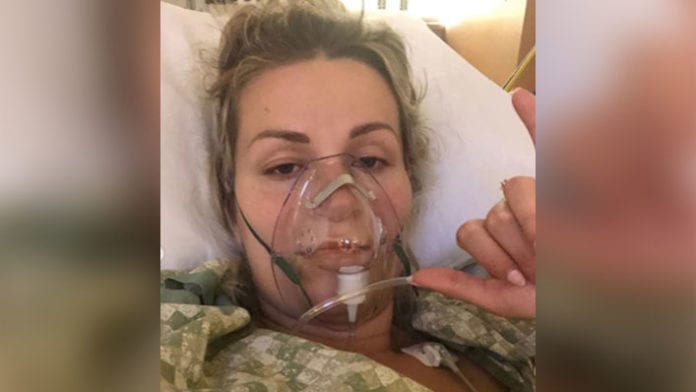 A 27-year-old COVID-19 patient from Vancouver, Washington is being called a “walking miracle” this week after giving birth to her daughter, while fighting for her life in a medically-induced coma.

Angela Primachenko was 33 weeks pregnant when she tested for the novel coronavirus on March 24, after experiencing a fever and other COVID-19 symptoms.

Just eight days later, she was fighting for her life in the ICU. Breathing through a ventilator, Primachenko found herself in a medically induced coma.

To ensure she had the best chance of survival, while also protecting her unborn child, doctors at Legacy Salmon Creek Medical Center induced labor at 34 weeks. And while her body was being supported completely by machines, fighting a virus that has ravaged the world, Primachenko gave birth to a healthy baby girl.

Her twin sister, Oksana Luiten, had been keeping family and friends updated throughout the frightening ordeal, asking for prayers on Instagram for a “miraculous healing.”

Hey social media family and friend We are asking for prayer for my twin sister Angela, she has been diagnosed with Covid 19 and has been in the ICU for the last 3 days… and she is 33 weeks pregnant😭. She isn’t doing well, but we as her family are fixing our gaze on Jesus the miracle worker. We ask for prayer as prayer is powerful🙏🏻🙏🏻 we ask we unite as a community and pray for a miraculous healing.

In the week that followed, Primachencko began to recover, her body working overtime to heal itself from COVID-19, and childbirth. And miraculously, she made it to the other side.

“I feel like I’m a miracle walking,” Primachenko says.

On April 6, she was taken off of the ventilator after being intubated for 11 days. One look down at her body told her that her baby must have been born.

“Obviously nobody expected that I was going to get that sick, so no, absolutely not, I did not expect to deliver my child,” she said. “After all the medication and everything I just woke up and all of a sudden I didn’t have my belly any more. It was just extremely mind-blowing.”

She was later moved from the ICU — a major milestone in her fight against coronavirus. Doctors, nurses, and medical staff in the ICU sent her off with a standing ovation.

HUGE DAY TODAY!!!! #praisethelord Still currently at the hospital, in isolation but today I graduated from the ICU to the floor’!!!’ 🙌🏼🙌🏼🙌🏼🙌🏼🙌🏼🙌🏼🙌🏼. Correction sadly I still can’t have any visitors because I still I am corona positive #coronasurvivor

Due to COVID-19 protocol, Primachenko, who was released from the hospital on Saturday, has not yet been able to hold her daughter, Ava, who remains in the neonatal intensive care unit. Ava did not test positive for COVID-19, but her fighting mama is required to have two negative COVID-19 tests before she is allowed in the NICU with her daughter.

Her husband, David, and their 11-month-old daughter, Emily, did not test positive for COVID-19, so David has been able to hold Ava in the NICU.

Baby Ava is still in the NICU and i still haven’t been able to see her in person 😭😭 . . but so thankful for amazing nurses who send me update photos!!! @jennifer_ristau2 was able to take a pic of my baby girl for me!!! CANT WAIT TO MEET YOU my little fighter!!

As she patiently awaits being able to hold her daughter for the first time, Primachenko says she hopes her story will be a beacon of hope for others during this difficult time.

Previous articleDear Stay-at-Home Mom, You Have Something to Pass on That’s Not Contagious
Next article6 New Exercise Habits You Can Build While Social Distancing