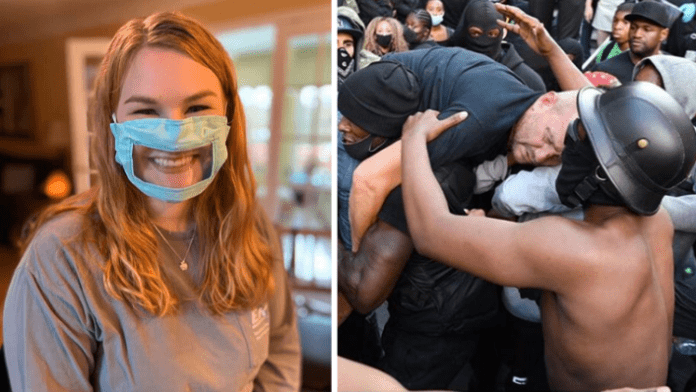 It may feel like the world is overflowing with opinions these days, one thing we can all agree on, is that 2020 has tested our faith in humanity.

Between a global pandemic, a national stay-at-home, months of isolating with your family, murder hornets, masks, heinous murders of our black brothers and sisters, protests, the Black Lives Matter movement, and a new normal of social distancing while still being unsure about what is safe in public, the start to the new decade has been quite the minefield.

If you’re anything like me, you’re probably feeling overwhelmed like never before, and hardened by the news-grenades that shake up our feeds on what seems like an hourly basis these days. But friends, there is still GOOD happening in the world.

Lately, I’m reminded often that the news media—while it exists to inform—does more to breed fear, destruction, and division, than anything else. And I’m constantly reminded of John 10:10, in which Jesus said: “The thief comes only to steal and kill and destroy. I came that they may have life and have it abundantly.”

In need of some good news, we compiled some of the best good news stories the internet has to offer. Our hope is that they serve as a reminder of the positivity that is still happening despite the chaos that is 2020.

1. This 11-Year-Old Girl who became pen pals with hundreds of USPS workers.

Emerson, my 11 year old, is on a bit of a wild ride with the @USPS and our local mail carrier, Doug.

And, I think there’s a deeper message to it all.

After writing a letter to her post man, 11-year-old Emerson became the recipient of hundreds of letters from USPS workers around the country. After her father’s Twitter thread about Emerson’s “wild ride” with USPS went viral, Taylor Swift even sent Emerson a package!

One thing Em has said over & over this week is “this isn’t a girl writes a letter story, it’s an anyone can write a letter story.”

And, she’s right. We can all take small steps with a big impact.

But, she’s also wrong … when the woman writing the letter is @TaylorSwift13. pic.twitter.com/LylyJWdWh9

2. These Las Vegas Shooting Survivors Got Married to Each Other

After he saved her life during the Las Vegas Massacre in 2017, these two tied the knot in the middle of the coronavirus pandemic of 2020!

3. This Amazon delivery driver praying over the house of a sick child

#7sHero: We tracked down the @Amazon delivery driver who stopped to say a prayer at one of the houses on her route in Nampa. We’ll tell you why she did it, and why it touched so many hearts. Join us tonight on @KTVB. pic.twitter.com/3m8jqwW7Ui

Derek and Raquel Pearson’s 8-month-old son, Lucas, has a heart condition and difficulty eating. Doctors warned that if he contracted coronavirus, Lucas could go into respiratory distress. When Amazon delivery driver, Monica Salinas, saw a note on the family’s door that their son’s food was essential, she felt led to pray for them–and it was all caught on camera.

4. This college student who created masks for those who are hearing-impaired

“I felt like there was a huge population that was being looked over because we’re all panicking right now, so a lot of people are just not being thought of,” Ashley said.

5. This 15-year-old who beat cancer and was greeted by a social distancing parade

After finishing her final round of chemo, Coco was surprised by her family, friends, and community with a social distancing parade to celebrate BEATING CANCER!

6. This Black Lives Matter protester who carried a counter-protester to safety

7. These nurses who used their only free time on shift to pray on the roof

When you have a few extra minutes at work you take the time to go to the Helipad and pray. We prayed over the staff in…

“To pray is to turn over kingdoms.

To kneel in humility and uncertainty of the times toward the certainty of Love and Peace is an act of holy war against anxiety and fear.

To silence the voices of doom before the presence of God and stand in prayer for our colleagues fighting in every minute, here and all over the world.” -Commoners Communion

8. This single dude who adopted a little girl with down syndrome

She had been rejected by 20 families and when he held her in his arms, he says he knew she was his daughter, “immediately.”

9. This Reddit user who wanted to encourage his mom and got SO much more!

Reddit user, Gaddafo, posted a photo of his mom holding her 2nd painting. Discouraged, she thought no one would like it. Instead, the internet responded with an epic picture in picture painting of his mom, and the thread is incredible.

10. This mom who gave birth while fighting coronavirus in a medically-induced coma

Angela Primachenko was 33-weeks pregnant with her second child when she was first diagnosed with COVID-19 in late March.

The virus was so aggressive that the young mom from Vancouver, Washington was hooked up to a ventilator and placed in a medically induced coma. It was during that time when doctors decided to induce labor as a way to give both mom and baby a better chance at life.

After 17 days in the ICU and nearly a month after giving birth to her daughter, Angela finally got to meet her baby.

12. This white cop who stood in solidarity with protesters in Flint, Michigan

“The only reason we’re here is to make sure that you got a voice.” Sheriff Chris Swanson told protesters as he laid down his helmet and baton to support black lives in his community of Flint, Michigan.

13. This couple who has been married 67 years and was reunited after being separated for 5 weeks due to coronavirus

Joyce and Don, who have been married nearly 70 years, were finally reunited after COVID-19 forced them to separate from each other for 5 weeks.

14. Mister Rogers’ powerful stance against racism is being remembered for all the right reasons.

In 1969, around the first anniversary of Martin Luther King’s death, Mr. Rogers asked Officer Clemmons to join him and soak their feet together in a pool of water on a hot day.⁣ ⁣ Their feet stood side by side in a plastic wading pool and both men sat silently, contemplating without a word. Then Mr. Rogers proceeded to help Officer Clemmons dry his feet. Just a few years before, many public pools were off limits to black Americans.⁣ ⁣ François Clemmons talks about when he started to see Mr. Rogers as a father figure: “On April 4, after Dr. King was assassinated in 1968. That was a tremendous blow to me personally and politically and emotionally. My world was absolutely shattered. And I was living in what they call Schenley Heights in Pittsburgh, a black bougie neighborhood…When April 4 came and Dr. King was assassinated, they were burning down the Hill District [a historically black neighborhood in Pittsburgh], which was six, seven blocks from [me]. I had only been there eight or nine months, and I was terrified of what was going to happen.⁣ ⁣ I remember Fred Rogers called me and said, ‘Franc, what are you doing? How are you doing?’ He knew where I lived. And at one point he said, ‘We’re concerned about your safety. We don’t like that you’re over there. I’m coming to get you’…I never had someone express that kind of deep sense of protection for me…and that experience drew Fred and me really, really close. I thought, Well, this is the real thing right here.”⁣ ⁣ 25 years later, when Officer Clemmons retired, his last scene on the show revisited the same plastic wading pool. Officer Clemmons asked Mr. Rogers what he had been thinking about during their moment of silence a quarter century before. Mr. Rogers told him he was thinking of the many ways people say “I love you.”⁣ ⁣ Source: Officer Clemmons: A Memoir (2020) by François Clemmons

15. This mother and daughter graduated from medical school together and got placed at the same hospital for residency.